This is a scene a couple of blocks from where I live. 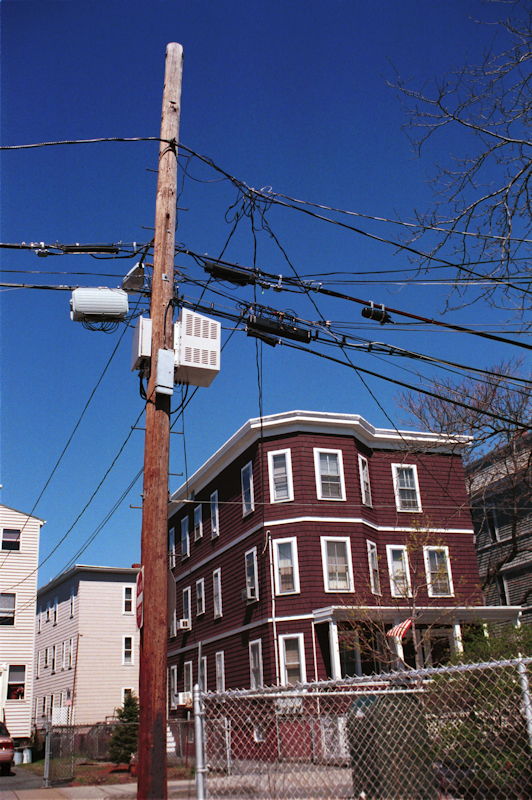 The curvature of the pole isn’t just distortion from the cheap zoom lens; it really is leaning over slightly.

When I first moved to America, one of the things I noticed was the ugly cabling everywhere. Not just cables, either—big cylindrical metal transformers are stuck out in plain view on the tops of poles. I’m not alone in noticing this; friends who’ve visited from the UK have also taken pictures.

If you’re American, you might be wondering what the alternative is. Well, basically you bury the cables under the ground. Or failing that, you string up the cables, but you bury the ugly complicated transformers and cross-connections underground, or hide them away behind bushes.

Burying cables underground costs more, of course—or rather, it costs more initially. New England is known for wet snow and ice storms, which have a tendency to rip down overhead cables. I can’t help wondering how much money is spent fixing broken cables that wouldn’t have been damaged if they’d been routed underground. It wouldn’t be practical to dig cable tunnels across (say) Arizona, but you’d think they could manage it for a densely populated area like Boston.

What I particularly like about this example of American craftsmanship is the horizontal rectangular metal box just beneath the second-lowest cable on the right. You can’t see in the picture when it’s scaled to web size, but the only thing holding the box in place is that it’s lashed to the cable above it with some kind of insulating tape.

This pole is a metaphor for America. You don’t notice it initially, but once you’ve been here for a while you realize that the entire country is lashed together temporarily until something better comes along. As you travel west, it becomes more and more obvious.

In Seattle, I went on the Seattle Underground tour. No, it wasn’t a secret political movement; for those who don’t know the story, I’ll explain.

The city of Seattle began to grow up around the sawmill, at the water’s edge. The road the trees were slid down was named Skid Road, the origin of today’s “Skid Row”—for obvious reasons, nobody wanted to live there.

All proceeded nicely until the invention of lavatories and mains drainage. At that point in history, the good people of Seattle decided they wanted the finer things in life. They built a sewer system which would dump their effluent into the Puget Sound, where it would drift southwards and end up somewhere unimportant (i.e. Tacoma).

There was just one snag: the moon. More specifically, the tides it caused. Tidal flow would tend to block the outflow, leading to a buildup of gas and liquids in the sewer pipes. When tides were particularly strong, or the gas caught light, the trusty W.C. would be transformed into a kind of winnit enriched miniature version of Old Faithful. Sometimes the streets would even be flooded.

Various solutions were proposed for this. A few desperate people even built their outhouses on stilts, with ladders up to the toilet. Finally, engineers studied the problem and concluded that the city needed to be somewhere from two to ten meters higher up. Ideally, closer to the top of that hill.

As luck would have it, a few years later in 1889 Seattle was razed to the ground—partly because an enormous fire broke out, and partly because enterprising amateur firefighters tried blowing up other parts of the city with dynamite to prevent them from burning down and spreading the fire. The local government hastily convened and proposed resettling further uphill. A cunning plan, but doomed to failure—the people who had built downtown Seattle and had become rich on timber sales owned all the land next to the Puget Sound. The last thing they wanted was for their prime real estate to become worthless. They stubbornly began rebuilding the city in its previous location.

The city government wasn’t giving up, though. As a compromise, they declared that the city would be built higher, but in its original location. Thus the roads were built raised up from three to ten meters from the ground level of the buildings. For a while, building owners would helpfully place ladders from the sidewalk up to the street.

Eventually, however, it became obvious that having a deep trench around your building was an accident waiting to happen. New sidewalks were built above the old ones, level with the street, with glass skylights to filter light down to the “ground floors” below ground. After a few years, most building owners gave up on their old basement ground floors, and moved further up their buildings. Sometimes the old ground floor was left empty; often it was used for storage.

Hence Seattle ended up with two cities—the everyday one above, and a secret one below. The UnderSeattle gradually filled up with horse excrement washed off of the streets, and came to be inhabited by the poorest of the poor.

As Seattle grew, it became clear that the rebuilding hadn’t been done with skyscrapers in mind. After a few buildings collapsed into sections of the underground, most of it was closed off or filled in. Today only a few sections remain safe enough to see; it makes a fascinating tour. Who says history is dull?

Stanislaw Lem once criticized Philip K. Dick for continually writing about worlds full of kipple—fake realities, badly constructed out of trash, hiding chaos and evil beneath. Dick responded that it was the only kind of world he knew, living in California.

At the time I took it for some kind of comment on the people of California—the fakeness of Hollywood, the flakiness of San Francisco. I now realize that it wasn’t a metaphorical comment; it was far more mundane than that. America is literally like that—a cleverly constructed fake. It’s insufficient to fool the intelligent eye, but just good enough that most people act as if it’s real.

The house up the street has mass-produced fake timbers on the outside. To my eye they look absurd, the woodgrain simply printed on in a repeating pattern. The average American walks past without registering anything odd about the scene. The same goes for the fake stonework, fixed—apparently without irony—on many buildings in downtown Boston.

So I live in a world which is (as Phil Dick put it) “only apparently real”.