This is the Hancock Tower in Boston’s back bay: 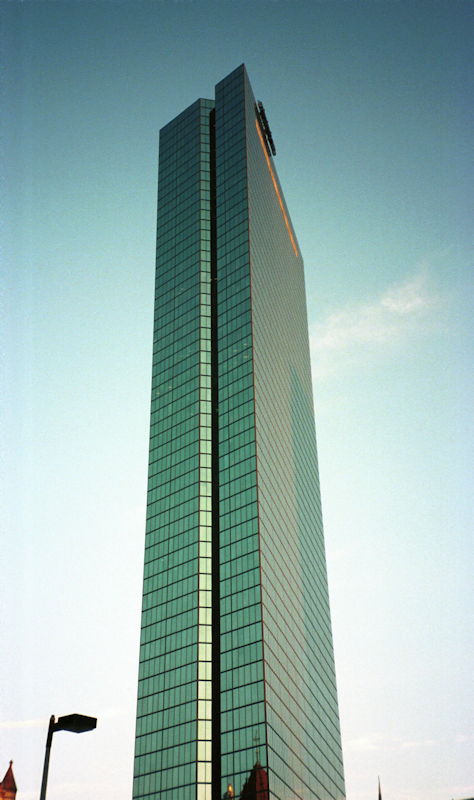 It’s easily my favorite building in the city. It was designed by I.M.Pei’s firm of architects—but not, I believe, by I.M. Pei himself. Most long-time Boston residents remember that when it was first constructed, the large sheets of glass in the windows began to rain down on the streets below. Sheets of plywood were used to replace the missing windows, and there was a long and expensive lawsuit. Unfortunately, that’s where a lot of people’s knowledge ends. They shake their heads at the impracticality of architects’ designs, and mentally file it as another example of ego over substance.

The truth is somewhat different. It turned out that the construction company had not followed the structural engineers’ designs to the letter. Under pressure to cut costs, they had used thinner and cheaper glass for the windows. As a result, when winds blew past the building and caused a partial vacuum, the windows would bend outwards until they broke free of their frames. Once all the glass was replaced with the kind specified in the design, the problem went away.

Today the tower stands at peace. It almost resembles the monolith from “2001”—sleek, dark and its inner workings mysterious. You can’t see in the picture, but the western side has a darker colored stripe or slot near the top, which reminds me of a Cylon warrior’s eye slit or KITT’s light strip in “Knight Rider”. It almost seems as if the monolith is sitting watching the city beneath it, aloof and mysterious.

On summer evenings, the side of the building is perfectly angled to catch the sunset and reflect it back at you as you walk along the back bay. The front is carefully angled to reflect the Trinity Church in Copley Place. It’s a masterful piece of design—stark minimalism that fits perfectly in context.