This is a picture of Filene’s department store, at Downtown Crossing in Boston: 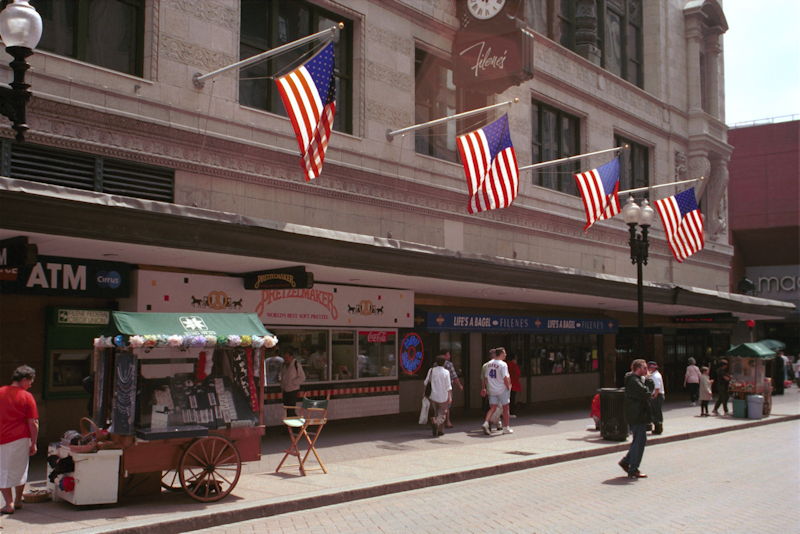 I took it because I liked the way the flags were lit up. I don’t know if it’s deliberate, but in early afternoon the sun peeks around the corner of the building just enough that to shoppers walking towards the T station, the flags are illuminated from behind with sunlight, while the front of the store remains in shadow. This gives the flags a beautiful translucent glow.

Flags are one of the things that make America different from other countries I’ve visited. Nowhere else do you see so many flags. Well, maybe Red Square on May Day in the old Soviet Union; but in the USA it’s parade day all year round. Walk down any street and you’ll see houses with flags outside.

Of course, in England practically nobody flies a flag outside their house. Partly that’s because the symbol of the Union Flag has become co-opted by football hooligans and other nationalist yahoos—about the most positive image of British flag-waving you’re likely to encounter in everyday life is tanked-up Public Schoolboys from Oxbridge waving it at “Last Night of the Proms”.

Beyond that, however, there’s something about flag waving which is—to an English mind at least—so frightfully vulgar. Flags don’t seem to have quite the same connotation in the USA, which I find interesting. Yes, right-wingers and nationalists and neo-nazis wave the flag—but so do card-carrying liberals.

I think part of the explanation is that America is still undecided about so many things. That includes the question of whether waving the flag represents the first amendment, or possibly the second. Is it celebrating freedom of persecuted minorities, or oppression of other persecuted minorities?

The flag is ubiquitous. It means almost anything—and so it means almost nothing. For me, it quickly became one more piece of visual noise for my brain to filter out as I walked down the street. Still, once in a while some particular accident of location or lighting will push the image into my consciousness, and remind me where I am. And I’ll take a picture.