I first visited the USA in 1990, travelling with a Japanese friend. We wanted to visit New York and Boston. Most people would have stayed in New York, and travelled to Boston; but I remember having a hunch that things would be better the other way around. So we spent more time in Boston, and reduced the New York visit to a long weekend.

Perhaps my problems with New York stem from the fact that we were politely relieved of our excess cash by a gentleman who had taken it upon himself to introduce visiting tourists to the city. I don’t think that was the real problem, though; I’ve had worse experiences in other cities that I still like. No, I think my real problem with New York was one of expectations.

I’ve been to Birmingham, and I don’t feel the need to speak out about how awful it is because, well, nobody really expects any different. But New York gets fetishized as the ultimate city, the place everybody secretly wants to be, the cultural center of the universe. If I’d merely been expecting a large, seedy, run-down looking city with a bunch of art galleries, I would have been OK—but I had been lead to expect so much more.

Still, it has some impressively tall buildings. 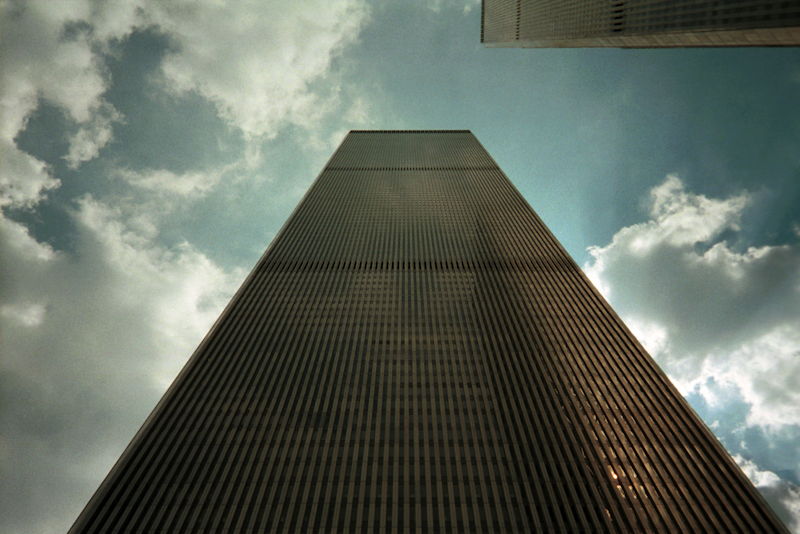 I took some photos from the top of the World Trade Center, but it was pretty dull up there. You couldn’t look down, because there was a fence to keep you away from the edge, and anyway the edge just leads to a wide safety ledge a few meters below. You could look out across the city, but the street level was mostly shrouded in a brown haze of smog. Ultimately the whole thing was like a lot of the art in the city—the most impressive part of the experience was the concept.

No, the best place to experience the World Trade Center was from the bottom, looking upwards.