I got a new watch. Again. I bought my last watch in 2001. There was nothing wrong with it. However, Casio brought out a new version that drops the moon phase and tide graph, and instead has 5-band radio atomic clock synchronization. 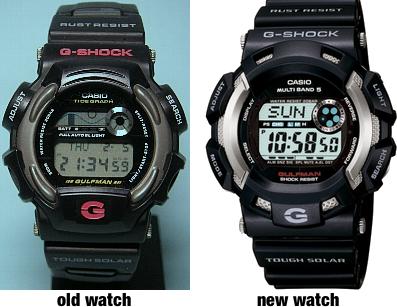 As you can see, it’s not a major departure, visually speaking. The function of the buttons is slightly rearranged, the actual time is larger and easier to read, the time zones don’t have editable names, and the alarm now has a snooze function. Other than that, it’s pretty much the same watch. Still titanium, solar powered, waterproof. But with the atomic clock synchronization, it’s one step closer to being the perfect watch–which, by my definition, is an indestructable watch that requires zero maintenance.

I have a mild obsession with accurate timekeeping. The first watch I ever remember owning was the Timex I had as a child. It was a simple analog watch that required regular winding. Its clockwork mechanism was fairly awful as far as accuracy goes, and I had to adjust it each morning.

Next, I got one of the first ever digital watches: a TI-500 from Texas Instruments. Mine was brown plastic with a brown leather strap. Since I was a kid at the time, it got scratched up pretty quickly. It also ate batteries. Still, I loved it; and I bet if I’d kept it, it would sell for a bundle on eBay. But technology was changing rapidly, and before long I had my first LCD watch, a Casio. Casio would soon take over the watch market, almost destroying the Swiss watch industry. My contribution to this process was one of these: 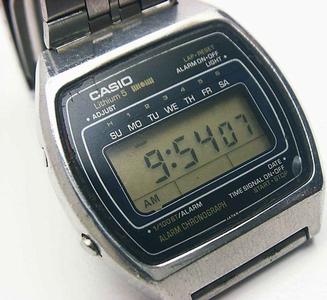 That was the watch that never died. It lasted me through the 80s. I also had Casio calculators, but I’m happy to say I never had a calculator watch. I just wasn’t that geeky.

Since I love swimming and tend to be forgetful of whether I’m wearing a watch, I eventually upgraded to a waterproof Casio, again with a metal case and strap. I don’t remember too much about that one, except that once the battery needed replacing, it stopped being waterproof. I’ve found out you can actually still buy the waterproof metal Casio I had.

In addition, as the 90s arrived the backlash had happened, and digital watches were about as fashionable as flared trousers. So I looked for a watch that was waterproof but didn’t need batteries. For a while I wore a Swatch automatic. Aside from the lack of batteries needing replacement, I liked that it was totally unlike any other watch I had owned. Also, the back was transparent, so you could see the mechanism. It kept pretty good time, but still needed weekly adjustments.

So, then came the Seiko Kinetic, which I wrote about before. Then, back to Casio. And now, atomic. I don’t know why atomic time synchronization is so seductive to me. It’s not like I need that level of accuracy in my timekeeping. Nevertheless, all the computers are synched via NTP, and we have a couple of radio synchronized clocks too. I think there’s just something fascinating about time, and about the idea of knowing it precisely. When Harper’s recently published an issue that had a whole feature about the debate over leap seconds, it was like they had published it just for me. Part of the fascination is that time is so mysterious. From the point of view of the laws of physics, you can treat it as another dimension; and physics itself doesn’t seem to care about which direction time flows. Yet our perception is that time is utterly unlike any other dimension, that it has a clear direction–and nobody can explain why that is the case. We simply don’t know what time is, even though we can measure it with very high precision.

So now I know what time it is. For sure.