Chris Morris has pushed the boundaries of comedy for years, and his first full length movie continues that trend. It’s a dark comedy about a group of aspiring Islamic suicide bombers living in northern England.

Like most English comedy, it’s played straight. In fact, Morris spent three years doing research–talking to police, secret service, imams, ordinary Muslims, and a former Gitmo detainee. He went along for a ride with Muslim kids on a Saturday night, and tried to learn about what their life was really like and how real Muslim radicals actually behave. At the same time, he researched every terror trial transcript he could find, mining them real-life ludicrous events.

So although the movie is a comedy, it doesn’t resort to the ridiculous exaggeration of (say) “Whoops, Apocalypse”, and it is absolutely not an anti-Muslim movie. Instead, I got the impression that Chris Morris was content to be less funny than he perhaps could have been, in order to stay true to the subject matter.

The truth is, terrorists are not all criminal masterminds. Perhaps the best example is Abdullah Hassan Taleh al-Asiri, the Ass Bomber. He tried to assassinate Prince Mohammed bin Nayef by detonating an improvised explosive charge in his rectum. It ripped him to shreds, but only lightly injured the prince, who continued with his social schedule for the rest of the day.

The protagonists in “Four Lions” make similarly bad choices; for example, one of them spends his time trying to train crows to fly small explosives into McDonalds. Another is a white convert to Islam who is determined to outdo everyone else with his radicalism.

If you think you can deal with a movie that mocks incompetent would-be terrorists, I strongly recommend “Four Lions”. It was the funniest movie I’ve seen in years–and at the same time, made some serious points about how governments are prosecuting the “War on Terror” in a completely counterproductive way. The movie makers even have suggested background reading.

Oh, and I won a “Brother Crow” action figure: 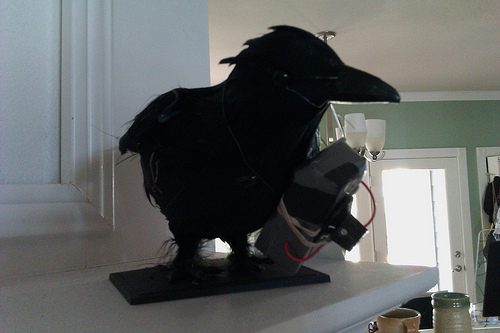