When we moved to our current house, we soon encountered an old squirrel who considered our back yard his territory. For the last six years he has visited regularly, gradually getting tamer and tamer. In 2006 he got mange, and we treated him. Eventually he decided it was OK to take peanuts from my hand. Throughout the years he remained Alpha Squirrel, seeing off all challengers.

But a few weeks ago, I noticed he had an injury to his left front paw; some sort of swelling on one of the fingers. Sadly, it has gradually been getting worse. I think he has been unable to dig and forage normally, because he has been gradually losing weight. As of tonight, the growth on his paw has ballooned to the size of a large marble, and the rest of the limb is swollen and doubtless infected. He’s moving by limping along on three legs, so I suspect he’s not long for this world. 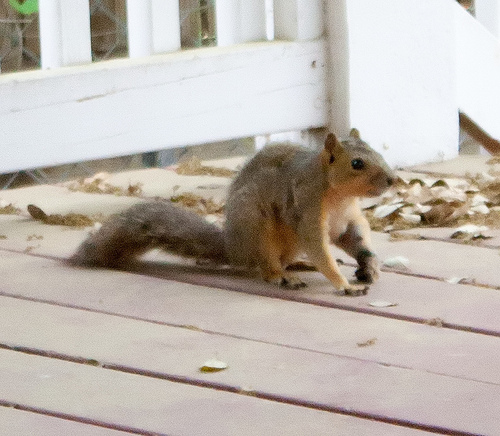 The picture is blurry because he’s keeping his distance now, and only coming out in the evening when he’s less visible.

He was old when we first met him, judging from the pattern of stripes in his tail and his wrinkled face. He must be over 10 years old now, which is pretty good going for a squirrel. Here he is, in happier times: 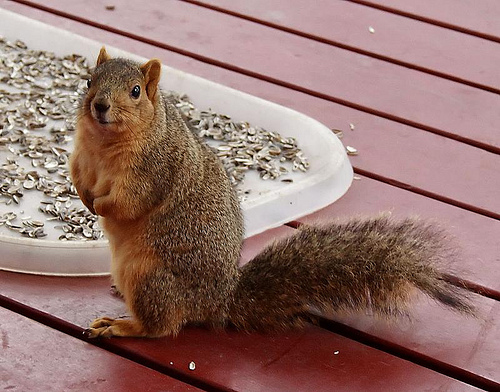 I’m pretty sure there’s nothing can be done for him at this point. Even if we got him to a vet, he’d probably lose the limb. A squirrel isn’t a housepet, and a three-legged squirrel isn’t going to last long in the wild.

So, goodbye little buddy. Hope you appreciated the water bottle and all the nuts. We’ll miss you.