People who have worked with me in the past will be aware that I’ve never been a big fan of shoes. For pretty much my whole professional career I would arrive at the office, take off my shoes, and wear just socks for most of the day. It helped that at my first post-graduation job, my manager went a step further and was barefoot most of the day. I’ve always felt that if we were meant to wear shoes indoors, we wouldn’t spend money on carpet.

Part of my dislike of footwear is probably down to the same issues that inspired most of series 2 of the radio version of The Hitchhiker’s Guide to the Galaxy. For those who’ve never listened to it, the radio series was the first incarnation of the story, and is very different from the books and the TV show. Much of series 2 was a thinly disguised satire on the UK shoe industry, which in the 70s and 80s was utterly incapable of producing shoes that would properly fit Douglas Adams.

I had the same problem, though probably for different reasons. My feet aren’t particularly large, small, narrow or wide, but they are flat — not in the fallen arches sense, rather they are of limited thickness from bottom to top; they lack “depth”, as shoe manufacturers describe it. For years I would have to wear insoles to get shoes that would fit even passably well. Dr Seuss and Orbital may have wished they had duck feet, but it wasn’t all that great as far as school shoes were concerned.

Like many problems, the shoe one disappeared when I moved to the USA. For some reason, America seemed to be able to produce shoes that would fit me. And in recent years, even my old nemesis Clarks has made shoes that actually fit my feet really well and are comfortable — but not comfortable enough that I want to wear them all day. Since moving to Texas meant that there were only a few months of the year where foot coldness was a serious problem, and since I work from home, these days I’m probably barefoot 90% of the time.

There are, regrettably, a few situations where shoes are still mandatory. In summer, the concrete and pavement in Texas get hot enough to burn your feet. I’ve had experiences rather like firewalking just from going out to fetch the mail. And while I’ve encountered people who are prepared to risk their feet to the broken glass and other hazards of the general urban environment, I’m not that brave.

So having said all that, it probably won’t surprise you when I reveal that I joined the Vibram FiveFingers cult a few weeks ago. I’d actually been thinking about it for months, but I held off for a while to make sure that hipsters weren’t going to start wearing them. I ended up getting the Sprint variant, not because I plan on running in them, but because my heels are quite narrow, so I favored a strap rather than a pure slip-on like the Classic. Strap aside, I wanted the most minimal shoe possible, and the dull gray color is nicely inconspicuous. Of course, I’m talking about Austin, where people wear flip-flops to weddings; even gray FiveFingers might attract comment elsewhere. 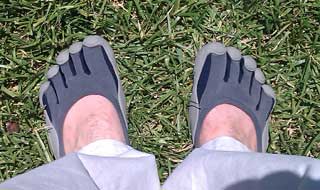 If you’re not used to walking around barefoot, there is definitely a learning curve. Barefoot walking and shoe walking are very different. Even I felt a bit footsore after an hour-long walk around the neighborhood.

There are other options in the “minimal shoe” movement, like VIVOBAREFOOT and Wushu shoes, and even big name brands like Merrell and Nike are getting in on the market. Some of them look a bit more like normal shoes; the downside is your toes don’t get to move independently as much. How much of a health benefit there is to totally independent toe movement, I’m not sure; I just know that I tend to wiggle mine when they’re not constrained, so the “foot glove” approach seemed appealing to me.