Way back in the mists of time — 1996, in fact — I was living in dear old England, pondering whether to emigrate. One Saturday I wandered into my local CD store to trawl the discount rack for anything that looked interesting. On my way there, a CD on the countertop next to the cash register caught my attention: 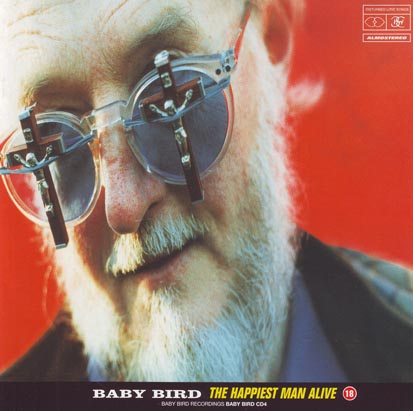 I had no idea what the hell it was, but the cover photo had me intrigued. “Baby Bird”, it said, “The Happiest Man Alive”. A tiny infobox at top right promised “Disturbed Love Songs” in “ALMOSTEREO”.

I picked it up and looked at the back cover. A circle of stars, each with text, presumably track titles. Three paragraphs of text in the middle, telling a story, ending:

…He wants to be someone else. The radio crackles off. All the lights go out. A bomb has dropped. Like a siren slowly starting up, the power fizzles on, with a thing by Baby Bird. The kid’s head stops shaking. He picks up the Panasonic and throws it through the window…

A note at the bottom said “Any imperfections or crackles may result on this record as the vinyl has to be reconstructed from melted down Level 42 and Queen albums”.

It was a bit Paul Morley without the pretension, and it’s fair to say that it was calling to me on the basis of the cover alone. I asked if I could listen to some of the actual music. Here’s what I heard as it started:

A few minutes later the CD was mine. And so it was that I fell into the world of Stephen Jones, aka Baby Bird.

I listened to not much else for a week or so. The album sounded like it had been recorded on a four track in someone’s bedroom, and it probably had, but that wasn’t important. Like Sparks, what grabbed me was the lyrics. Intelligent, humorous, unexpected; sometimes laugh-out-loud funny, sometimes creepy. Here’s the start of “I Didn’t Want To Wake You Up”:

I didn’t want to wake you up (excerpt)

I learned that Baby Bird had quietly recorded five albums’ worth of material over the course of six years, and that each one was a limited edition of a thousand copies. Now I had a mission.

It may be hard to understand now if you’re under the age of 30, but back before the Internet became ubiquitous it could take years to find a particular album. Every time I visited a new city, I’d check out the record stores, just on the off chance. I still remember the excitement of finding an album I’d been looking for for five years, in the two quid sale rack in a record shop in Beaconsfield. I won’t bore you with all the details of my quest, but I eventually found all five CDs. Five albums of gems like this, an excerpt from “Hate Song”:

I’m not used to having music I listen to appearing in the charts. I’ve learned that what I think of as approachably mainstream can often clear rooms. In the 90s I’d read NME to find out what they were slagging off, and then listen to that because it was usually at least interesting. Now here was something good, and so bizarre I would never have thought it would appeal to anyone, and it was a hit. I just didn’t understand England any more. And I left.

Apparently there had been some sort of bidding war based on rave press reviews of the lo-fi albums, and the hit single was the start of a new Baby Bird, contracted into a single word and expanded into a full band. I was lucky I’d managed to track down the CDs, as they were fetching ludicrous prices on eBay.

A full-band Babybird album followed. Initially I hated it, but I decided I was probably being hipsterrific and resenting the fact that everyone was now listening to something I thought was my secret. I gave it a second chance, and decided I still didn’t like it as much as the lo-fi recordings. Something had been lost in the slickness and professionalism; some of the songs sounded like they had been polished and re-recorded until all the life had been squeezed out of them.

The next album, “There’s Something Going On”, was much better — and much darker. The first track, “Bad Old Man”, is a case in point:

And that’s sweetness and light compared to “Take Me Back”, which I still find hard to listen to.

Every Babybird album since then has been a delight. Apparently it just took an album or so for Stephen Jones to learn how to bend a full band to his will. It was worth the wait, for tracks like this:

But if you want the grimy lo-fi originals, which I’d highly recommend as a starting point, pick up the boxed set of the remastered versions. It’s a bit tough to find now, but well worth seeking out. Alternatively, you can buy the albums from Google Music in DRM-free 320kbps MP3. If you want to start with one of the slicker more commercial albums, my personal pick this week would be Ex-Maniac.

In the mean time, you can catch up with Stephen Jones as @babybirdmusic on Twitter. He’s got a book out. That old guy on the cover of the album that first caught my attention? His dad.