This evening I went out for a walk; partly for exercise, partly for relaxation, and partly to take a package to the UPS drop-off. As I rounded the corner onto Oltorf Street, I walked under a large tree which partially overhangs the street. On the ground I saw the unmistakable shape of a partially crushed dead baby bird. A few steps on was a second baby bird, as dead as the first, with ants crawling over it.

I tried to put the scene out of my mind and continue with my walk. Moments later I heard a plaintive tweet to my left. I looked over, and saw a third baby bird, very much alive, in a small depression in the grass. I walked over to investigate.

I wasn’t sure how it had ended up over in the grass away from its nestmates, but that had probably saved its life. The grass was soft, and the small hole it was in had probably kept it out of sight of any predators. I crouched down to take a close look; the bird saw something moving overhead, and started tweeting and opening its beak for food. It looked like a young grackle fledgling, covered in partially-opened pin feathers.

I stood up and considered what to do next. The branches of the tree were out of reach. Theoretically it looked climbable, but not without entering the nearby property—and that was surrounded by a wall-like fence about my height, with big warning signs on the outside saying “Beware of the Dog” and “This area under 24 hour video surveillance”.

Obviously the bird’s chances of survival in its current situation were negligible. If it didn’t starve to death, it would probably be finished off by a passing cat, possum, raccoon, or other predator. 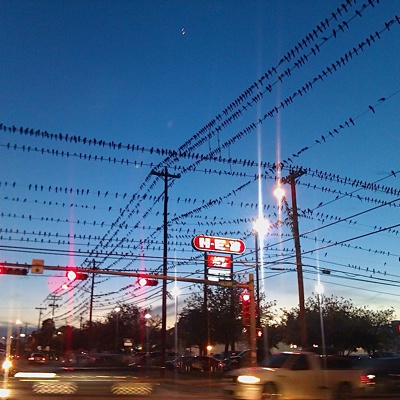 Now, it has to be said that Austin is not short of grackles. Not even slightly. Nevertheless, they are a protected species, and this particular grackle had done nothing to deserve his perilous situation. I gently scooped him up with a postcard and placed him in my courier bag. He was my problem now, at least until I could find someone who was licensed and qualified to look after him.

A couple of grackles on the telephone cables overhead became very agitated. They were obviously the parents. I looked around again, and saw the nest on the sidewalk about four meters from where the baby bird had been, back over by the two dead ones. I took one last look around to make sure there really wasn’t any way I could get the nest back into a tree, then regretfully picked up the nest and walked home.

Once I was home I grabbed a suitable size shipping box from the recycling, cut a hole in the top, and put the nest in it. I then put some soft gardening gloves on and carefully moved the baby bird back into the nest. He seemed uninjured, but tweeted anxiously. Once he was back in the nest he settled back down; I’d taken the nest because I figured it would be the least disturbing place to put him. After a minute or so he closed his eyes and started breathing in a slow, relaxed way.

I quickly searched Google for information on baby grackles, and found the site of a wild bird center in the Florida Keys. The instructions said not to give the bird any water, and I didn’t have any suitable food, so I just left him to rest. Another Google search located a licensed wildlife rehabilitator in Austin. I called for advice.

After discussing the situation, I left the bird safe at home and went back to see if I could locate the homeowners with the big fence. The plan was to ask them if they might be interested in climbing their tree and putting the nest somewhere secure, putting the fledgeling in the nest, and watching to make sure the parents stuck around to look after him. It would be significant work, but it would obviously be the best thing for the bird. Unfortunately they were quite definitely out, as evidenced by a package waiting for them on their doorstep.

Dusk was approaching, so time was short. I called the rehabber again. She mentioned that she already had a young grackle in the incubator, and could take another. I offered to bring him to her immediately, and she agreed. Pausing only to take a couple of photos, I set out. 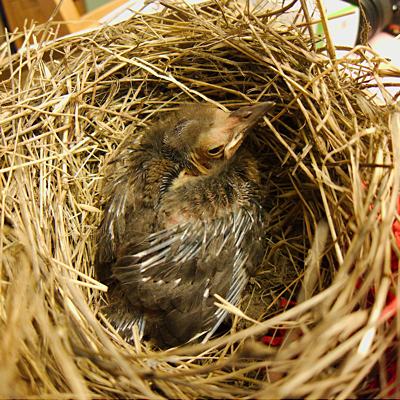 It was a scenic twenty minute drive out west; not how I’d expected to spend my evening, but quite pleasant all the same, even with the occasional loud tweet from the passenger seat. Stephanie the rehabber weighed and inspected the fledgling and confirmed that he seemed uninjured, and a healthy weight too. The prognosis was generally good. I filled out the paperwork and left a donation.

So that was how I spent my evening. Rescuing a grackle. If all goes well, maybe this summer he’ll get to sit in the trees outside H-E-B and crap on my car.