When we returned from our vacation, Chestina the parakeet didn’t look too good. She had terrible itching and feather loss around the eyes, a dirty vent, and generally appeared ragged. Her head feathers had some kind of yellow material on them. I was concerned that she might have early stage scaly face, a mite infestation that’s a common budgie illness. We took her to the vet, and a physical examination revealed a serious abnormality, so we agreed to pay for X-rays. (Crazy bird parents!)

It turns out that her body cavity is full of tissue, and her belly and digestive tract have been pushed down out of position. She is having trouble breathing, and trouble digesting food. The yellow on her face is from her regurgitating to try and clear the way to digest her meals.

It’s probably some sort of cancerous growth on the liver or some other internal organ. There’s a very faint chance that it’s merely a bad inflammation from some internal bacterial infection. The vet suggested that euthanizing her was an option to consider. I wasn’t ready to give up, though, so I have antibiotics to dose her with for the next week or so.

Chances aren’t good, though. She’s spending her time fluffed up and wanting to sleep. If there’s no improvement by midweek, it’s probably going to be time to send her to the big outback in the sky.

Here’s a photo of her in happier days: 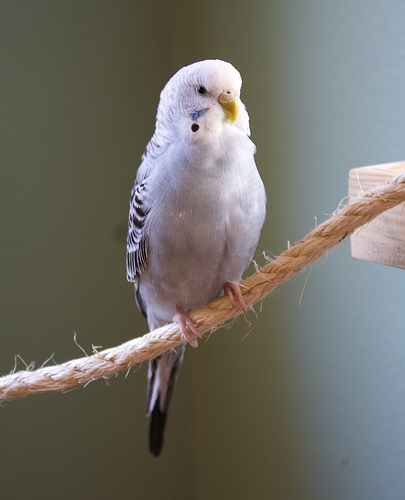 She’s not even 5 years old. I really expected her to live longer. If there’s any consolation in this situation, it’s that there’s really nothing we could have done about this. It’s just cruel random fate.