We arrived at our hotel in Costa Rica late in the afternoon. After resting briefly, we walked to the bank nearby and got some cash, and then walked down the street in search of food. We arrived at a restaurant called Las Delicias del Maiz. The sign said “restaurante tipico”, which is the phrase to look for if you want to try Costa Rican food. I ordered a random platter without meat, and Horchata. 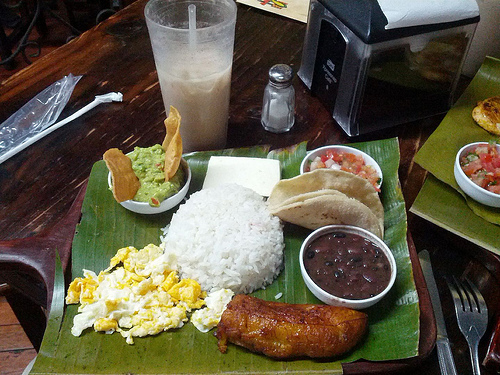 After a few years of living in Texas, what arrived wasn’t entirely unfamiliar. Clockwise from top left there’s guacamole, queso fresco, pico de gallo, some corn tortillas, black beans, a fried plaintain, and some scrambled egg. The big difference from Mexican food, at least as found in Austin, is that there wasn’t any spice applied. Being a “When in Rome…” kind of person, I ate Costa Rican food quite a lot while we were there, and after a few days the blandness did start to get to me. When we got home the first thing I did was eat curry for three days in a row.

The hotel reception breakfast buffet the next morning was more to my taste: pineapple, papaya, bananas, and fresh coffee from Doka Estate got me started. I think it was the first time I’d ever enjoyed hotel coffee without needing to sugar it. Normally in US hotels, even coffee from the mini in-room drip machines is vicious stuff. 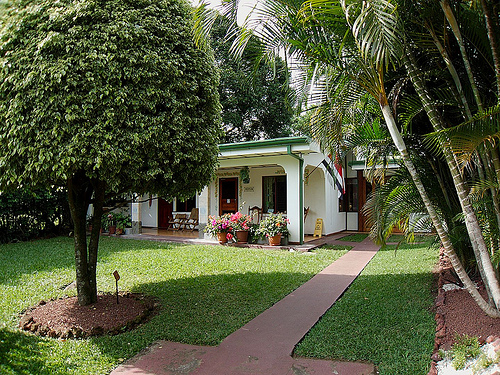 We decided to head into town, as I wanted to get a prepaid SIM card. The hotel was just off route 3, which has several bus services into Alajuela. I’m not exactly sure how many, because like many things in Costa Rica, it’s all a bit uncertain. There didn’t appear to be anything like an actual bus schedule or route map, even when we got to the terminus. The buses do have signs indicating their destination, but that’s all the help you get. They stop at bus shelters, major landmarks, and other random completely unmarked locations.

A red bus went past, followed by a bus airbrushed in a Nordic Viking theme with wolves. The hotel receptionist had suggested that the green bus was a safe bet, so we waited for that one. It arrived soon enough, and was crowded with a random selection of locals, ranging from an ultra-fashionable young woman with her iPhone, to an old lady with a big shopping bag, to an apparently unattended boy about 10 years old.

The route went past a supermarket called Mega Super, where we got off and bought a couple of random essential items. As we waited for the next bus, a kindly old lady wandered past and decided that since we were obviously tourists, she should warn us about the danger of bag snatchers.

One thing I’ve noticed about traveling the world is that pretty much anywhere you go, people will regale you with dire warnings about how terrible the crime is. With a few rare exceptions, the warnings always seem to be wildly overblown. Maybe it’s different in peak tourist season, but I didn’t see any evidence of cars being broken into, bags snatched, or tourists robbed at knifepoint. The only real evidence of crime I saw was graffiti. Some of the banks had armed guards, but then that’s standard practice in many nations. 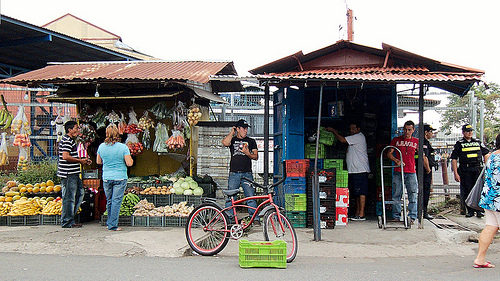 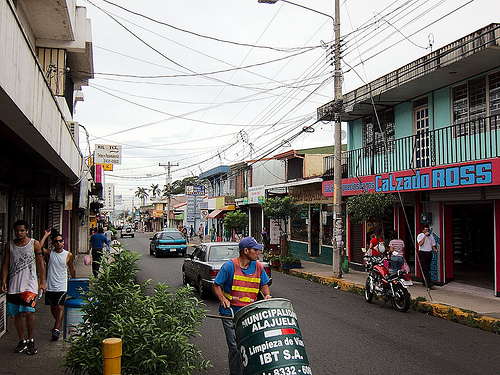 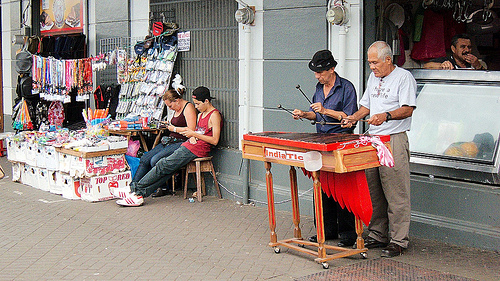 If you did want to pickpocket, Alajuela’s narrow crowded Saturday morning streets would be a good place to do it. The place was a riot of sounds, colors and smells. After sorting out the whole SIM card thing, we gradually made our way towards the center of town, and found ourselves in a beautiful park. Families were relaxing and children were playing. Suddenly I noticed that some of the children were standing around a large tree—they were feeding squirrels! 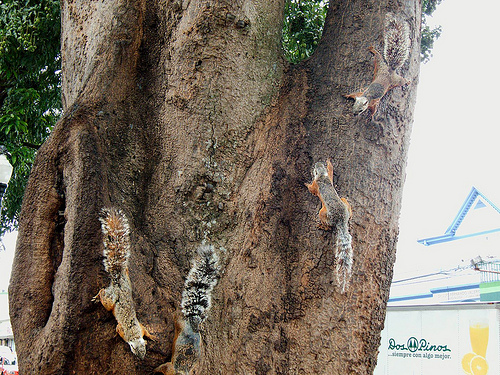 Costa Rican squirrels look much like gray squirrels in shape, but their coloration is completely different. Some had stripes, some had heads that were a different color from their bodies—there didn’t seem to be any standard pattern. The pigeons were just the same as any North American or English pigeon, though. 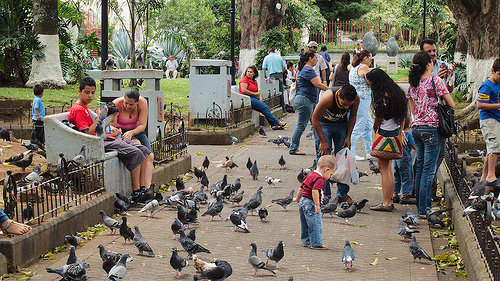 After wandering the streets at random for a while longer, we started heading back to the bus depot. On the way we stopped off at the big central indoor market, which reminded me of similar markets found in San Antonio, except crammed into a much smaller space. A couple of empanadas hit the spot, and the GPS led us back to the bus we needed for our return trip.