After our bus tour of Doka and Poas, we reluctantly decided that we were going to have to drive. By this time we had a pretty good idea of what to expect, so we knew that we needed something with 4 wheel drive and good ground clearance. We rented a mini-SUV.

If you’re planning on driving in Costa Rica, then based on our experiences, here are some things you can expect to encounter:

Here are some things you should expect to encounter very infrequently:

Also, unlike in the USA, seeing a speed limit sign that says 60kph does not mean that you can actually drive at 60kph safely. On one memorable occasion a 60kph sign was immediately followed by a hairpin mountain bend with no guard rail.

Oh, one more thing: drink-driving is legal in Costa Rica. All things considered, it’s a very good idea to avoid trying to drive at night.

Once we had the vehicle sorted out, we headed to La Paz Waterfall Gardens. While the waterfalls promised natural beauty, our first call was to the large aviaries. In one of them, toucans mingled with humans. 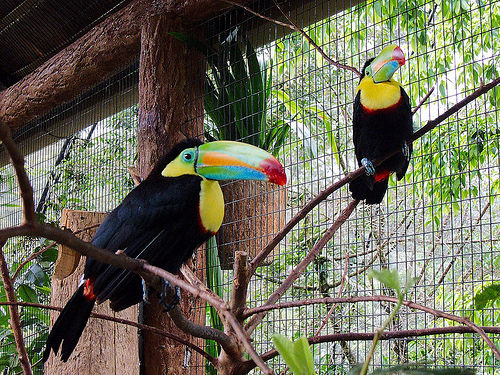 They eat by catching fruit and insects in their beaks, then tossing it back and catching it again closer to their jaws. Apparently their large beak is also involved in thermoregulation. (You might say that like us, they tried to keep cool in summer and ended up with an enormous bill.) They’re also pretty tame and mellow birds. Some people even keep them as pets. Like parrots, they are zygodactyl. 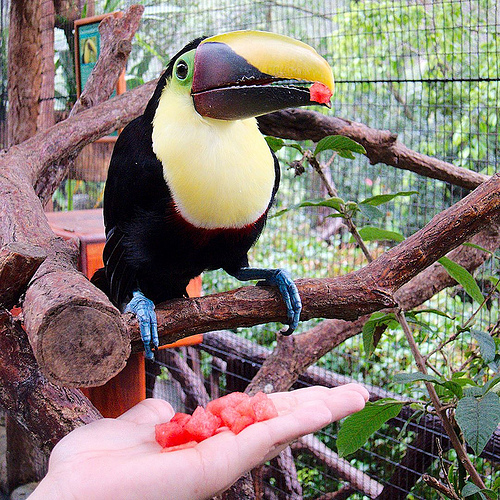 There were also parakeets. These two amused me because they were sitting together, each perched on one foot, crunching their beaks—just like our budgerigars do. I also noticed how much a macaw in flight resembles a giant budgie.

La Paz also has an amazing butterfly garden. The common blue morpho might be common, but its appearance is amazing, and they grow up to 10–15cm across. 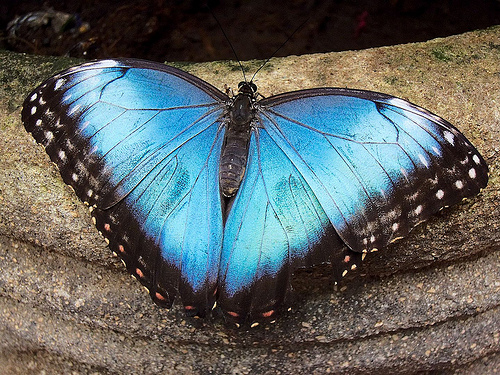 The other side of their wings is decorated with fake eye patterns, to attempt to scare off predators. 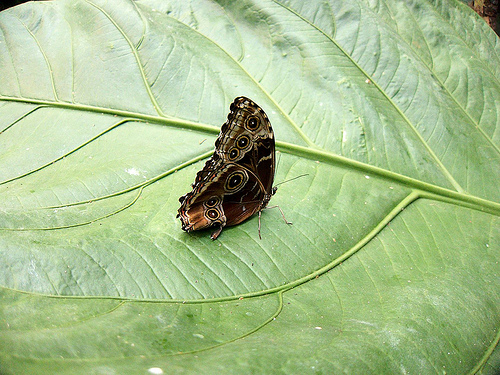 Next was the hummingbird aviary. We get hummingbirds outside my office window at home, but the variety here was amazing. 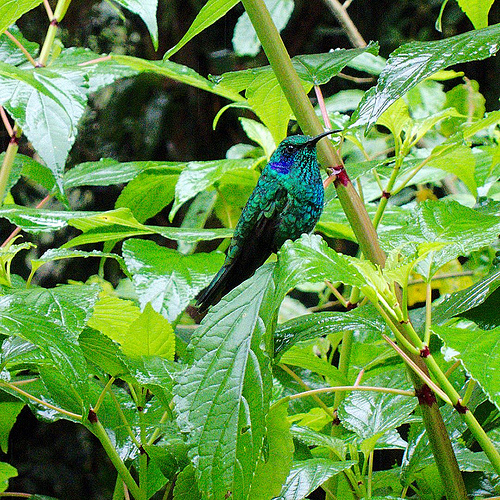 By this time it was raining quite enthusiastically, and everything was lush and green. 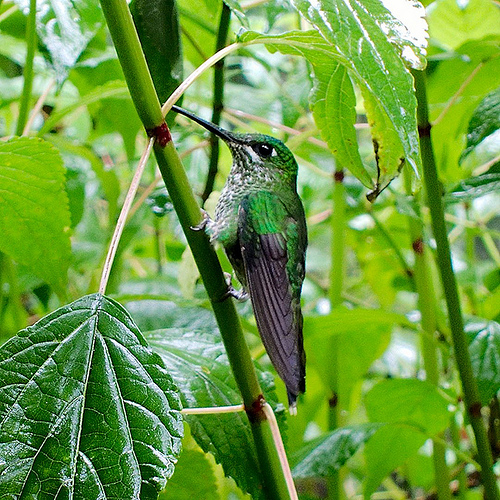 We took refuge from the rain in the serpentarium. I’m not a big fan of snakes, but I’m not fearful of them either. However, as we looked at one snake I heard a strange sqeaking noise, which quickly began to sound distressed and then suddenly went quiet. I realized with faint horror that it was lunchtime for the snakes.

I understand that snakes have to eat. I accept that constrictors aren’t going to be satisfied squeezing the life out of a block of tofu or a nut cutlet. Nevertheless, I can’t imagine wanting to keep one and feed it. We left and took refuge in the next exhibit before anyone else got a chance to be invited to lunch.

The next exhibit turned out to be an even better nightmare for health and safety than the uncaged monkeys at Zoo Ave. The amphibians were housed in three hot, moist greenhouse-like rooms full of plants, and we were invited to wander through and look for the poison arrow frogs. 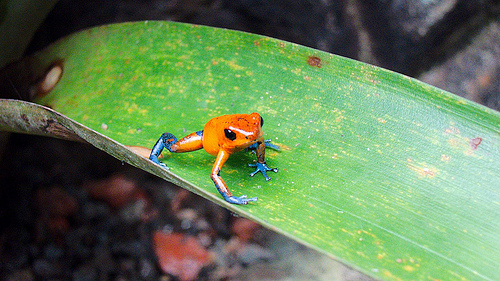 Do not lick happy orange frog. Also, signs said to be careful where you stepped, because there could be frogs anywhere. It was an interesting task looking for them, because many of them do not want to be seen. 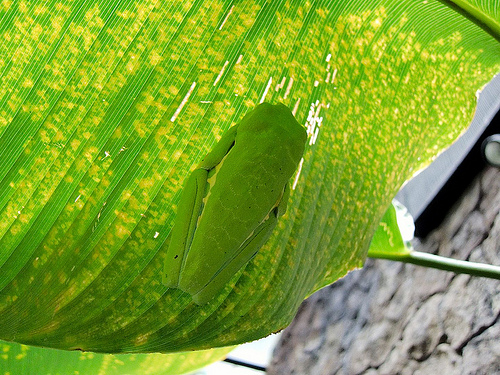 However, not all were shy and eager to cling to the undersides of leaves. 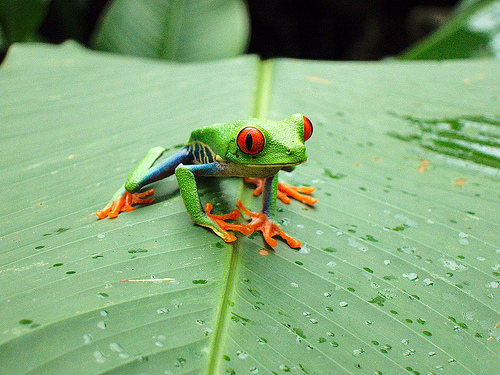 Once the rain let up a little, we decided to head through the cloud forest trails to the waterfalls. 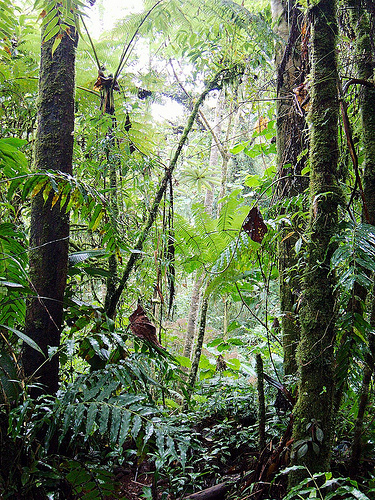 Some of the heliconia had ripe blue berries, and birds were foraging for them. 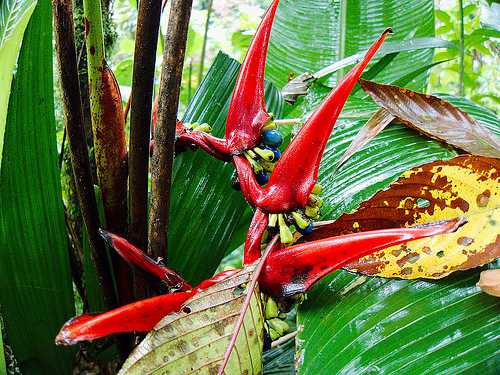 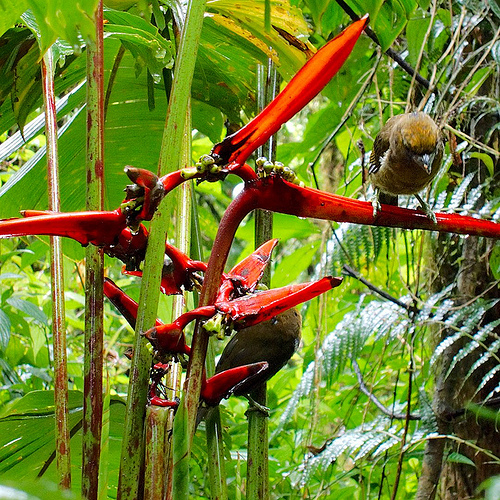 By the time we neared the first waterfall, the rain was picking up again. I noticed my watch was covered in water droplets; thankfully it’s a G-Shock. I took shelter under some trees and stashed my phone in a Ziploc bag I had brought with me for the purpose. 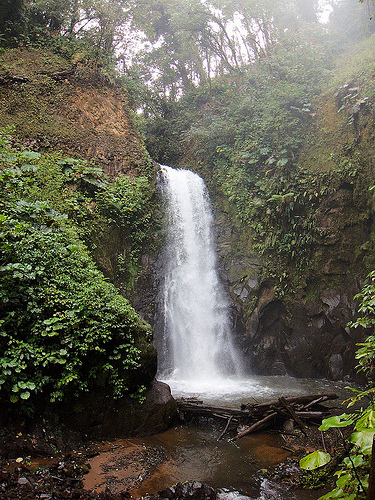 By the time we got to the second waterfall, I was starting to worry about the camera. 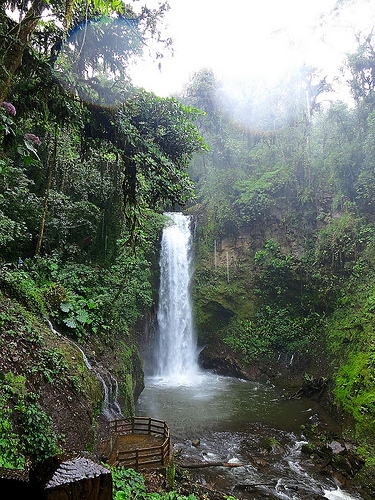 We decided we had seen all we needed to see. Since La Paz is in the same general vicinity as Doka, we went back to Grecia to find food. Thanks to a recommendation from Foursquare, we found some excellent pizza.

We drove back to the hotel planning to dry out and relax. We got to within 100m of the entranc and found the following scene: 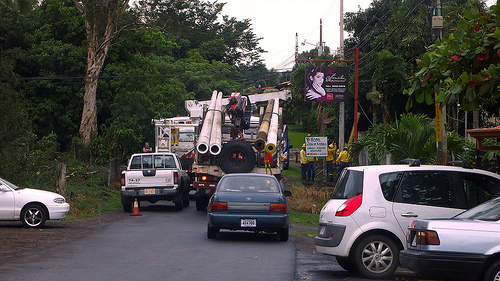 The storms we had enjoyed at La Paz had apparently passed by the hotel, and a large mango tree had fallen—and taken with it three electrical poles and the associated cabling. The road was blocked by four separate ICE trucks, while off to the left men with chainsaws were attempting to cut the tree into pieces small enough to move.

We drove around the neighborhood and established that there was absolutely no other way to get to the hotel by road. At that point, we parked and sat at the nearest bar, which offered a good view of the festivities. They didn’t have any electricity, but happily they didn’t need electricity to serve beer. 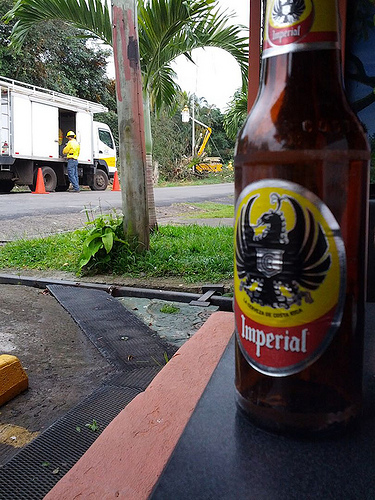 There seem to be two main varieties of beer local to Costa Rica: Pilsner and Imperial. We preferred the Imperial.

I used my phone’s WiFi sharing and the SIM card so that rothko could check e-mail via her tablet and I could check my inbox too. We managed to arrange to visit The Ara Project the next day.

Around sunset, three beers later, the road was clear enough that we were able to return to the hotel. The electricity didn’t come back on until around 9pm, and the water supply was off until then as well. We didn’t care. These things just happen in Costa Rica.