Thursday, we visited The Ara Project. Visits are by appointment only. I had contacted them by e-mail, and been told that the best time to visit was about 10:30, and that they were available on Thursday.

We set out in our rented mini-SUV, and had almost made it to our destination when we hit a roadblock—the main road was closed for maintenance. I looked at the GPS, and picked what appeared to be a reasonable alternate route. We turned down a side street, went through a dirt-track barrio, and discovered that the road ended and turned into a run-down railway line.

At first I thought we were at a dead end. However, a red taxi was ahead of us, and it began driving down the railway tracks. I figured that if a taxi could manage it, we could too, and followed at a discreet distance. After a while we found ourselves in the parking lot of a disused factory. The taxi was out of sight, and I wasn’t sure where to go next, but after a little driving around we found our way back onto a legitimate road, which turned out to head straight past the airport Holiday Inn Express.

A few minutes later we were outside the gates to The Ara Project. The gates and a nearby door were securely padlocked, and from inside I could hear the sound of barking dogs mixed with the squawking of macaws. One of the key reasons for touring at around 10:30 is that the birds have usually finished breakfast and are relatively quiet then.

I knocked on the door, and peered through a gap. I could see something red and feathery. After a minute or two, a Costa Rican woman came to the door. I showed her the e-mail on my phone, and she used her phone to call Jenny Pettigrew, the New Zealander who is one of the team now running the project. After some dog herding, Jenny showed us around.

The Ara Project was originally started by Margot and Richard Frisius, Americans who retired to Costa Rica. They initially started looking after rescued parrots, but soon began a breeding program aimed at returning birds to the wild.

A large part of the breeding center grounds is used for growing fruit and vegetables to help feed the birds, as feeding a couple of hundred macaws can get pretty expensive. 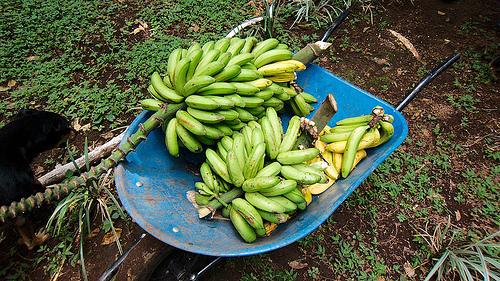 First we visited the scarlet macaws. Since these birds are being bred for release in the wild, the focus is on trying to keep them as wild as possible, which means minimizing human socialization. Nevertheless, they were curious to get a closer look at the bipedal apes. 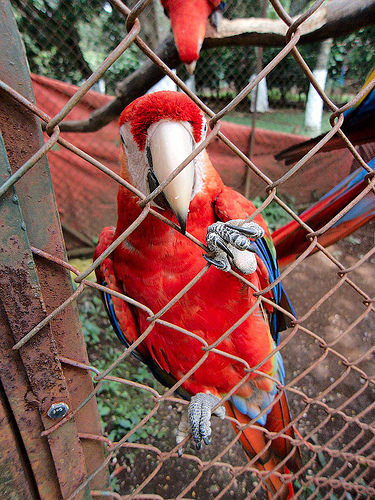 They weren’t so happy about the camera, though, and climbed away nervously. 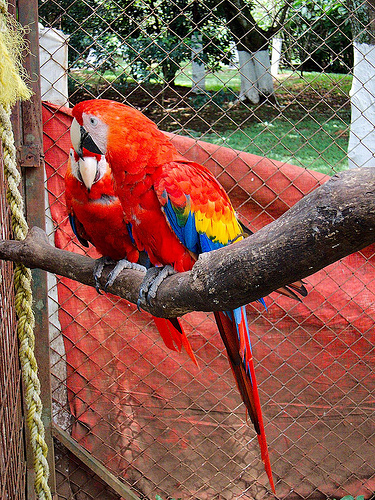 So far the Ara project has released over 80 scarlet macaws into the wild, with a survival rate close to 90%. The great green macaws are more of a challenge, because in the wild, the great green only likes to live in the mountain almond tree. Sadly, the mountain almond became a very popular hardwood for manufacturing furniture once carbon steel blades became available to cut the wood, and rapid deforestation began. In 2008, Costa Rica banned the logging of mountain almond trees in order to try and save the macaws’ habitat. Replacement trees have been planted in some areas, but it will be decades before they are large enough to provide homes for great green macaws. 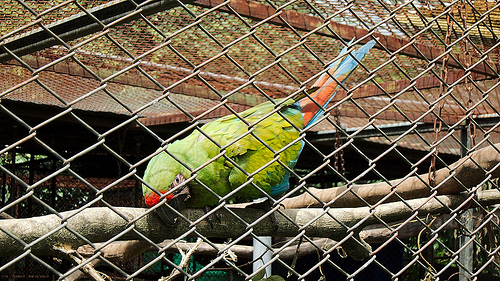 There’s some hope, though. It turns out that the macaws bred by the Ara Project are less picky about their diet and nesting. The project had 20 great green macaws who were almost ready to head off to a new release site. 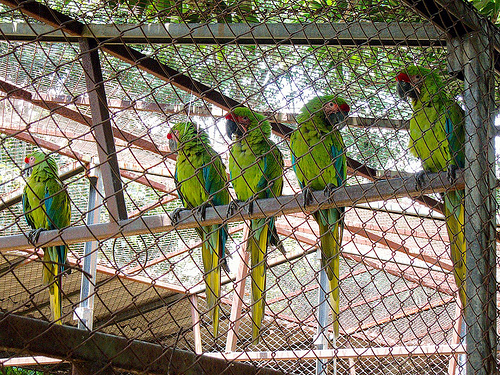 We also got to take a peek at some baby macaws of various ages. There are few things uglier than a baby bird. 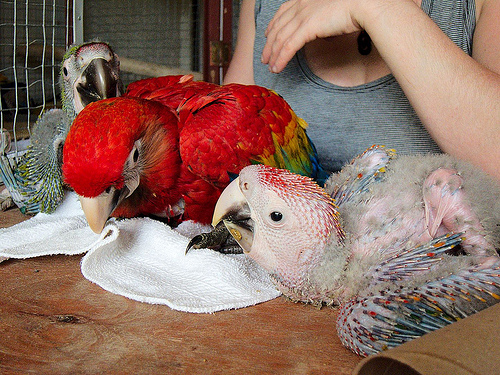 You can see some of the feathers starting to emerge from their sheaths. I really can’t imagine what it must be like having keratin shafts growing out of your skin. The babies were soon returned to the safety of the incubator.

At the end of our visit we met one last scarlet macaw, Evea. She was also a youngster, but sadly she had fallen on the ground when very young and been attacked by some kind of critter. She had been patched up by vets, but her left wing was permanently damaged, so she would never be able to fly. For this reason, she had been picked to be the Ara Project’s avian ambassador, a parrot who visitors and school children would be able to interact with. 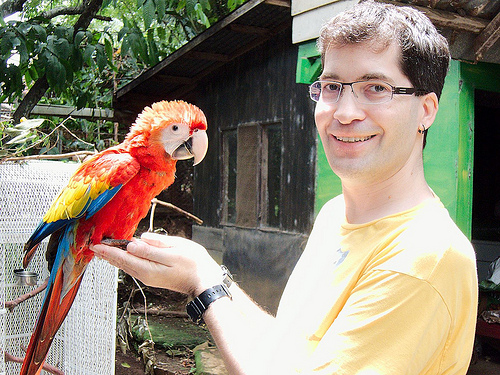 The story isn’t over, though, and there may not be a happy ending. Although the Frisiuses handed over the Ara Project to a charitable trust fund, the land is now owned by their heirs—and unfortunately, the family wishes to sell the land. So far sale has been delayed by the fact that the land is zoned for agriculture, and so of limited value to urban developers. However, the project could find itself homeless in the future. In the mean time, they are trying to increase fundraising efforts. If only I were a billionaire philanthropist… It amazes me how much has been achieved by so few people.

Check out The Ara Project online for more photos. They also have a YouTube channel.