Our next Costa Rican destination was Santa Elena, near Monte Verde. This presented some logistical challenges. The distance from Alajuela to Monte Verde is around 75km as the macaw flies, but unfortunately there are some rather large mountains in the way. Once you factor in meandering roads, the route ends up being around 130km.

In addition, the people of Monte Verde are concerned about what’s happening to areas of Costa Rica that are popular with tourists. They’ve looked at Jaco 50km south, and decided that they don’t want any part of that. Hence they have vigorously fought against any improvement to the roads between Monte Verde and the rest of the country. Any trip there absolutely requires a 4 wheel drive vehicle with good ground clearance; there’s 35km of hillside dirt track to negotiate.

We were told that the drive could take up to 4 hours, depending on traffic and weather. To avoid having to drive unlit mountain dirt tracks in bad weather at night, we needed to be sure we’d be at least as far as the Pan-American Highway before sunset around 6pm. Hence we decided we would drive to Santa Elena, find a place to stay overnight, and return to Alajuela the following day.

The early part of the drive was straightforward. We took route 3 from right by the hotel, and headed west. Traffic was light to nonexistent, and once we hit the foothills the scenery become beautiful. 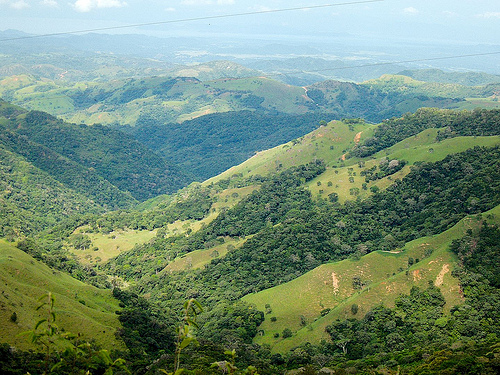 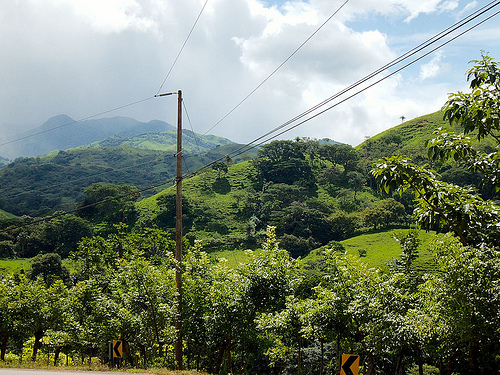 The final part of the drive was mostly unpleasant because of the sheer noise of driving over dirt track. I was amused to see an old woman on a 4-wheel ATV (quad bike); she had a plastic milk crate fixed on the front for her groceries.

Then abruptly we hit the triangle of roads that make up the center of Santa Elena, and suddenly there were coffee shops and restaurants everywhere. For an area that doesn’t want lots of tourists, it’s pretty damn touristy. Since rothko had used her coffee business connections to get in touch with someone from the Santa Elena Coffee Cooperative, we headed to their coffee shop. 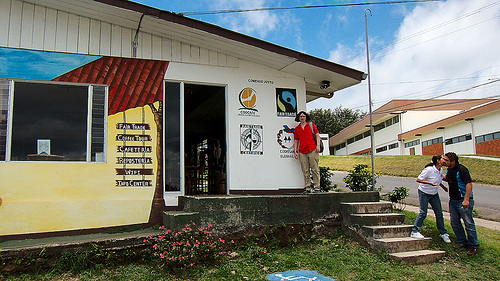 Our contact, Marco, was already there. He served us coffee, and suggested that we could visit his family’s farm. We jumped at the chance. We drove with him back out of town, and soon found ourselves heading down into a secluded valley. 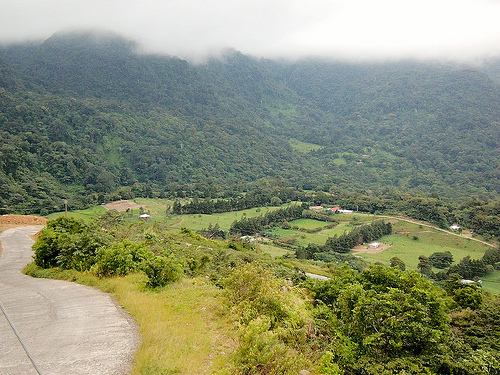 The farm is certified organic, and it was obvious that the agricultural practices were completely sustainable. The coffee bushes weren’t arranged in neat rows, like at Doka; here, they were scattered seemingly at random. They were also allowed to grow to their full height. 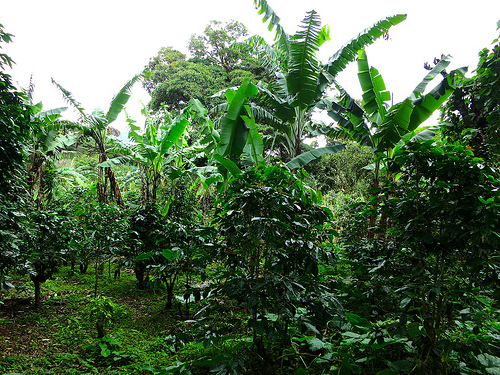 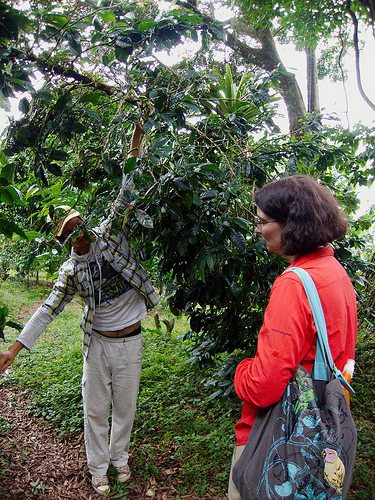 Between them were banana plants, which I hadn’t seen before visiting Costa Rica. They are very strange. The male flowers grow inside a purplish flower pod or inflorescence, which grows at the end of a long descending tail-like stalk. 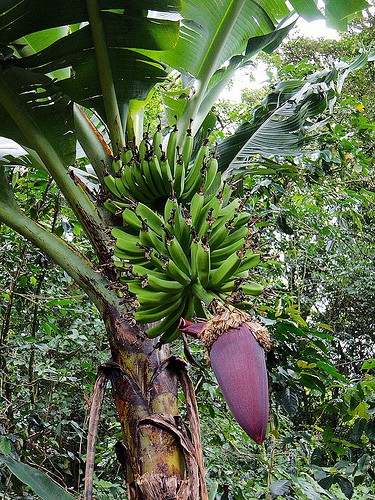 The female flowers grow further up the stalk, and its these that sometimes grow to become the yellow fruit we’re familiar with. The entire plant is tree-sized, although technically it’s not a tree. 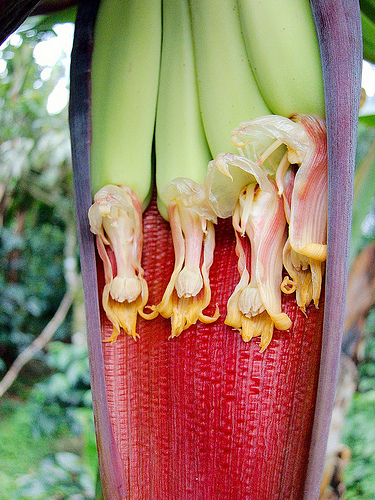 The bananas help to fix nitrogen, and their leaves, flowers and unpicked fruit become mulch for the coffee plants. Marco picked us some bananas. They were smaller than typical supermarket bananas, but delicious. The farm also had mangos, sugar cane, potatoes, and assorted vegetables whose names were unfamiliar to me. 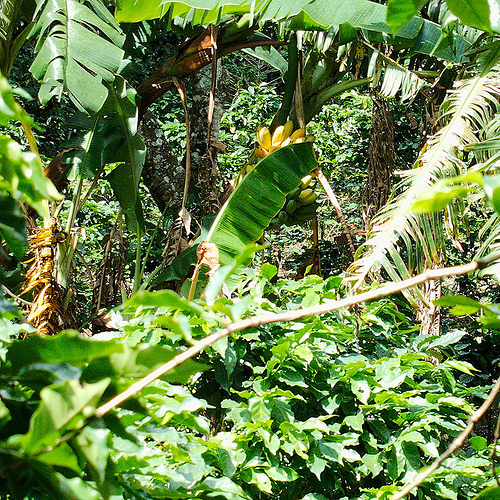 While a big industrial coffee farm will harvest and process all the coffee cherries at once, smaller farms have been finding that it’s to their advantage to harvest just the ripest cherries, and have several smaller harvests. Not only does this spread out the work, it also leads to a higher quality of bean—a quality level that the larger commercial concerns can’t really match. 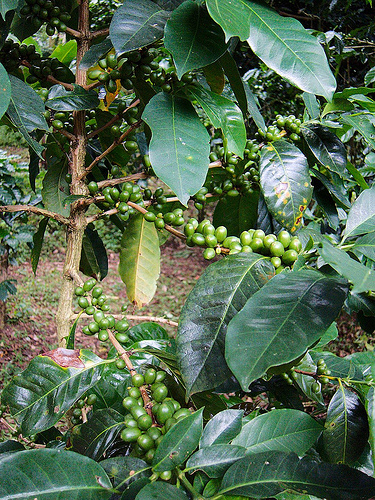 The farm had some manual coffee processing equipment. It also had a cane stripper for removing the bark from the sugar cane, and a pit for boiling the cane. 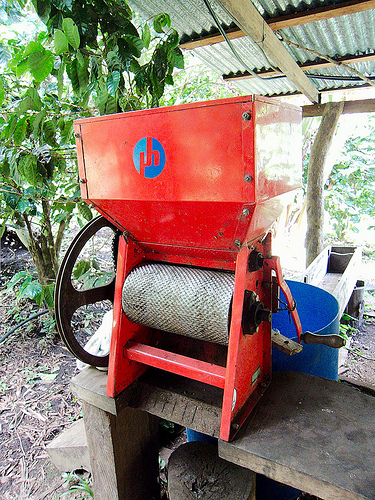 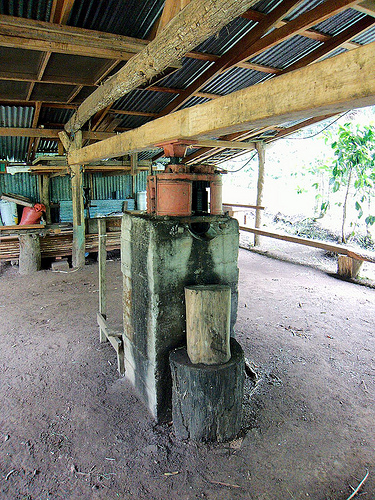 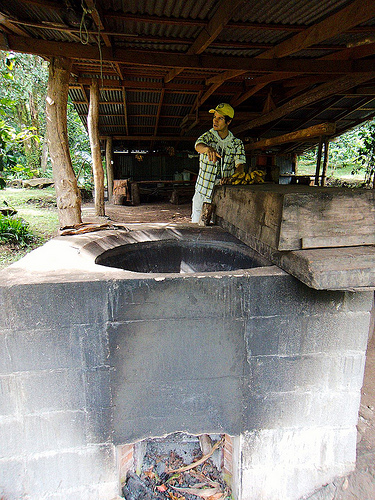 After boiling to concentrate the sugar, it would be poured into molds to crystallize into solid cones. (You can buy sugar cones, known as panela, at Mexican supermarkets in Texas.) 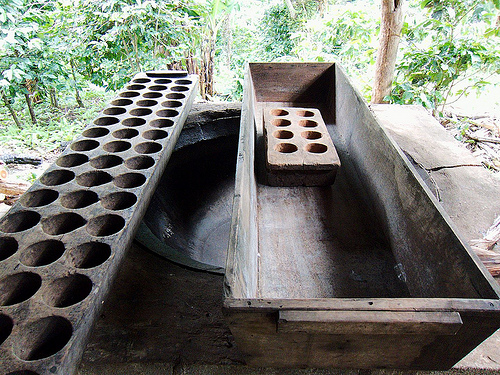 One piece of equipment Marco’s family don’t have is a coffee roaster, so next we went to visit Café San Luis, where we met the owner, Victor. He showed us around his farm, while flocks of green parakeets feasted on figs in the trees overhead. Victor handles everything from planting the coffee, through rinsing and preparing the beans, to the final roast. He even built his coffee roaster himself, based on measurements he made of a commercial roasting machine. Obviously we bought some coffee to take home with us. 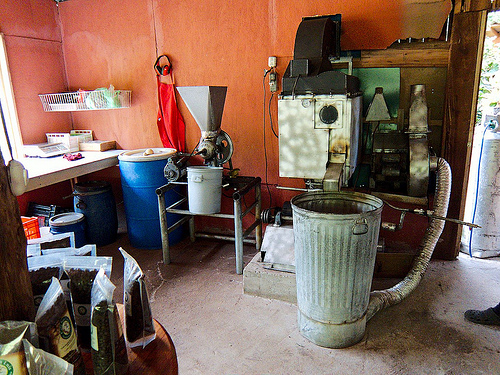 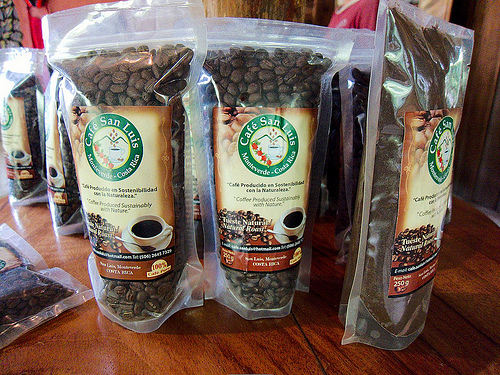 Back in Santa Elena, we found a room at a La Pension Santa Elena, and it’s here that we encountered the worst crime we experienced during our trip to Costa Rica: some truly criminally bad drunken singing from a group of French tourists. The guy with the guitar was so embarrassed that he stopped playing, at which point the most enthusiastic singer decided he would accompany himself on percussion by banging anything around that would make a noise. Once his friends finally got him to shut up, a good half hour later, we got some sleep.

I really feel lucky to have had the chance to see the entire process of coffee production, up close and personal. Earlier today I brewed some of the coffee, and it’s somehow a more meaningful experience to drink coffee when you know exactly where it’s from and how it got to your mug. 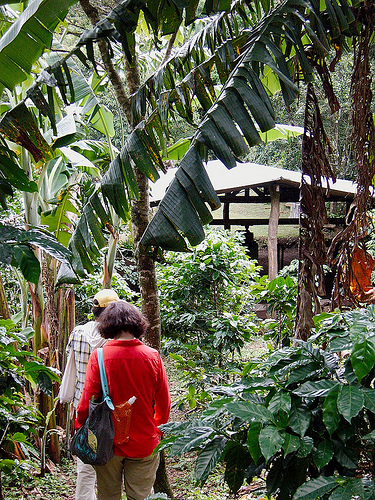