In 1981 I was watching the BBC TV show “Tomorrow’s World” when the CD player was first introduced to the UK. The presenter demonstrated the system, and showed how dirt and dust would simply rinse off the disc and it would still be completely playable. He talked about how the disc was read by a laser and would never wear out. I later read more about the system in hi-fi magazines. Allegedly it had exceptionally low noise, a wide frequency response, and amazing dynamic range.

In 1983, CD players hit the European consumer market. I heard that there was one store in London that had them — Covent Garden Records, on Charing Cross Road, who later became one of the world’s first all-CD stores. I got the train up there to see if they would let me listen to a CD or two.

It turned out that they had a couple of dozen CDs to pick from — that is, pretty much every CD available at the time. I picked out the one that I was actually familiar with — “Exit” by Tangerine Dream. I listened to “Choronzon“. When the synth sweep and heavy bass percussion came in after 2 minutes, I was sold. I went home and started saving my money.

If you don’t remember what it was like before digital audio, let me explain. You would generally buy albums on vinyl LP, in which the sound waves are encoded into a long spiral groove scratched on the side of a circular piece of plastic. You play the LP by spinning it at a fixed speed, and using a tiny piece of diamond mounted on the end of a tonearm to trace the scratch and wobble according to the waves of sound encoded into the walls of the groove. The record player then decodes the wobbles back into music.

The first problem with this system is that the left and right channels are encoded into the left and right walls of the groove, at right angles. If your tonearm isn’t balanced just right, you end up with sideways pressure, leading to one channel being louder or distorted compared to the other.

The second problem is that low frequency wobbles are traced a lot more easily than high frequency ones. So to get anything like the original sound back out, the people pressing records had to boost the high frequencies and cut the low, a process called pre-emphasis. This would then be reversed by the record player, via the RIAA equalization curve. But different batches of vinyl plastic would have different physical properties, so in practice different pressings of an album could sound quite different.

Then there was record warp. If you didn’t store your records properly, the soft plastic would bend, particularly if it was kept somewhere warm. Often records would be somewhat warped when you bought them. The warp was often audible. Sometimes records would even skip. You could adjust the tonearm to track more heavily against the record, which reduced tracking problems, but that led to another problem. As I mentioned, the vinyl plastic is soft; and the stylus or needle which plays the groove is made of diamond, which is known for its hardness. So all vinyl LPs degraded a little every time you played them, and the more you turned up the tracking weight the faster you ruined your records.

Then there was dust. The tiniest dust motes in the grooves of a record would result in audible random clicks and pops. It was also very easy to scratch the soft plastic, generally resulting in repetitive clicking.

It was also possible for cheap turntables to run fast or slow. My Sony PS-LX33 had an interesting way to avoid that: on the inside of the underneath of the turntable was a magnetic strip. As the turntable rotated, the strip moved past a tape read head, which resulted in pulses that were used to measure the speed of rotation and adjust the motor speed to correct for any inaccuracy.

So basically, you had albums which were 30cm across. You had to store them vertically, or they got ruined. Each time you played them, it was best to spend a minute or two cleaning them with special cloths or lint rollers. If you dropped them, they were often ruined. Sometimes they skipped when you got them brand new from the shop, and you had to take them back and swap them for another one. And after ten or so plays, you could hear that they were wearing out.

Alternatively, there were audio cassettes. They had even worse sound quality than LPs, but they were a lot harder to ruin, so long as you remembered to clean the metal head and rubber rollers inside the cassette deck with a cotton bud every month or two, and run a special demagnetizer over the heads every year or two.

So I tended to tape a copy of my favorite records on my Sony TC-FX2, listen to the tape until it wore out, and then make another copy. The actual record was stored safely away from dust and scratches, generally taken out from the shelves only in order to admire the cover art.

So yeah, I hated the finicky nature of LPs with every fiber of my being, and was eager to switch to CD. I saved every penny I could from working part time jobs and running errands, and I eventually got a Philips CD104:

After a while it developed a fault, and Covent Garden Records were nice enough to swap it for a replacement, which happened to be a newer revision, the CD104B: 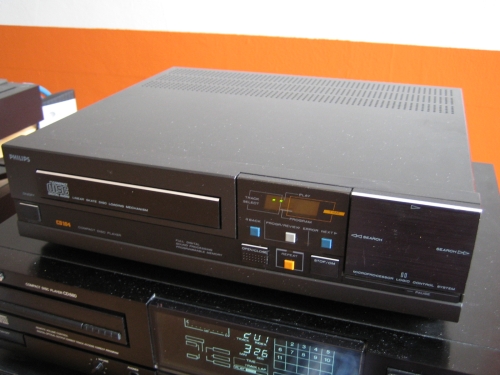 The 104B had improved audio circuitry. This was a revelation — all my CDs suddenly sounded better. This was quite different from the situation with LPs, where playing them on poor equipment generally damaged them, and upgrading equipment would often leave you wanting to go buy another copy of your favorite album.

By the time I got my third CD player, a Denon DCD-960, technology had advanced again. Now, the player would fit a quadratic curve to the data points on the CD, then render that at higher resolution. The sound quality improvement was stunning. I spent several weeks just going back and listening to my favorite albums again, hearing new details for the first time. This was something a lot of people didn’t understand about CD: a lot of the early players, especially the cheaper ones, produced much crappier music than the format allowed for. Yes, early CD players had many sound quality issues that weren’t problems with audiophile turntables — but as time went on, those problems were overcome.

CD also took some getting used to from a listening standpoint. Whereas with tape and LP you had hiss and other noise to subconsciously cue you in to how loudly you were listening to the music, with CD it was all too easy to fail to realize how loud it was until you realized your head was hurting.

Now we have MP3, AAC and other digital audio formats. Sometimes I find myself resenting when an album is only sold in MP3 or AAC. I want lossless, I tell myself. Then I try to force myself to remember what LPs were like. The me from 1982 would have killed for the sound quality of 256kbps MP3s. Yes, it’s pretty amazing having your music collection in your pocket, but that’s nothing compared to the leap from analog to digital.