Let me start out by saying that I’m not even going to talk about the fancy things modern phones do, like browse the web and recognize voice commands. I’m just going to talk about how amazing it is that you can wander anywhere in the industrialized world, someone can call your phone number, and somehow that call will find you wherever you happen to be, via a phone that can be as small as a packet of cigarettes.

When I traveled up to London searching for obscure records, I was expected to call my parents to let them know that I hadn’t been stabbed to death in a riot or blown up by an IRA bomb. To do this, I’d have to find a public telephone and feed it coins. Sometimes I was faced with the difficult choice between getting on the next train home, or making that phone call and possibly missing the train. As a parent, you had no way to contact your children unless they were at someone’s home.

I understand that at American universities, it was quite common for students to have a phone in their rooms. Well, when I went to college, my college had a phone. One phone. Or at least, one phone for undergraduates. I think they later splashed out on a second one, but I’m not certain, my memories are somewhat hazy. Anyway, when I wanted to call my parents, I went to the building with the telephone in, and queued up to use it.

Nowadays, of course, parents give their children mobile phones. They can contact them anywhere, any time. They probably check their locations with Google Latitude too.

When I was a child, telephones looked like this: 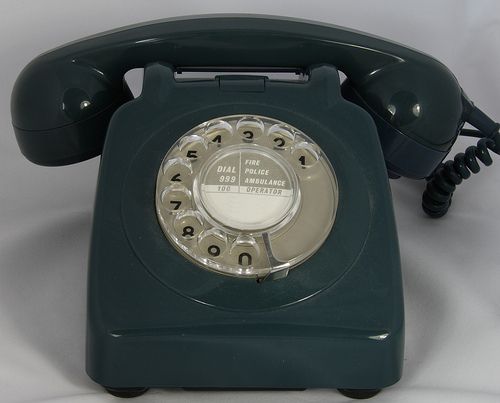 They were attached to the wall via a length of cord. You had to be quite strong and dextrous to operate the dial, and often had to hold the phone with the other hand to stop it slipping around. In the middle of our village was the local telephone exchange, a small brick building filled with metal rotor arms attached to motors. As the dial turned on our telephone, the electrical pulses it made would make those metal arms move to connect the call.

It really was a different world before mobile phones. For example, if you wanted to meet someone and go out for a meal, you had to arrange the time and location in advance. If the train was late or you got stuck in traffic, well, you just had to hope that they would wait for you, for as long as necessary. More than once I had to wait for over an hour for someone, with no real idea whether they were delayed or had maybe just forgotten the whole thing.

Traveling in a foreign country was scary. You’d need special numbers to call back home, different coins, and so on. You’d have no real idea where public telephones were located, unless you had a tourist map that showed them.

Now, you can use the same number everywhere, and the phone handles everything. You can even use your own phone, most places. If you’re late, you can call. You can literally be in a jungle and still be able to call your mother and tell her you haven’t got dengue fever and haven’t been eaten by a cougar. But the real change, to my mind, is to the ability to throw together a social meeting with little or no notice, and deal with the unexpected.