My dad was very into photography. He had several SLRs, and even a Mamiya 645 medium format camera for a while. Inevitably I got interested in cameras too, and before long I had one of these: 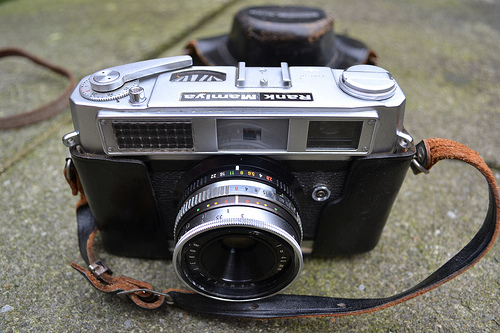 Here I am using it: 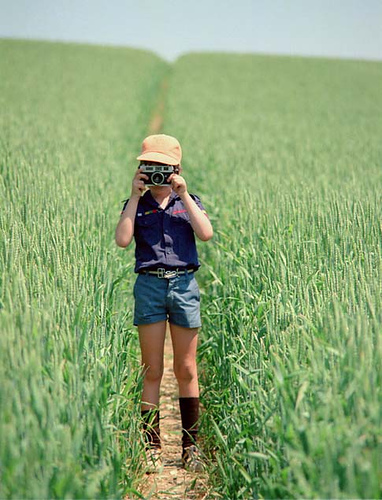 The big problem with film cameras, from the point of view of learning to take photos, is that it can be weeks between taking the photo and seeing how it turned out. You can ameliorate the problem a bit by taking lots and lots of photos, but that gets expensive quickly. That’s the trick professional photographers generally used, though — they would blow through multiple rolls of film in a single assignment, and pick out a few good shots from the fifty or more they took.

In the 90s, I got a Polaroid camera. That gives you the chance to see the pictures almost instantly, but it costs even more per shot, you can’t easily get duplicates or enlargements, and the integral prints are prone to failure when the processing gel doesn’t quite get squeezed evenly to the edges of the image.

Then around 1997, I encountered my first digital camera: The Apple QuickTake 100. 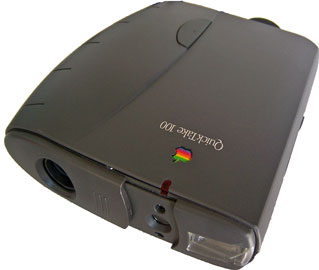 Built by Kodak, it had a resolution of 640×480. There was no way to view the photos on the camera, you had to download them to a Mac for that. We used it at work to try and assemble pictures of employees for the company directory.

In spite of the poor image quality, this was as amazing a revelation as video cameras had been for me a couple of decades earlier. Suddenly I was free to take photos for free, and throw them away if I didn’t like them, losing nothing but a few seconds of my time.

In 2000, I got the original Canon PowerShot S100 Digital ELPH, also known as the Digital IXUS: 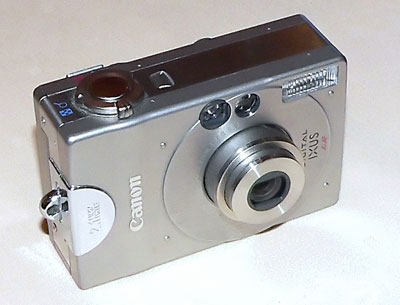 This was the first digital camera as we know it today: small enough to fit in a pocket, with a usable 2 megapixel resolution and a zoom lens. It came with an 8MB CompactFlash card. Yes, 8 megabytes, not gigabytes.

Oddly enough, my latest camera is also a Canon PowerShot S100, because Canon seem to reuse old model numbers. The new S100 has 12 megapixels, an amazingly sharp f/2.0 zoom lens, a sensor that can take pictures indoors with no flash, and a built-in GPS. And when I don’t have that with me, I can make do with my phone’s camera, which while so-so in quality still blows away what the ELPH could do.

So I was an early adopter. I knew digital photography would be important. I knew it would inevitably surpass analog film in image quality. What I didn’t realize was just how much it would change the way people communicate. It didn’t occur to me that people would routinely photograph their lunch, or that my parents would use their phones as miniature photo books to enjoy a new photo of the grandchildren delivered wirelessly every day or two. I started to grasp how big a deal it was in 2004, when we moved to Texas; I could just take photographs of neighborhoods and houses that interested us, and use the timestamps to cross-reference with my notes. (Now, of course, I’d use a GPS trail.) Shopping for furniture, I’d take photos of possible sofas and dining tables to consider later, along with snapshots of the price tags.

In just a few short years, photography has changed from something people do as a hobby or on special occasions, to a ubiquitous means by which we communicate with each other. We now live in a world where few plates of sushi go unphotographed. I often browse the web for historical photos, and think about how different the study of history will be for people in the future. Obviously not everything will survive, but still, imagine what will be possible with computers 100 years from now, mining millions of photos to let you go back and see the distant past in color, and wander around it in 3D.