My first watch was a Timex. It looked like this: 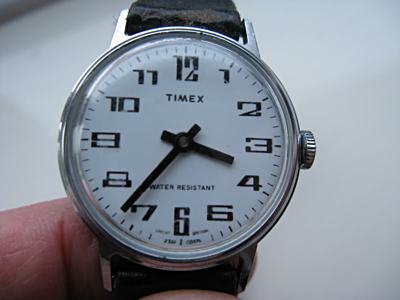 It was crap, to be honest. If I remembered to wind it and set it in the morning when I got up, it would generally be no more than a minute or two wrong by the end of the day.

In a quartz clock, electrical current is applied to a crystal of quartz. This makes it resonate at a precise frequency, typically 32768Hz. A circuit counts the pulses, dividing by powers of two to end up with a once-per-second pulse. Following the development of integrated circuits, someone had worked out how to pack all the necessary electronics into something that would fit on your wrist. In addition, light-emitting diodes (LEDs) had been invented, so when I got my first quartz watch, it looked like this: 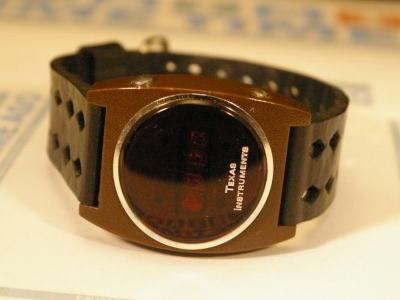 As you can see, it was made by Texas Instruments. For a brief time I was the coolest kid on the playground, everyone wanted to check out the glowing numbers in that chic brown plastic casing.

In the Hitchhiker’s Guide to the Galaxy, Douglas Adams wrote:

Far out in the uncharted backwaters of the unfashionable end of the Western Spiral arm of the Galaxy lies a small unregarded yellow sun. Orbiting this at a distance of roughly ninety-eight million miles is an utterly insignificant little blue-green planet whose ape-descended life forms are so amazingly primitive that they still think digital watches are a pretty neat idea.

When he wrote that in 1979, digital watches really were a pretty neat idea. However, that nice man Mr Casio made them affordable for everyone, and began cramming them with geeky features, and by the end of the 80s they were falling out of fashion. Nowadays many people don’t bother with wristwatches at all, but that doesn’t mean the quartz crystal mechanisms have gone away. Rather, they have become a standard feature of every home computer, television, mobile phone, and car dashboard. The real-time clock that your computer uses to display the time on your screen is powered by a quartz crystal. Your phone may get the time periodically from the network, but mostly it relies on a quartz clock circuit to keep time.

The idea of a clock or watch drifting by a minute or more over the course of a day is laughable now; a brand name quartz watch will typically drift by less than a tenth of a second per day. Because I suffer from a combination of occasional klutziness and a geeky obsession with time, I still wear a quartz-powered digital watch. It looks like this: 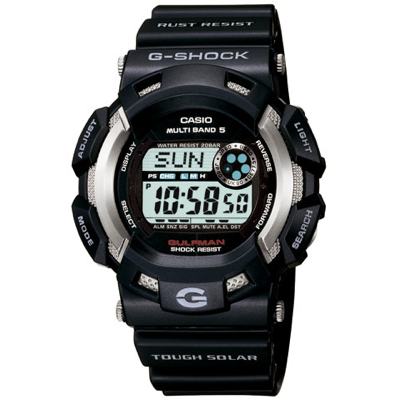 Each night it synchronizes via radio to the atomic clock run by NIST in Colorado, so it should always be within a tenth of a second of the correct time. And whereas my first quartz watch needed new batteries every few months, this one recharges itself using solar power, and will quite likely keep going for longer than I will.

If you look around right now, you can probably see something that will tell you the time, precise to within a few seconds. You probably don’t have to go to any special effort to maintain that timekeeping device to reasonable accuracy. You can thank the quartz crystal for that.