Naughty Dog have always had the best game engine technology on the PlayStation. Back in the PS1 days, Crash Bandicoot used algorithmic textures to get around the console’s lack of texture memory, true 3D levels so big that they took hours to compile on the development systems, and a Lisp-based game engine. On the PlayStation 2, Jak and Daxter kept the use of Lisp, and was the first game to have one huge free-roaming world with no loading screens.

Unfortunately, having the best technology didn’t always translate into making the best games. Insomniac used Naughty Dog’s platform to build the Ratchet and Clank games, which I found far more entertaining than Jak & Daxter; and Jak 2 was a horrible, horrible game. Infinitely spawning enemies? Missions with arbitrary time limits that require navigating through randomly generated traffic jams? Whoever came up with those ideas needs a slap. The third game in the trilogy was excellent, but I honestly felt it should have shipped with an apology for Jak 2. 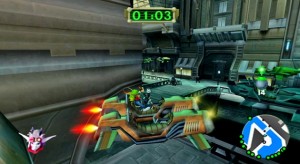 With the PlayStation 3, Naughty Dog’s first game on the new platform was Uncharted: Drake’s Fortune. It again showed them to be at the forefront technologically. Just as Jak had eliminated the loading screens, Uncharted now tried to get rid of most of the cutscenes too, as well as almost all of the HUD. Characters now interacted with each other and conversed during the actual gameplay. Character animation was state of the art, and the environment had lush foliage that reacted to movement and real-time shadows. But again, the game was somewhat lacking—it was widely criticized for being short and heavy on gunfire, and the plot also left a lot to be desired.

Everything changed with Uncharted 2: Among Thieves (henceforth U2). The focus on shooting was dialed back somewhat, with protagonist Nathan Drake more interested in stealth and taking cover. The action was continuous, with some truly amazing set pieces involving combat in a collapsing building, and the first truly convincing video game take on the classic “fight on a moving train” trope. For me, U2 was probably the best PS3 game, beating even GTA IV for its wider variety of settings and higher enjoyability.

So when Uncharted 3: Drake’s Deception was announced, I was excited. I thought Naughty Dog had cracked the formula, and would deliver another blockbuster. But after playing through U3 this week, I was left feeling rather disappointed. I immediately went back and played through U2 again, to see if I was misremembering something—but no, the second game really is better. And the frustrating thing is, the failures in Uncharted 3 are things which I think it would have been relatively easy to fix if they had been recognized.

First up, the graphics. More polygons means better graphics, right? Well, not so much. To my eye, the hyperreal detail of Uncharted 3 pulls it into uncanny valley. It was a relief to go back to the slightly softer Uncharted 2 Drake, and not be distracted by the facial animation the whole time. (That said, I did notice how much better the characters’ ears were in U3, and a couple of U2 characters are mysteriously fuzzy, in particular Harry Flynn.)

The world of Uncharted 3 also looks more detailed. Unfortunately, this had the side effect of making it harder to spot where I was supposed to go next. Levers, switches, pressure plates and treasures stand out much better when the rest of the world is slightly less detailed. At one point I even spent about 15 minutes flailing around trying to find a door that was too well hidden by the exquisite detailing of the surrounding rock walls and the ambient lighting.

There’s also less environmental variation in U3. In U2, you traverse jungles, cities, snow-covered mountains, and icy crevasses. In U3, other than a brief jaunt through London the game mostly takes place on ships or in deserts. In Uncharted 2, when the final location is revealed it is breathtakingly beautiful—huge and lush, even if you only get to explore a small part of it. In U3, the final location seems dull and lifeless, not to mention small. Part of the problem is that everything is lit in sandstorm red, but there’s also the nagging sense of having seen it all before in Prince of Persia.

The sameness of the graphics also makes the game’s pacing problems seem worse. I appreciate that Naughty Dog spent a lot of time coming up with algorithms to let Nathan Drake stagger realistically across lifelike sand dunes, but someone really needed to come up with some tasks for him to perform in the desert, rather than subjecting us to a rather tedious interlude of holding down the control stick. More villages to explore for clues? A Bedouin camp? Wreckage of another expedition? The “sand dunes, dried-up well, sand dunes, mirage, sand dunes, oh no I’ve been walking in circles” sequence is such a predictable string of clichés it would probably have been better to condense it into a montage cut scene and skip straight to the next bit of actual game.

If the desert sequence is boring, the drug sequences are worse. Drug trips are never interesting for anyone other than the person actually taking part in them, and that applies to Nathan Drake’s wobbly blurry slow motion staggering around a marketplace as well. I found myself wondering if I had missed something, as I couldn’t believe I was expected to blunder around aimlessly for over three minutes.

In fairness, there are a couple of excellent set pieces at sea. The boats are buffeted by procedurally generated ocean waves, rain lashes the decks, debris and unsecured cargo pallets slide around, and overall there’s a real sense of physical place, as long as you overlook the many mysteriously invulnerable locked doors. Unfortunately, Naughty Dog then throw in a ridiculously bulletproof and grenade-proof armor plated enemy with a machine gun, and suddenly a treacherous environment becomes a source of major frustration.

If the ridiculous shipboard ‘boss’ stretches credulity, the end sequence shatters it completely. Where is this infinite waterfall-like flow of sand coming from? Where is the entire city disappearing to? Objects don’t just vanish into sand like that, unless we’re expected to believe that the entire city was built on top of a giant hollow sinkhole. Also, why can’t I leap off of the sliding chunks of city and just wait in the desert until it’s all over? Again I found myself reminded of Prince of Persia, and not in a good way.

Another ludicrous sequence is the escape from a burning building. In the real world, burning buildings are filled with smoke, and you asphyxiate inside a minute or two. You don’t get to leap athletically between rooms that are mysteriously only burning around the edges. I don’t expect complete realism in my action games; I know that Drake regularly survives falls that would kill any real human. I’m prepared to overlook that for the sake of the action and gameplay. But there are limits to suspension of disbelief, and U3 exceeded mine.

Then there’s the plot. The flashback structure of Uncharted 2 worked so well that Naughty Dog decided to do the same thing in U3. Unfortunately, they also decided that they wanted to tell the story of how Nathan Drake met Victor Sullivan. This requires a 20 year flashback, and you get to play Drake as a weaponless teenager wandering around a small town, going to the museum, and looking at things. It’s about as exciting as it sounds. Stick with it and there’s a rooftop chase sequence at the end, and oh dear we’re doing Prince of Persia again aren’t we? 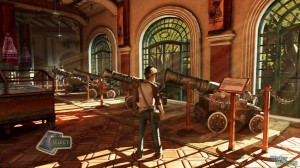 The 20 year flashback doesn’t work as plot either. Drake steals the McGuffin from under the nose of the master villain, she knows about it and about Drake’s involvement with Sullivan, and yet we’re supposed to believe that she just sits on her hands for 20 years before trying to recover the item? Meanwhile Drake, who has seen it trigger a piece of cryptographic hardware owned by his namesake Sir Francis Drake, is content to wait 20 years before investigating further? Really?

The final piece of processed cheese on this Subway sandwich of disappointment is the flat dialog. Uncharted 2 sparkled with witty banter between Drake and his companions. Maybe I’ve watched too many Bond movies, but I like my gun battles and tomb raiding to be enlivened by the occasional wisecrack or horndog innuendo. I liked that Drake was something of an everyman, commenting “You’ve got to be kidding me” when attacked by a helicopter. There were some genuinely funny bits of character crosstalk in Uncharted 2. Uncharted 3… not so much.

So while Uncharted 3 is definitely technically a better game than Uncharted 2, it ends up inferior, mostly because the earlier game had much better writing and game design. It’s disappointing, because writers and designers are cheap compared to 3D game engines and huge 3D models. I just hope that the forthcoming Naughty Dog game The Last of Us has been an exercise in writing and game design, and not technological development.

Finally, I feel obliged to point out that even a sub-par Naughty Dog game like “Uncharted 3” is head and shoulders above most other games, so don’t let my criticisms keep you from playing it. But if you only play one Uncharted game, play Uncharted 2.