We hadn’t been planning on a third budgie. However, Chester’s close call last year had me thinking about what we would do if he suddenly keeled over. I realized Lola would be left alone, and budgies really need to be part of a flock. The two of them are both over 5 years old now, so it seemed like a reasonable time to get a third bird. That way when one of them eventually departs, we’ll still be left with two.

So, we put our names down for a hand-raised budgie. They’re pretty rare, because they don’t fetch as much money as large parrots, so it’s not really a very profitable endeavor, more of a hobby for budgie enthusiasts. It took months of waiting, but at the start of July we were told a bird was available. She’s a greywing, a beautiful lemon-lime color with touches of darkness on the chest. We’re calling her Rita, short for Margarita. 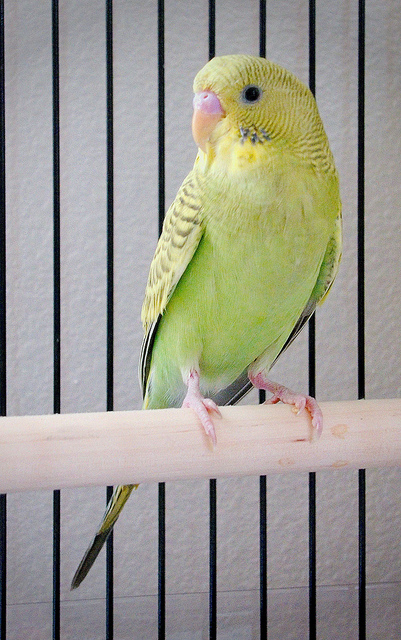 She’s currently upstairs in the quarantine cage. Since the other birds have never worked out the whole staircase thing, the upstairs spare room has made a good quarantine zone.

When we first got her home, she didn’t move or make a sound — until I started reading something aloud, and she suddenly began tweeting. I worked out that she was used to the noise of the pet store, and the silence of the house was freaking her out. So I bought the “Happy Budgies” album from Listening Earth, rigged up some speakers, and played it. It wasn’t long before she felt safe to move around the cage. She found the food and water, and started eating.

So I’d play morning budgie noises in the morning, evening ones in the evening, and loop the others during the rest of the day, along with some other nature recordings from the Australian outback. Over the next couple of days I gradually reduced the volume until she was settled in and used to the new environment and only hearing the occasional tweet or squawk from downstairs.

I work from home office; generally I come down in the morning, open up the cage downstairs, and let Chester and Lola come and go as they please all day. Sometimes they’ll have breakfast with me in the office; sometimes Lola likes to snuggle my neck in the afternoons.

Partly this is a philosophical thing — I don’t think it’s right to keep birds in cages their whole lives. There are other advantages, though. I try to persuade the birds to go back in the cage voluntarily when we want to go out somewhere, and I’ve only had to grab them from the main cage once or twice, for vet appointments. So they don’t view the cage as a place of captivity; instead, it’s the budgie house, a place they can go and feel safe and know that we won’t mess with them. They’ll often take an afternoon nap in the cage out of choice.

We’ve been trying to give Rita the same sort of freedom, and once she was settled in, we started spending time upstairs in the spare room with her, with the quarantine cage open. The door drops down to form a horizontal platform, which makes it easier for her to get in and out.

So, over the 4th of July long weekend we opened the cage door, then we sat back and read books and browsed the Internet. Rita was basically left to do her thing under our discreet supervision. After a while, she hopped out of the cage and looked around. Then she hopped back in, and looked around some more. Then out, and another scan of the surroundings. She kept doing this for the best part of a day, head often tilted sideways with a quizzical expression, like she was having trouble believing that she was suddenly free to decide whether to be in the cage or not.

After a while she tried some flying. She’s been gradually getting better at that, she’s not colliding with things any more and her landings are quite graceful now. She’s fully flighted — happily the pet store hadn’t clipped her wings, so when we introduce her to the rest of the flock they’ll all be able to fly around together.

Though she’s still nervous, she’s stepping up onto my hand, with less and less reluctance. The best so far has been a walk across the house on my finger. She’s incredibly gentle — not a single bite, not even a gentle one.

She’s extremely vocal and somewhat imitative, and her cere has changed color a couple of times, so we’re not entirely certain about the gender; if she turns out to be male, she’ll be renamed Rico Mojito.