In the summer of 2012, Chester budgie had a narrow escape. This August, as we prepared to go away for a week’s vacation, I noticed that his poop was abnormal. I wasn’t overly concerned, but I warned our pet sitter.

When we returned at the end of the month, Chester was clearly not doing well. Unlike the last time, he wasn’t throwing up, but he was sitting fluffed up and sleeping a lot. Weighing him revealed that he’d lost a lot of weight, from 42-44g down to 36g. We took him to the vet.

It was the same story as before. His (probably cancerous) growth was pushing on his intestines, and making it hard for him to digest food. He probably had some sort of infection too. We left with some Baytril, the antibiotic he had responded to the last time.

For the first few days, things looked a bit better. He perked up, spent half a day eating, and managed some fairly normal looking poop. However, by the end of the two weeks of Baytril, he was back into a slow decline.

We tried a different antibiotic. He rapidly got worse, so we switched back to the Baytril. The vet told us there wasn’t any hope of any sort of surgical intervention — there was no infected fluid to drain, no intestinal infection, just a big cancerous mass.

By September 20th Chester was clearly weaker. He wasn’t barfing or acting sick, but he was steadily losing weight, down to 32g. In the morning he would fly in to my office, gasp from the exertion for a while, and then immediately try to take a nap. When it was time to dose him with antibiotics mornings and evenings, he barely put up a fight. I realized I was now a budgie hospice nurse, facing the difficult decision of how long to let the situation go on for. It’s difficult with birds, because they do their best to hide when they are sick; they don’t want to show weakness, because that’s what makes predators target them in the wild. I didn’t want Chester to suffer, but I also didn’t want to end his life before it was necessary. He was still climbing the curtains and flying with the other birds, so I kept dosing him and hoping for a miracle.

By September 21th, I had the feeling we were about to have our last weekend together. As it turned out, he got dramatically worse overnight. On the 22nd he woke up and went straight to wandering the floor, wings drooped, looking for anything different that might be edible, because he had lost his appetite for regular food. Gently feeling his body, it felt like he was mostly tumor; the rest of him was almost skeletal. He had trouble flying back up to the windowsill, and ended up clinging to a curtain, panting. Needless to say, he didn’t join the others in races across the house any more, let alone instigate them.

Then I realized the biggest clue of all: He wasn’t singing any more. He had always been more vocal than Lola. Now he didn’t even tweet to the rest of the flock in the mornings. He had no joy any more.

We called the emergency vet. They said we could bring him in. We sat in a waiting room, and Chester sat quietly hunched over on my shoulder. I could hear a ragged crackling noise as he breathed; no wonder he couldn’t gain altitude any more. 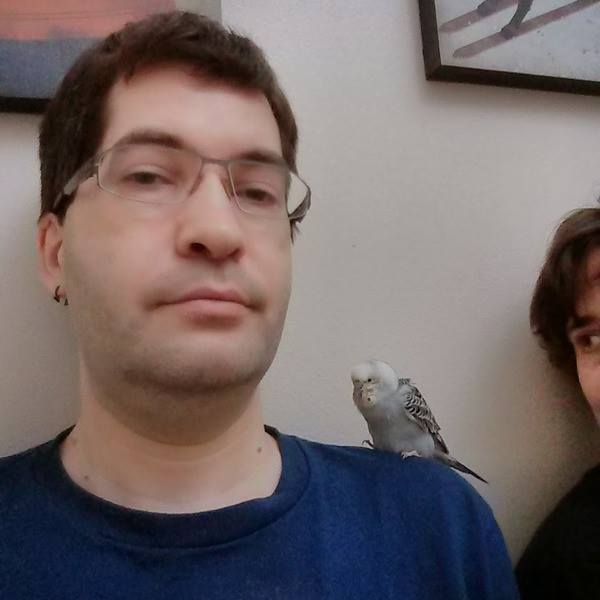 We buried him under my office window, beneath the spot where he used to enjoy sitting and watching the world and singing to me.

That night Lola came out to look for Chester. She sat at the back windows and looked down at the floor, in case he was foraging hopelessly there the way he had been on previous days. I took her back to the cage. When I covered it up to go upstairs, something else unusual happened: Lola and Rita started gently tweeting, to call Chester home if he was still out.

At least I have no guilt or regrets. Chester reached an average lifespan for a budgie in the wild. He never wanted for anything. He spent his days uncaged, with budgie flockmates. The vet even commented that she was surprised he’d lived for another year after his first treatment.

I’m very glad that we got Margarita this year. Having two other birds has made the whole process much more bearable.

It turned out that Chester was solely responsible for throwing about half of the expensive organic budgie food on the floor. Still, if I could bring him back, I would.