As usual, I went to the free SXSW Interactive Gaming Expo this year, and here’s my report. I should warn up front that (a) I don’t really play FPS games except for Team Fortress 2, and (b) I don’t do Microsoft, so if you’re a hardcore Windows gamer, this is probably not the report you are looking for.

Nintendo had teamed up with the Video Game Museum for a small exhibit on the history of (mostly Nintendo) video games. They had Goldeneye 64 running, which necessitated a quick message to Martin Hollis to remind him that he’s famous. 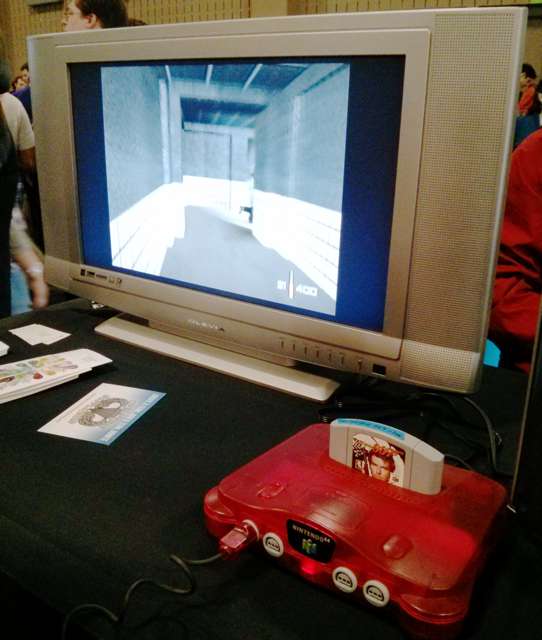 They also had a working Vectrex. I’d never actually seen one in action before. I’ve often kicked myself for not picking one up when I saw them being closed out for £99 in Woolworths. 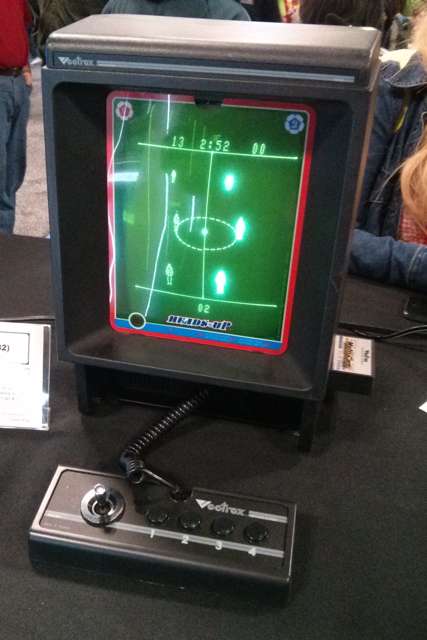 Nintendo were launching Mario Kart 7 for WiiU, but I’ve never been a big Mario Kart fan and I’m steering clear of the WiiU for now. Microsoft were there showing the Xbone, which I ignored because Microsoft. Sony were wholly absent, I guess because being #1 means not having to try and sell your new console at every opportunity. 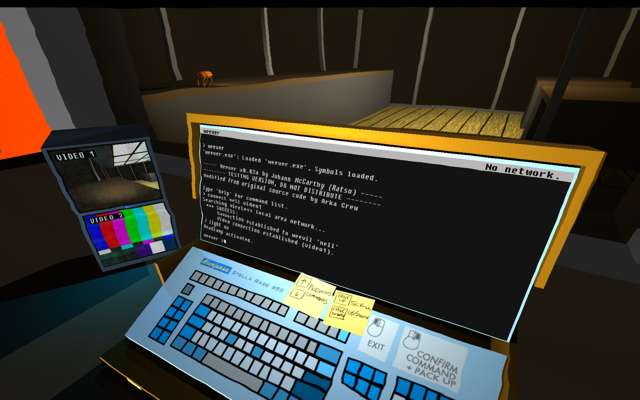 My favorite wacky game idea of the expo was Classroom Aquatic. You are in a school of dolphins, and you’re suddenly faced with a test that you totally failed to study for. You have to try and sneak looks over at the other dolphins in the school, so you can cheat and copy their answers. It was being played with Oculus Rift headsets; I’m not sure how well it’ll translate to conventional displays, but I do love the idea. 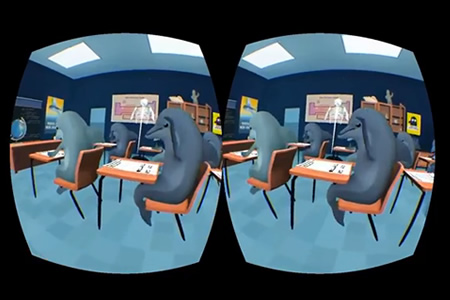 Oculus headsets were clearly the in thing; I’d estimate that about a quarter of the games companies were showing off 3D support. I’m really skeptical of the headset idea, and frankly didn’t fancy standing in line to try one. Maybe if they catch on, in the way that 3D TVs totally failed to?

Disappointingly, I saw no Steam boxes. I’m an anything-but-Microsoft-or-iOS gamer, and I would really like to see a more open console carve out a niche in the market. I’d also like to play more of the indie games that don’t make it to PlayStation, as weird games are very much my thing. So, I’m interested in the Steam box hardware, if it ever becomes a real thing in stores.

Speaking of weird games, another one I saw was Type:Rider, which is based on the fantastically geeky concept of adventuring through the history of typography. As far as I can tell you play as a colon — in the typographical sense, as this is rated E for everyone. Gameplay involves reading samples of ancient manuscripts and adventuring through their letterforms, solving puzzles using your knowledge of fonts. 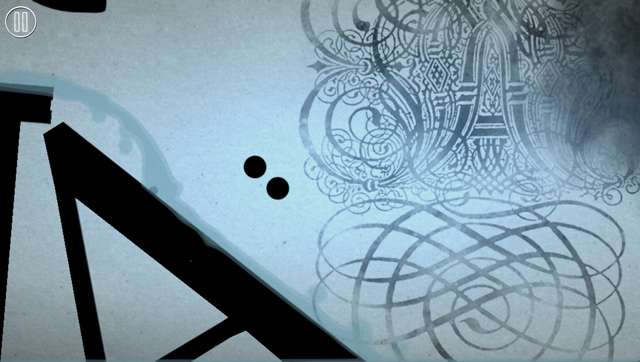 KAMI is a beautiful minimalist game based around the concept of unfolding paper squares. Pick a color and touch a square, and it flips over to the color you chose — and then adjacent squares of the same color flip over, and so on, flood-filling with color. The puzzle aspect is that you have to try and turn all the squares one color with only a certain number of taps. 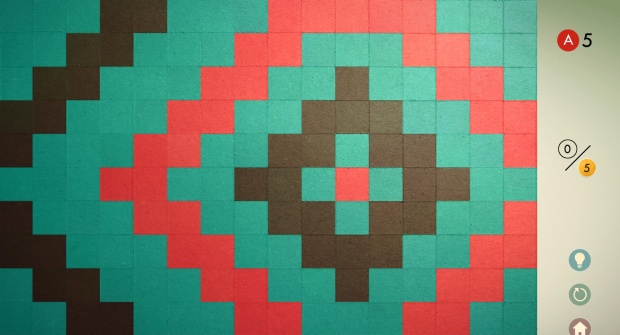 Hardware wise, Cooler Master were showing their brand new Novatouch TLK keyboard. It’s a keyboard with Topre electrostatic capacitive keyswitches, but the switch stems are compatible with Cherry MX tops, and it’s rumored that it’ll be under $200. If you’re not a keyboard conoisseur, trust me when I say that that’s a big deal. If coolness is more important to you, CM were also showing the Quickfire Rapid i. It’s Cherry MX switched, and has individually addressable LED backlights for each key. As you type, keys you push light up and then slowly fade to black. Totally superfluous but looks really cool. Both are tenkeyless, which is how I like my keyboards. No idea about Linux and Mac compatibility yet, so I won’t be rushing out and buying, but I was planning to get a new keyboard this year so I might wait and see. I’ve not read up much on Topre switches, as until recently they’ve been prohibitively expensive.

There were non-computer games at the expo too. The inventor of Fluxx was there with his new not-quite-released-yet card game based on fast-paced matching. Steve Jackson Games were there too, with the amazingly large Ogre: Designer’s Edition, and Mayfair Games were introducing people to the world of Settlers of Catan. Oh, and lots of people were playing Magic: The Gathering, but I’ve always viewed that as a D&D substitute for munchkin rules lawyers.

…and then I took my ten 3DS streetpass tags and went home.