So, Vibram have settled a class-action lawsuit accusing them of making health claims that weren’t scientifically justified.

Deadspin had a snotty post which linked to a scientific study which summarizes the situation quite nicely:

While performance benefits may exist, injury may also occur from the added stress of running without the benefit of cushioning under the foot. […]

Conclusion: Runners interested in transitioning to minimalist running shoes, such as Vibram FiveFingers should transition very slowly and gradually in order to avoid potential stress injury in the foot.

I have a pair of Vibram FiveFingers. Not because I run, but because I happen to like walking barefoot. I’ve always taken my shoes off after getting to work, though in deference to the sensibilities of co-workers I kept my feet hidden in socks. Now that I work from home office, I’m barefoot all day.

With FiveFingers, I can get as close as possible to being barefoot outside, without the risk of burning my feet on the hot pavement during Texas summers. My Vibrams are the ones called “Sprint”, chosen because they’re the lightest and most minimal that have a strap. The “Classic” is even more minimal, but relies on gripping the heel to stay on, which I find less comfortable.

Yes, you need to get used to FiveFingers slowly. You need to walk (and run) differently. I don’t recall Vibram ever suggesting otherwise. I’ve no idea if being barefoot is better for my health, I just like it. 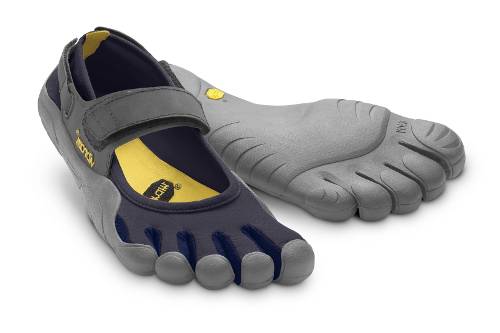 I don’t really understand the people who complain that FiveFingers are ugly. The top selling sports shoes last year were Nike’s LeBron James range, and a look at those reveals endless garish color combinations. The page of top selling athletic shoes at Amazon is a horror show of neon. Compared to those, my dull grey FiveFingers shoes are a masterpiece of understatement. The only explanation I can think of is that some people really hate to be reminded of the reality that feet have toes.

There are minimalist shoes without the individual toes, like those from Vivo Barefoot, but I like having unconstrained toes. In particular, I find FiveFingers great for driving; my toes can curl around the pedals and keep stiffness at bay for longer. Maybe I have slightly more than the usual 95% chimp DNA.

I suspect that this is one of those cases where the company decides it’s cheaper and less risky to settle the lawsuit than to fight it.