The first working solid state solar cell was developed in 1883 by Charles Fritts. Just 1% of the solar energy hitting the cell would be converted to electricity, and the cell was made from selenium with a thin layer of gold, making it far too expensive. It wasn’t until the development of silicon semiconductor junctions in the 1950s that solar cells started to become economically practical. Bell Labs developed a silicon-based solar cell with about 6% efficiency in 1954.

Meanwhile, the space race meant that there was a great need for a way to generate electrical power for orbiting spacecraft. While solar cells remained expensive for their power output, they were a lot less expensive than shipping fuel up into orbit or launching replacement satellites. So when the Telstar satellite was launched in 1962, it was covered with solar cells which produced 14 watts of electrical power, enabling it to relay the first live transatlantic TV pictures.

NASA’s Ranger and Surveyor probes were powered by panels of solar cells, and when Apollo 11 landed on the moon it took with it a package of scientific experiments powered by a solar panel. By the 1970s, the Skylab space station was in the news, as two of its six solar power arrays failed during launch. (Eventually one was repaired.) 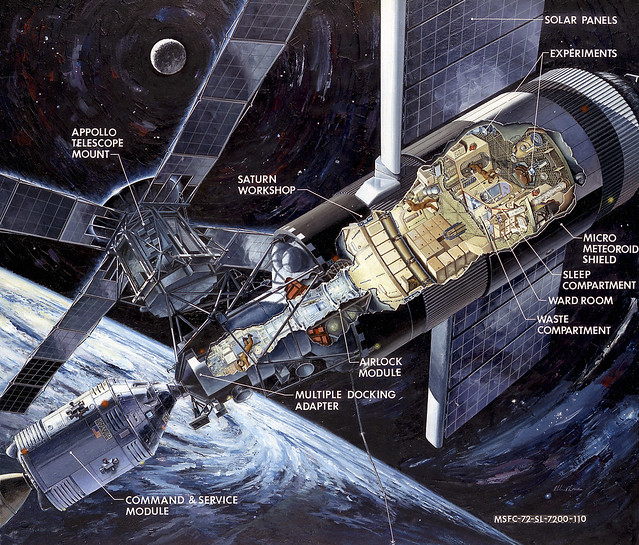 So growing up as a geeky kid obsessed with space and science, I obviously found solar power pretty awesome too. It was part of the glorious sci fi future that awaited us all, and by the time we were living on space stations (around the year 2000, no doubt), we would probably be relying on solar panels for most of our electricity. (Of course, most of our energy comes from the sun anyway — the energy in coal and oil came from the sun too, it just ended up in intermediate forms like giant ferns and Diplodocuses on its way to being squashed into black stuff.)

I had a Radio Shack electronics set growing up, and without a doubt the most amazing part of it was the solar cell it came with. There was something magical about watching a tiny sliver of silicon make electricity out of nothing more than daylight. Later on at school I had a solar powered calculator, and even today I have a solar powered watch.

So yes, I was pretty strongly predisposed in favor of solar power. But I didn’t go as far as powering my house with it until this year.

I first started thinking seriously about solar power after we moved to Texas. In Massachusetts, keeping warm in winter had been the big problem; the average gas bill for winter there is $1,100, and people unlucky enough to burn oil for their heat can end up paying twice that. In Texas, the situation is reversed — winter is cheap, but the summer air conditioning bill can be painful. Though not, granted, as painful as doing without air conditioning — believe it or not, some people choose to live through 40°C summers with no AC.

If you live somewhere cold, you should be aware that it’s possible to get heat from solar power. In fact, solar is a great way to get hot water — all you need to do is build a panel of tubes to pass the water through, paint them matt black to absorb as much heat as possible, and arrange some kind of pump to circulate the water through the panel and back to your hot water tank. There are commercial systems you can buy for under $1,000, and projects online showing how to make your own. If you have a swimming pool, it’s definitely worth looking into solar heating. 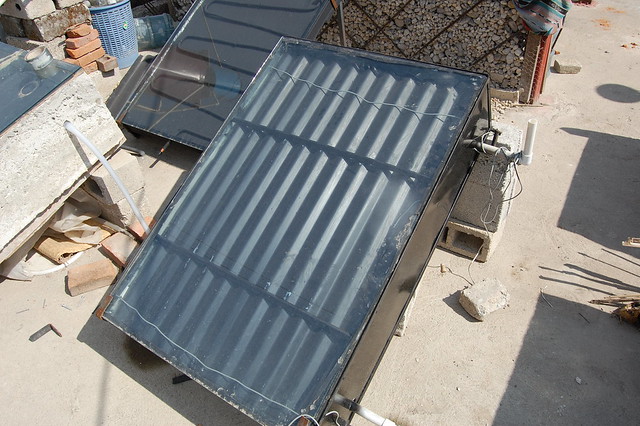 For us, though, the largest chunk of our utility bills went on electricity. Most of it was powering the air conditioning on hot days. And conveniently, hot days tend to be ones when the sun shines brightly.

What about days when the sun doesn’t shine brightly enough? What about hot summer nights? And what about if we need more electricity than solar can deliver?

There are several options. The first few are the ones favored by homesteaders out in the wilds far from the city: either have a big battery pack, or a generator, or both. We’re right in the middle of the city, though, so for us a much better option is to be grid-tied.

Imagine it like this: at night, you run the air conditioner on grid electricity; then during the day in the hours when the AC isn’t running, you generate excess solar electricity which you feed back to the electric company to replace the electricity you “borrowed” overnight. Net metering is controversial with many utility companies, who argue that it unfairly pushes the costs of maintaining the grid onto customers who don’t have solar. Of course, electric bills usually come with a line item charge for the connection, so the logical step would seem to me to be to adjust that line item to better reflect the actual costs it’s supposed to cover. Instead the Koch Brothers, via their anti-clean energy group the “American Legislative Exchange Council” (ALEC), have been spending a lot of money to get laws passed to discourage solar power and protect utility company profits. In Oklahoma, for example, you can now be charged more for your electrical connection as punishment for having solar or wind power.

The argument utilities present is that customers with solar need some sort of more expensive grid connection. Well, if there are actually any changes required to the grid to support feeding back excess solar power, I didn’t see them being made. We still have the same cable coming to our house. We did get a new electrical meter, but that’s a one-time cost, right? It seems to me that what’s really bothering the utilities is that solar power threatens to reduce the demand for their product. As profit-making companies, they are naturally expected to show growth every year, and that’s going to be hard to do once solar gets even cheaper. In Germany, uptake of solar power has destroyed the profitability of coal and gas power plants, and the Koch brothers are concerned that the same could happen here. Particularly worrying for them is the development of microgrids, where companies get together and set up their own small-scale grids to trade electricity, instead of needing to buy from a utility. Consumer microgrids are expected to start appearing in the next few years; Dean Kamen, inventor of the Segway, is working on a portable Stirling Engine power generator for powering microgrids.

So this is where it becomes relevant that Austin is unusual compared to the rest of Texas. Whereas most of Texas has deregulated electricity provided by private corporations, Austin and San Antonio kept their publicly-owned municipal power companies. The first obvious result of this has been that Austin has cheaper and more reliable electricity than Dallas:

For example, TCAP found that the average consumer living in one of the areas that opted out of deregulation, such as Austin and San Antonio, paid $288 less in 2012 than consumers in the deregulated areas. Over the course of a decade, those savings have topped $4,500 per household.

The second important result is that Austin Energy loves solar power. As a publicly owned company, they don’t need to show annual growth; for them, it’s just fine if everyone suddenly buys less electricity. Since solar power is most effective during the hot sunny days that would normally cause electricity demand to peak, more people installing solar leads directly to Austin not needing to build as many new power stations. In Italy, there are now so many solar panels that peak prices no longer occur at the same time as peak electricity usage; the new peak price zone is in the evenings just after the sun goes down. Shifting demand away from the Texas afternoon heat helps Austin to avoid the rolling blackouts that seem to happen in Dallas every summer. All of which helps explain why the Solar Energy Industry Association cites studies suggesting that solar systems do not shift costs onto everyone else; they actually reduce costs for the rest of the system.

To encourage solar power deployment, Austin Energy have a rebate program to help offset the cost of new solar installations, and a solar buyback program based on a Value Of Solar rate, set independently of the regular electrical tariffs.

So, it seemed like I had a good use case for solar photovoltaics, and I had a utility company that was actively in favor of them. The next question was whether there was a good location to install the hypothetical solar panels. Checking via Google Earth I discovered that although our house is surrounded by trees, we had a large area of unshaded roof facing south-southwest. Furthermore, the roof was tilted at almost the perfect angle.

I should probably mention that some homeowners’ associations hate solar panels almost as much as the Koch brothers. Fortunately, we have no homeowners’ association in our neighborhood. There are sometimes snarky comments in the local newsletter about how people’s houses look, but the south side of our roof isn’t visible from the street.

Everything seemed hopeful so far, so it was time to crunch some numbers… (Continued in part 2.)