Costing a solar system is complicated; there’s just no getting away from that. So I’m not going to present a detailed cost breakdown; instead, I’ll outline a few of the complexities.

First of all, solar panels vary in efficiency. Higher efficiency panels generate more power per unit area, but they also cost more. So do you buy more panels, buy better panels, or aim to use less electricity? Similarly, the inverter which turns DC electricity from the panels into AC has a certain capacity and efficiency, and there are lots of companies making them to all kinds of specifications.

Panels gradually degrade over the course of their lifespan. The output from monocrystalline silicon solar panels drops by about 0.4% per year. Manufacturers normally warranty that after 25 years their panels will produce not less than 80% of their original output. So, you need to allow for that in your calculations.

Meanwhile, new panels go down in price every year, and go up in efficiency every year. So not only do you need to work out if solar makes financial sense this year, you also need to consider whether it might make enough extra financial sense next year that you would be better off waiting a year. 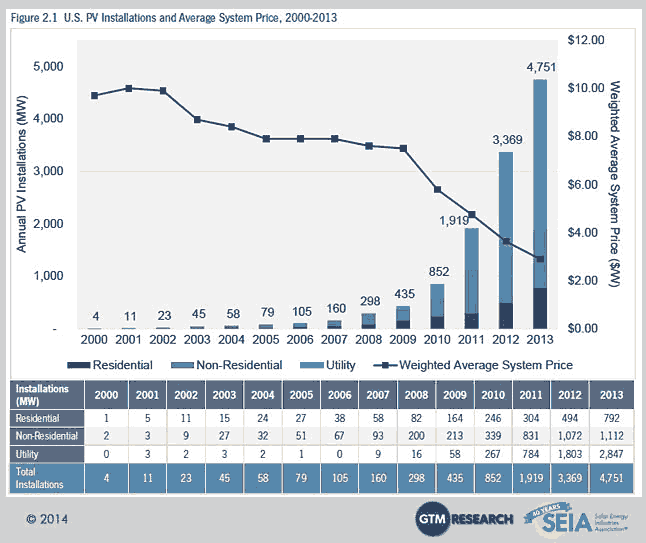 Don’t forget that electricity also tends to get more expensive each year. Although Austin hasn’t seen the kinds of rate increases the rest of Texas has, nevertheless it’s a pretty safe bet that prices will go up in future years.

In Austin, electricity rates also go up the more you use. So if you cut your usage by 50%, that won’t necessarily cut your bill by 50%. Furthermore, summer and winter rates are different.

This seems like a reasonable point at which to mention grid parity. This is an important concept to solar power; it’s the point at which solar power becomes as cheap as the cost of conventionally-produced electricity purchased from the utility grid, in dollars per watt. Ten states have already reached grid parity; the only reason Texas isn’t one of them is our relatively cheap electricity costs. You can find maps online showing projected grid parity dates for various states, as a very rough guideline for whether you are likely to find solar affordable.

Austin’s “Value Of Solar” buyback program currently gives a buyback price which is almost grid-parity level. However, a feature to be aware of is that if you generate more electricity than you use over the course of an entire year — that is, if your overall bill would be negative — you can’t carry over credits to the next year or make an overall profit for the year. Instead, the excess energy goes to the city to use, for free. This means that the ideal situation is to have your estimated generated electricity over the course of an average year be exactly the same as your electricity usage over the course of an average year, i.e. “net zero”. So if you’re thinking you might want to set up a solar power system any time soon, my first suggestion is to start recording all the consumption figures from your electricity bills in a spreadsheet, month by month.

Then there are the installation costs. They can vary a lot, and can be significantly more than the hardware costs. In our case I expected them to be significant, because our two story house with high ceilings meant that someone was going to have to hoist a dozen large solar panels up about 10 meters, probably in the middle of a hot Texas afternoon. I didn’t know who that someone was going to be yet, but I was damn sure it wasn’t going to be me. 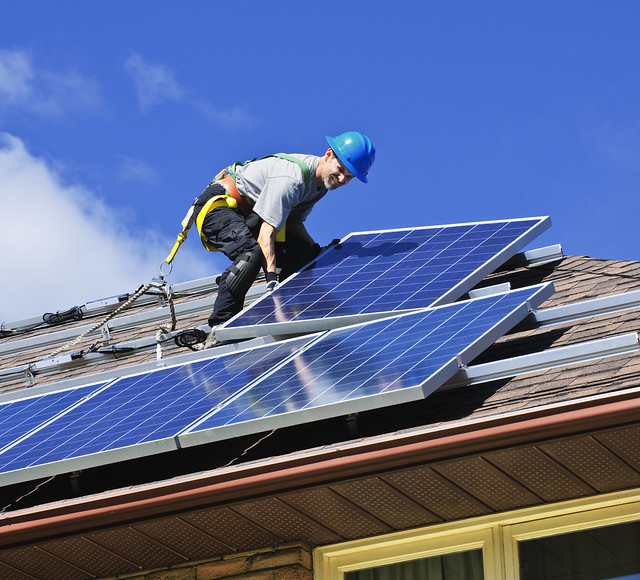 Speaking of hot summers, the expected capacity of your solar system will also depend on your geographical location. The reason Texas is hotter than Minnesota is that more solar energy reaches ground level per unit area, because of the curvature of the earth. That’s probably just a theory according to Texas schoolbooks, though. Finally there are possible effects on property taxes (and often exemptions you can apply for), rebates from the utility company, costs of permits, tax savings from federal tax rebates next April, and all the other bureaucratic pluses and minuses to consider.

I started off by ignoring most of the details, and doing some Internet searches for example costs of installed solar systems that were about the right size to match our average monthly electricity consumption. Those varied a lot from state to state, but the numbers did seem to suggest that a system would probably pay for itself in under 10 years, and not be too outrageously expensive to install.

Encouraged by this, I went to some online tools which attempt to estimate the cost of a solar system more precisely. I answered their questions, and looked at the figures they gave me. Those numbers varied less, and still looked to be in a sane price range. So, convinced that I wouldn’t be wasting anyone’s time, I decided to contact a company that does residential solar power installations. Faced with dozens of possible solar power companies, none of which I had heard of, I didn’t really have much idea who to call. However, one of my ex-managers at IBM had left to work in the solar power industry a few years back, so I contacted him and passed on my spreadsheet of a year’s electricity consumption statistics.

Solar installation companies have special purpose software to assist in designing and costing systems, which does day-by-day simulation of usage taking all the varying electricity prices and average weather patterns into account. They will do a site survey to ensure that the location is suitable, measure the angle of the sun and the number of hours of daylight, and so on. They should also help with the process of applying for any utility rebates or tax incentives.

The solar company came back to me with a proposed system that would hopefully get us to “net zero”, given Austin’s current electricity tariffs and our current typical usage. The projected break-even point would be after 7 years — that is, by year 8 we should have saved enough on electricity to pay for our out-of-pocket costs of the system. The out-of-pocket costs would be comfortably under $10,000, which seemed reasonable for a home improvement project.

The key word in the previous paragraph is “should”. No matter how much research you do, you should remember that residential solar power is in its early stages. Maybe next year someone will come up with a radically new solar cell design that’s twice as efficient, or a working nuclear fusion plant. Perhaps panel lifespan will be lower than expected, or the utilities will decide they don’t want solar customers any more.

I was an early adopter for hybrid cars. It didn’t make compelling financial sense at the time, but I wanted to help popularize the technology and vote with my wallet. I’m viewing solar power the same way. I’m pretty sure I won’t lose out overall, but I’m also comfortable with the idea that it may not be a massive money saver.

There were quite a few scare stories about maintenance costs of hybrid cars when we bought our Prius. I’m pleased to say that they have turned out to be totally false. In nearly 90,000 miles over 10 years, the only unscheduled failure has been one coolant pump. A solar system has a lot fewer moving parts than a car, and is subject to a lot less mechanical stress, so I have a sneaking suspicion that the scare stories about maintenance costs for photovoltaic solar systems are similarly baseless. Yes, we’ll need to make sure we’re more diligent about getting the tree trimmed each spring so it doesn’t shade the panels, but I don’t believe the manufacturers would be offering 20 year warranties on all the solar system hardware if they expected it to fail in that time period.

I’ve seen articles about the importance of cleaning solar panels. I asked about this, and was told that since our panels are at a fairly steep angle and high up, chances are the rain would do a pretty good job of keeping them clean. If you need to install panels at a flatter angle or near ground level, you might need to hose them down each spring. Still, not a major cost for a home-sized system. There are some design choices for solar systems that are a matter of opinion with no clear economic case one way or the other. To understand those tradeoffs, it’s necessary to understand how a grid-tied home solar photovoltaic system works.

The basic arrangement is that each panel consists of a number of individual solar cells wired up together. Cells are wired in series to multiply their output voltage up to some reasonable level, and in parallel to multiply their current output. Each panel thus ends up with a power rating; say, 230W at 31V.

The panels are then wired together to make the complete system. At this point, the same techniques of series and parallel wiring are used to raise the voltage and power output further. In the case of my system, the final voltage is around 200V.

There’s a snag, though. That’s DC voltage. Before it can be fed into the house AC circuits, it needs to be converted to AC. This is done by a device called a power inverter. The inverter steps the voltage down and converts from DC to AC, then feeds the result into the metering systems. 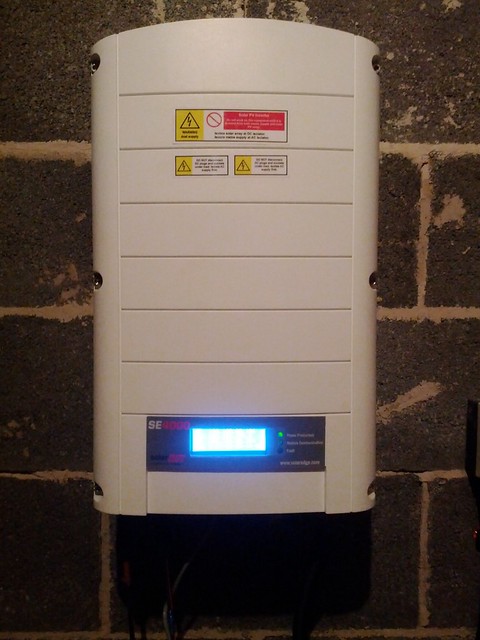 There’s another way to do it, though. Some solar systems now have a small inverter (known as a microinverter) on each panel, rather than one big inverter. One advantage of this technique is that you can then ask each inverter to tell you the state of its solar panel. With one big inverter, you can get a “Christmas lights” problem, where one of the panels fails but there’s no easy way to find out which one. The downside of microinverters, of course, is that having one on each panel is more expensive than one big inverter. This is particularly an issue if you want your microinverters to have a warranted lifespan as long as your solar panels, which you probably do unless you fancy replacing them all at some point.

Ultimately, the benefits of micro-inverters are bigger the more panels you have which need monitoring. For a dozen panels, the difficulty of tracking down a fault (which should be very rare anyway) probably isn’t an issue. If you’re a commercial installation with 50 panels, on the other hand, microinverters are probably the way to go. The solar company I worked with ended up designing our system with a single inverter that connects to two independent strands. This hybrid approach seems reasonable for a small-scale installation. 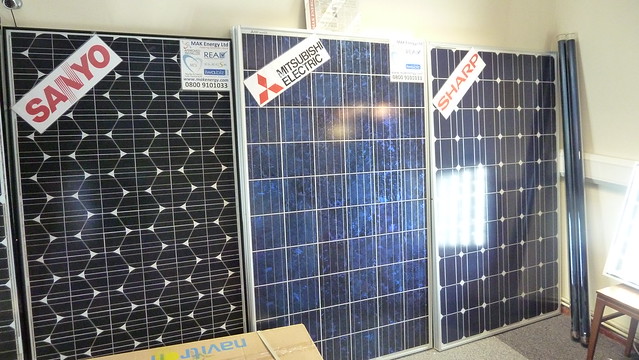 For the record, our system has monocrystalline solar panels. The original design was going to use BenQ cells, but after measuring the roof and looking at the data the recommendation was to increase system capacity slightly and switch to Hanwha Q-Cells (from their Q-Peak range). The inverter is a Sunny Boy 4000 from SMA. It has a peak efficiency of 97% and is made in the USA; SMA itself is a German company. Q-Cells are also German, their parent company Hanwha is Korean.