Once the paperwork started, I learned that our house was sufficiently old that it would need to pass an energy audit to qualify for Austin Energy’s incentive programs.

I completely understood the reasoning, too. If you want to save money and cut energy consumption, efficiency measures are almost always the most cost-effective thing you can do. So before you even think about solar power, you should make sure you’ve sorted out all of the following:

It’s even worth getting rid of incandescent light bulbs. Our kitchen has 7 floodlights, so replacing the incandescents with CFLs cut the energy consumption by nearly half a kilowatt. As well as the electricity, that’s a significant amount of heat to have to get rid of. (Next time they need replacing I’ll put in LEDs.) I also noticed the difference in heat after getting rid of the last CRT monitor from my office. The energy audit involved checks on how well sealed the AC system was, and checking the entire house for leaks by fixing a giant fan into the front door frame and measuring how easily air could be sucked through.

In the end, we needed some patch up work done to the AC vents, some extra attic insulation, and solar screens on south-facing windows to reflect heat during the afternoon. (Solar screens are basically like ordinary window screens, but the mesh is usually black and charcoal-coated instead of white. They can block up to 80% of the heat that would enter through the window, yet look like regular screens from inside the house. There are ceramic films which do the same job, but those are much more expensive.)

Once the necessary improvements had been made, the house was re-inspected, the city signed off on everything, and things moved ahead rapidly.

Rack mounts were fixed onto the roof, and the solar panels were then fixed to the racks. The cables were run through galvanized metal conduits for protective purposes. 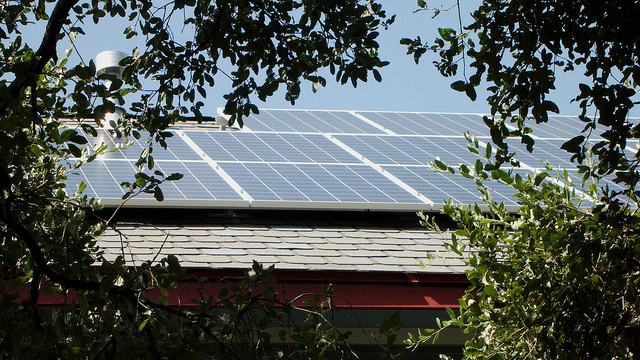 This being America, all of the electrical equipment is clearly visible, stuck on the side of the house. Down at ground level, the inverter is a gray box about the size of a record player (if you remember what those are). Below it is a connection box with a rotary switch to disconnect the inverter from the panels. Conduit pipe goes in carrying DC. Conduit pipe comes out carrying AC, which goes to a grey metal connection box with a Frankenstein-style safety cutoff lever. If anything starts to smell funny or emit smoke, the lever will disconnect the entire setup from the grid. 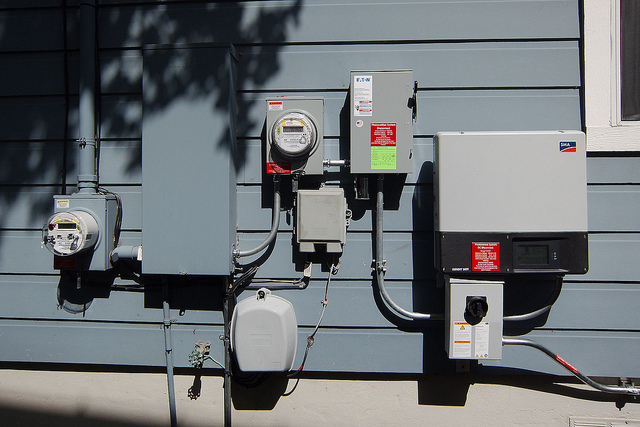 Overall, the solar system has about doubled the number of grey boxes stuck to the side of the house. It’s not going to win any awards, but it doesn’t really bother me much either. We keep the trash bins back there, after all.

The two electricity meters are normal city issue digital meters, as far as I can see. Instead of a mechanical wheel moving around, a horizontal line of LCD dashes animates. The only thing that’s different about the grid meter compared to before is that the dashes sometimes move from right to left, indicating power flowing from the house back to the power company.

In addition to the meters, the inverter logs data on power production for the two strands of panels, and displays it on an LCD as a 24 hour bar graph. Emerging from the bottom is a serial cable — an RS-485 connection, distant relative of the old RS-232 serial connections you might remember from back when the Internet required a dial-up modem. The serial cable goes into the house, where a system monitoring box reads and logs more detailed data.

The monitoring box is connected to my home network via 10/100 ethernet, and sends a packet of data to a web service out on the Internet every 10 minutes or so. It also has an option to drop XML or CSV files of data onto an FTP server, so at some point I might play with that and have my home server build graphs for me. In the mean time, SMA have a phone app and web portal, so I can check system performance without having to go outside. 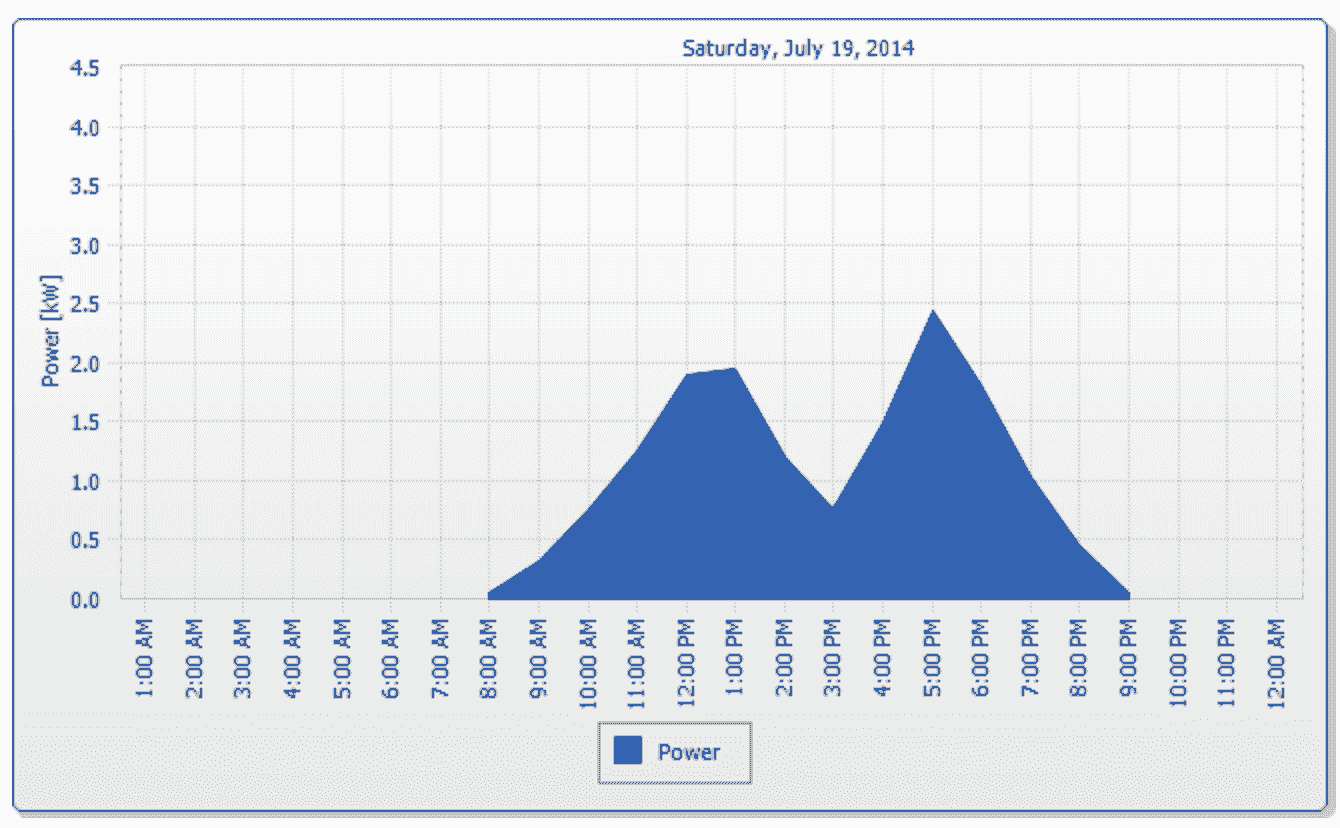 So, that’s about it. I’ll report again when I have some electricity bills to compare. For now, I just entertain myself from time to time by going out and watching the meter running backwards.