We got a good deal on a rental car, and planned to drive to Boulder and up into the mountains. The car was from Hertz, and came with their GPS system “NeverLost”. Its software is terrible, mostly because the system doesn’t respond quickly enough to anything. For example, if you miss a turn into a side street, it will recalculate — and then tell you to take the next suitable street, which we had invariably passed by the time it finished working out what to do next. Basically, any time you go off-route, you have to slow down dramatically (and hold up traffic) to give it time to recalculate.

The GPS also shows a splash screen advertisement when you start the car. It then says “Hertz!” in a perky female voice, and sits there for about 10 seconds before letting you use it. For the first few days I found this amusing, and I’d respond to the “Hertz!” with a comment like “See a doctor then!” or “Put some ointment on it!” By the end of a week, though, I was just sitting there grinding my teeth.

Having said all that, the unit was basically functional, and got us to Boulder.

As I mentioned in part 1, I’ve been aware of Boulder since about the age of 10. That wasn’t entirely because of Mork and Mindy, but I must admit I watched the show right from the first episode. It involved space aliens, and back then I’d watch pretty much anything that involved aliens, so long as my parents would let me. I immediately identified with Mork, stuck on earth trying to make sense of human behavior and human society. He was an everyman for the geeky intelligent kids of the world. And then a week before our flight to Colorado had come the news that Robin Williams was dead. This inevitably made our visit to Boulder a little more somber than it would otherwise have been. 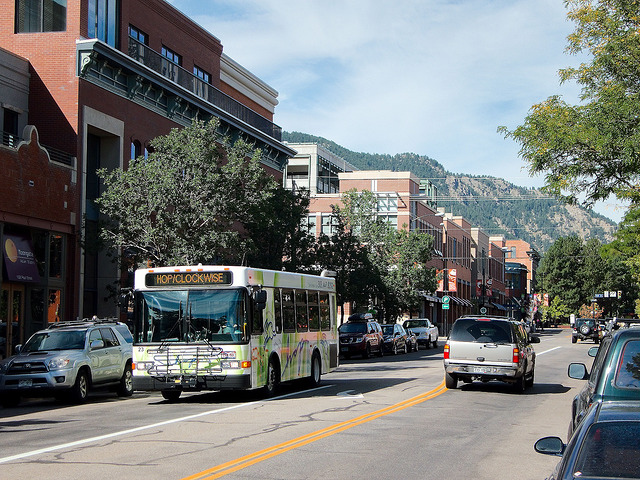 I imagine I would have found Boulder completely magical at age 10. Now that America has been home for over 15 years, it’s hard to remember how strange it all seemed at first.

Mork and Mindy’s house is still there; it’s a famous historic house, and probably the most famous building in Boulder. Of course, it was only used for exterior establishing shots; the show was actually recorded at Paramount Studios in Hollywood. Nevertheless, for a couple of weeks the family who live there had been finding a lot of Robin Williams fans turning up outside. They were dealing with it graciously — a sign simply asked mourners to remain outside the picket fence. I stood on the sidewalk and looked at the house, trying not to make things too weird, though it’s still pretty weird to travel thousands of miles to see a house that Robin Williams probably never set foot in.

The other thing that’s weird about Boulder is that it’s really, really white. Cambridge Massachusetts is 67% white. Austin Texas is 80% white, though that figure drops to 44% if you follow the Texas rule that Hispanic people aren’t white. (Which I still find ridiculous, but I suppose you can’t expect racism to make sense.) Austin is troubled by its dwindling black population; but Boulder makes it look like an episode of Soul Train. Boulder is 88% white, and most of the rest of the people there are Asian. If UC Boulder isn’t the best place in the world for a Whiteness Studies program, I don’t know where is. 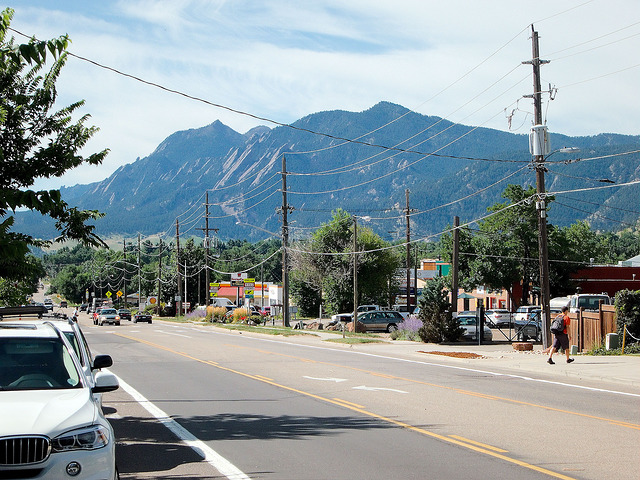 Boulder is also probably as beautiful and peaceful as it’s possible for a modern American city to be. It regularly appears in lists of the best cities to raise a child, and it has been named the most educated city in America. It’s the most liberal city in Colorado. It’s very bikeable, and the city’s shared bikes have baskets on the front labeled “You won’t believe how much organic granola fits in this basket”. The gentle self-mockery reveals that the liberals of Boulder are aware that it’s a city full of people just like them, and they’re not entirely comfortable about that. It’s all part of The Big Sort, and it’s a big problem.

Full disclosure here, I’m a stereotype myself. I have literally put on my Birkenstocks, got into the Prius, and driven to Trader Joe’s to buy a big bag of organic quinoa. However, south Austin is currently less homogenous than Boulder, and our neighborhood is an area where old-style gentrification, housing projects, and upscale urbanization are colliding. I didn’t see any of that in Boulder. So while it is undeniably a great place, I’m disappointed to find myself thinking that it would be a terrible thing if I were ever to move there. Plus, I don’t actually want to spend my life only ever meeting people just like me who I agree with about everything. 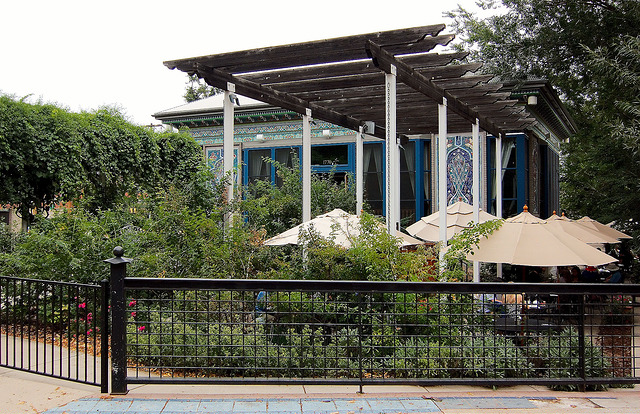 Anyway, once we’d gotten over ourselves, we had something to eat, then sat and had afternoon tea in a hand-built teahouse from Tajikstan. And then we visited the Celestial Seasonings factory, home of herbal (and some non-herbal) teas that are sold worldwide.

I didn’t know much about Celestial Seasonings before going on the tour. We had some of their tea at home, but not out of any particular brand loyalty. It turns out that all their products are made in the one factory in Boulder, using only natural (and often organic) ingredients. It’s all highly automated; forklifts load sackloads of ingredients at one end, and a robot loads packages of boxes of teabags at the other. In the middle, pride of place goes to the enormous tea-bagging machine.

They’re very proud of their tea-bagging. The machine produces stringless, seamless bags of natural fiber. You can catch a glimpse of it if you visit part 4 of the virtual tour on their web site.

Outside the factory is a field full of prairie dogs. For a few years back in the 90s, the company had decided that it wasn’t happy having thousands of large rodents on its doorstep, and had set about poisoning them; but that ended in 1999, and at this point there’s a big population of remarkably docile and fearless ground squirrels you can enjoy watching on your way to and from the factory.

There was one thing I didn’t get to do in Boulder. My wristwatch synchronizes itself to WWVB, a radio signal sent out from Fort Collins that is synchronized to the F1 atomic clock at NIST in Boulder. The F1 in turn is being checked against the new supercooled F2 atomic clock. Unfortunately, thanks to security paranoia, it’s no longer possible for random civilian atomic clock enthusiasts to visit NIST.

I don’t know why mountains are such a big deal for me. I didn’t grow up near any, though there were some pretty big hills to deal with when I went out on my bike as a child. I don’t think I experienced a real snow-covered mountain until Mount Rainier in 1998 — but what a mountain that was! Spring snowmelt had activated every tiny river and waterfall, trees and ferns were everywhere, and clouds and snow drifted past, hiding details and making the landscape mysterious.

The Colorado Rockies in August aren’t like that. As we drove up into Rocky Mountain National Park, the weather was clear and sunny. At the Alpine Visitor Center — altitude 3,713m — there were just a few patches of snow left on the tundra. Yet still, the view filled me with happiness.

Was it high altitude euphoria? I hadn’t noticed any problems during our days at Denver base camp, but now we were at twice the altitude we’d experienced on Rainier, and it was definitely harder to get enough oxygen. As we walked up the trail to the nearest peak I forced myself to slow down and take deep breaths.

Somehow when I’m on a mountain I become hyperconscious of the fact that I’m standing on a tiny ball of rock covered with a thin film of atmosphere, hurtling through the vastness of empty space. I found myself grinning like an idiot, suddenly filled with energy and enthusiasm for life, marveling at our place here on earth. 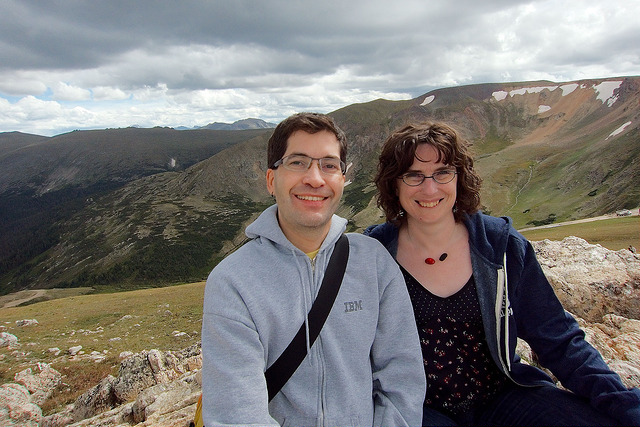 Whether you want to put that down to scientific awe, hypoxia, or something more mystical, mountains are something I strongly recommend you experience if you have a chance.

Back in Denver, we went to Wings Over The Rockies Air and Space Museum. It’s a large disused aircraft hangar which has been converted into a showcase of assorted flying machinery — plus, for some strange reason, a 3/4 scale model of a Star Wars X-Wing. I learned that private jets such as the Learjet are much smaller than I had imagined them being. Military jet fighters, meanwhile, are significantly larger than I had thought. I also had the delightful experience of seeing what a modern atomic bomb looks like. 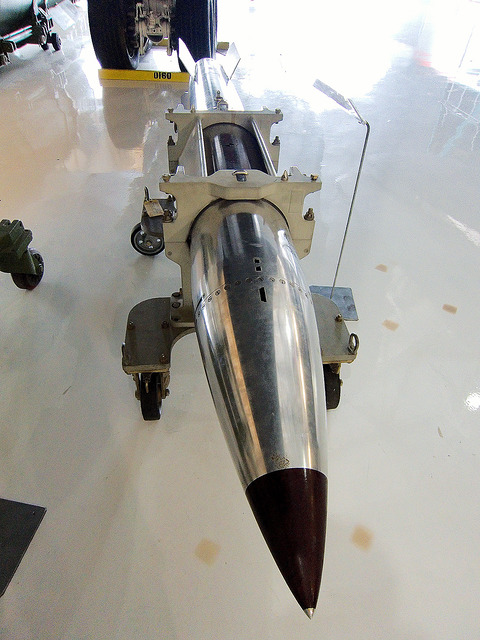 We also visited Denver Zoo — and headed straight for the birds. The highlight of the day was the Lorikeet Adventure. Rainbow lorikeets are medium sized parrots which feed on fruit, nectar and pollen, and the zoo allows you to buy a small paper cup of parrot smoothie and hand-feed them. 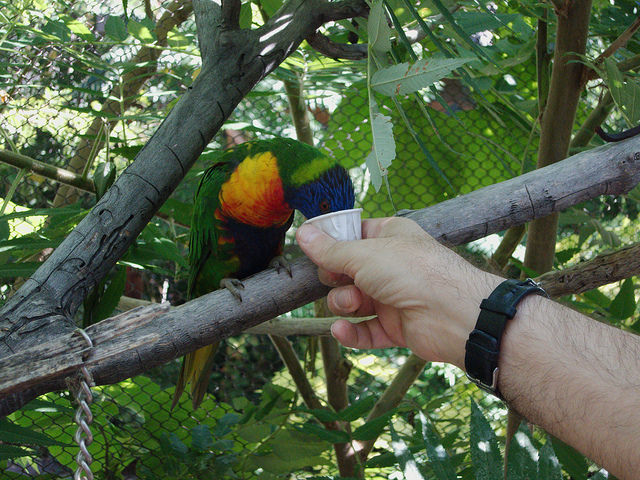 Near the zoo are the Botanic Gardens. They were holding an exhibition of glass artworks by Dale Chihuly. The sculptures had been incorporated into the gardens, and were beautiful. 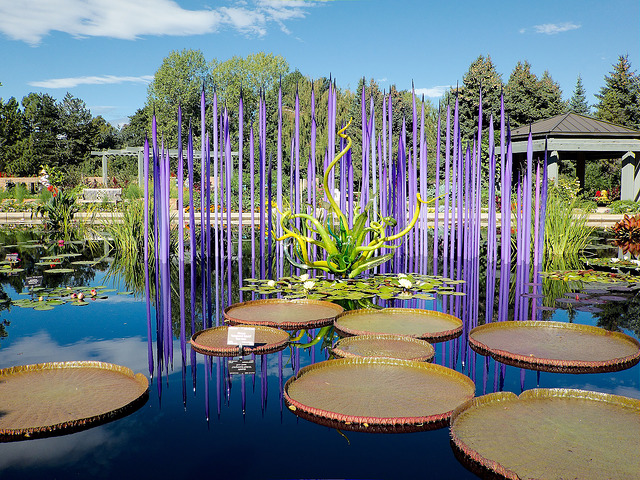