So, I ordered a batch of Soylent, and it finally shipped to me. Before I talk about my experiences, though, I feel like I should head off a few common criticisms.

I don’t hate food. I love food in almost all its varieties. I love salads, curries of all nations from India to Thailand, pizza, pasta, stir fry, tacos, bread, omelets, flatbreads, hummus, all kinds of foods. I enjoy cooking, too — it’s very satisfying to create a meal entirely from whole natural ingredients. While the founder of Soylent apparently “resented the time, money, and effort the purchase, preparation, consumption, and clean-up of food was consuming”, I don’t resent it at all.

However, I also work full time. Cooking is time consuming, and so is going out to lunch. While I occasionally throw together something fresh or treat myself to a trip somewhere, mostly I end up eating something microwavable. From a nutritional standpoint, that’s less than ideal. My vision for Soylent is that it might be a more nutritionally complete zero-prep lunch option, and that it might help me make it through the afternoon without needing to snack.

“The idea of Soylent is nutritionally naïve.”

Yes, I know. Micronutrients, phytochemicals, antioxidants, gotta have ’em. And I’m well aware that science has been hideously wrong in the past about what makes for a healthy diet, so chances are Soylent is far from ideal nutrition. But seriously, have you looked at what’s in microwaveable lunches, let alone fast foods?

Make no mistake, I think it would be a bad idea to move to an all-Soylent diet. I’m almost certain you’d be missing something important. Which is why I have no intention of doing that.

“There are plenty of other meal replacement drinks.”

Yeah, but if you look at the ingredients, most meal replacement drinks are way worse than Soylent. In particular, most of them have far more sugar than is healthy. Ensure has 15g of sugar, which is two meals’ worth of sugar, and only 18% of your protein so it fails as a meal. The others are even worse. The Ensure “Heart Health” blend has 19g of sugar, which is going to look like a sick joke in a few years. Kelloggs Special K protein shake has 18g of sugar. Gatorade’s Protein Shake has 20g. And so on.

“Soylent is full of carbs!”

My personal experience is that non-sugar carbs aren’t a problem for me. My weight has been stable for several months now, and my body fat is slowly decreasing, on a diet with AHA-recommended sugar levels but unlimited quantities of non-sugar carbs — eating as much as I want to eat. Your mileage (and spare tire) may vary, but for my body it seems to be all about the fructose.

Yeah, I read all the reviews, from the New York Times calling it “a punishingly boring, joyless product” to Gawker’s description of it as “like watered-down semen”. So let me talk about my first day’s Soylent experience.

My notional full week’s supply of Soylent — i.e., 21 meals’ worth — arrived with an instruction booklet and a BPA-free pitcher for the fridge. There was also a metal scoop for measuring smaller quantities. The smell of the powder is unlike anything else I’ve ever smelled before. Not offensive in any way, but unfamiliar, even though it has components that hint at the familiar. I’d gone for the non-vegan version, which uses fish oil as part of the mix; they’re working on a vegan option. 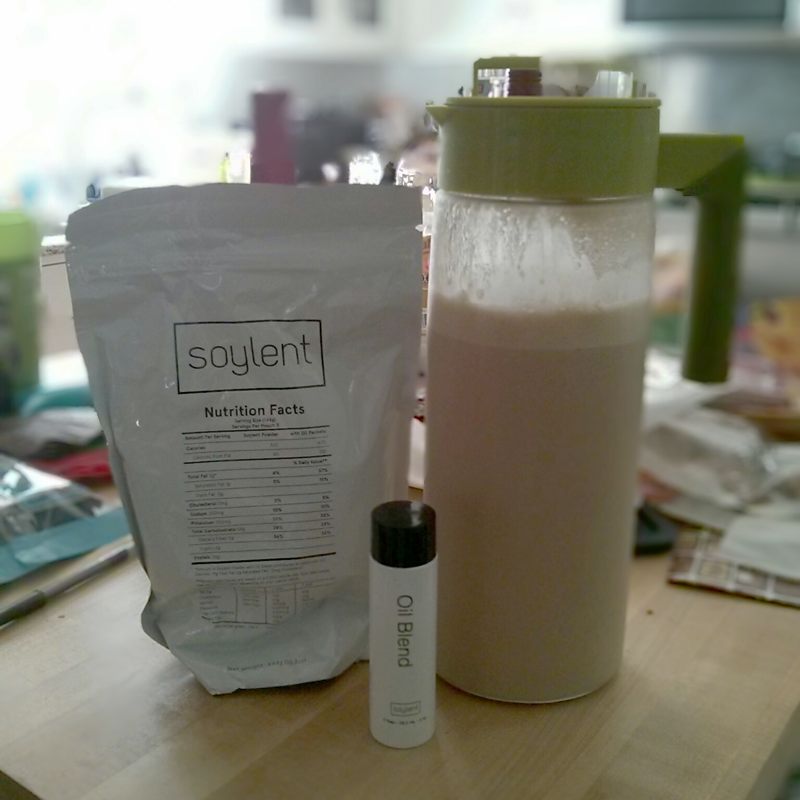 The prep process for a full batch is simple: empty a packet into the pitcher, top up to nearly full with water, shake to mix, add the contents of a fish oil bottle, shake again to mix that in, then top up with water to the top of the pitcher. A meal is then around 475ml of the liquid, which I poured into a glass with some ice. I had waited until I was seriously hungry, to give the concoction a challenge. I was also somewhat jetlagged after spending the previous day traveling home to Austin, Texas from Minneapolis.

Contrary to Gawker’s claim, the mixed liquid is reassuringly unlike semen. It closely resembles the thinner pancake batter used to make crepes. That’s also the closest thing I can think of to describe the taste — like pancake batter, but a bit less salty and slightly sweeter. Reminiscent of some meal supplement shakes, but much less sugary.

I don’t know why some people find the taste unpleasant. I found it completely inoffensive. I had absolutely no trouble drinking the entire glass. In deference to concerns about glycemic index, I sipped it slowly over the course of an hour or so.

I’m a rapid metabolizer — drugs that take weeks to affect other people can hit my system in a few hours. My mood is also strongly affected by food intake. By the end of my Soylent lunch hour, I realized I was feeling happier and more energetic. It was almost like the warm contented glow I get after eating a really good curry, but (of course) without the curry part. I was no longer hungry.

So, so far so good. Now to wait and see if the deadly farts manifest themselves.