Two innocent police officers were murdered in New York last week. However, something about the official statement from the NYPD really troubled me.

« A [New York] Daily News investigation found that at least 179 people were killed by on-duty NYPD officers over the past 15 years. Just three of the deaths have led to an indictment in state court. In another case, a judge threw out the indictment on technical grounds and it was not reinstated.

Only one officer who killed someone while on duty has been convicted, but he was not sentenced to jail time. […] 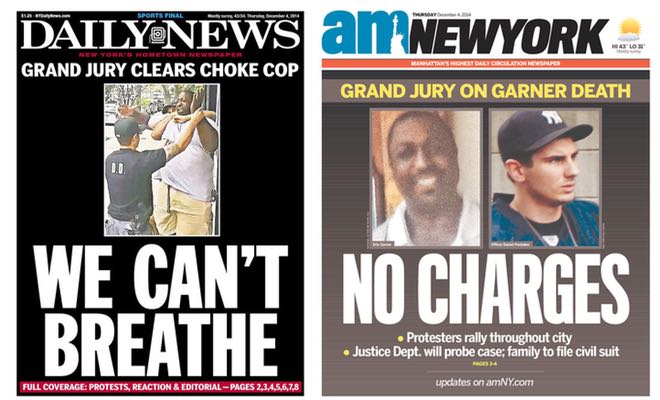 « Protesters say the NYPD went even further, pulling out handheld LRADs — sound cannons that can be used either to amplify police communication like an extra-loud megaphone or cause severe pain and annoyance with an extra-loud “warning tone” — and using the latter function.

Keegan Stephan, a 30-year-old paralegal and activist, says that after he saw three officers arresting someone, another cop used pepper spray on a crowd of onlookers.

“A cop walked by and liberally pepper-sprayed all of us without any warning,” Stephan says. “You could smell it halfway across the block,” he says. “This horrible cat-piss pungency permeated the whole corridor there. Protesters started running away. And then police started using the small, handheld LRAD. » 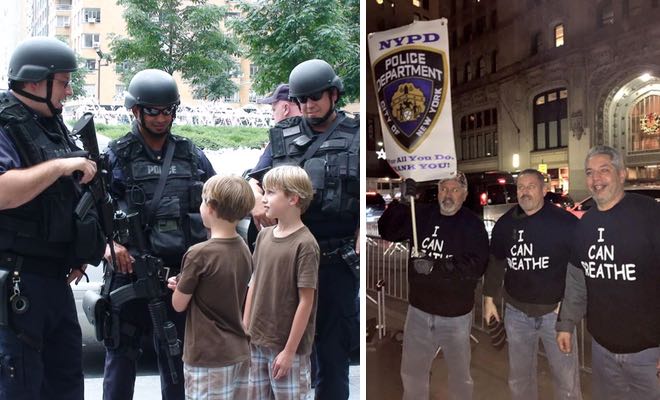 « The protests in Ferguson, Missouri, set off by a policeman’s shooting of an unarmed black teen last week, appear to be spinning out of control — not because crowds are rioting nightly but because law enforcement is operating as though they are in a war zone. Peaceful protesters are facing nothing short of a domestic army, armed with military equipment, waiting for a provocation. »

“Today two of New York’s finest were shot and killed, with no warning, no provocation. They were, quite simply, assassinated,” Police Commissioner William Bratton said. “Targeted for their uniform and for the responsibility they embraced to keep the people of this city safe.” »

Look, people, we need to do something before more innocent police officers are killed, and pretending that the incident was totally unprovoked is not going to help.

This incident illustrates to me why it’s important that when police officers choke a man to death on video for the ‘crime’ of selling untaxed cigarettes, and the city coroner rules it a homicide, those officers are at least charged with a crime. Finding them innocent in a court of law would be one thing, but not even bothering to charge them with an officially identified crime is an outright insult.

This incident also shows why it’s a bad idea to have racial quotas for your unconstitutional stop-and-frisk exercises.

This is why it’s a bad idea to routinely equip police with military body armor, riot helmets and automatic rifles, even though policing is the safest it has been since World War II. It’s why it’s a bad idea to equip your police with military weapons and allow them to use those weapons on peaceful unarmed protesters. I’ve read that in Iraq, UK forces didn’t wear the armor and helmets the US forces favor, because that makes you look like Robocop and makes people more willing to attack you.

This incident is why, when an officer prevents another officer from choking and beating a suspect who is already in handcuffs, and she then gets beaten by her fellow cops, you don’t fire her.

This is why you fire police officers who make inflammatory statements on social media. Police unions are now warning officers not to mock people on social media, and not to make unnecessary arrests — that is, to follow a standard of professional behavior which ought to be part of the basic job requirements. It shouldn’t have needed a tragedy like this to get that message home.

And most of all, this is why you don’t boast about your police force being an army and make them political tools.

Because if police are allowed to dress and act like an overwhelmingly powerful occupying army that can break the law with impunity, then people will begin to treat them that way. No matter how wrong it is, that’s how people respond to a military occupying force that they perceive as corrupt. The murdered who killed the two NYPD officers apparently invited people to follow him on social media and watch what he was going to do, yet nobody gave warning. Allegedly 911 dispatchers made comments that the NYPD ‘deserve it’. That should deeply worry the NYPD, and anyone who cares about the safety of police officers. When you can’t even count on 911 dispatchers to be sympathetic towards police, you have a serious problem.

Make no mistake, the people who have defended excessive use of force by police this year are not defenders of police officers. They are escalating the breakdown of law and order which will lead to more police officers getting murdered. And it should go without saying that the people who are trying to exploit the situation for partisan political gain are the lowest of the low.

Body cameras are not the solution, though they do help exonerate good cops. One problem is that bad cops seem to turn them off; but the Garner case shows that video evidence by itself is worthless unless people are held accountable.

And let me emphasize: it’s not enough for police to merely be fair, honest and trustworthy. They need to be seen to be those things, which means they need to practice openness and accountability. They need to make sure level of force exerted is appropriate to the problem, and stop punishing cops who decide that shooting someone is unnecessary.

If the US doesn’t roll back the militarization of police and tackle corruption seriously, I suspect that assassinations are just the beginning, and that you’ll start to see people making IEDs and other booby traps. We don’t want that, right?

As Slate puts it:

Even Al Sharpton supports cops. “We are not anti-police,” he said after the Wilson grand jury concluded. “If our children are wrong, arrest them. Don’t empty your gun and act like you had no other way.”