Tonight I watched a 90 minute documentary about Thomas J. Watson Sr, founder of IBM. (No, I didn’t get paid to watch it.) The most interesting thing I learned wasn’t about IBM, though.

Before IBM, Watson worked for the National Cash Register Company, aka NCR. The head of NCR at the time was John Henry Patterson, who makes Steve Jobs look like the Dalai Lama. As well as randomly terminating the employment of people who failed to answer even trivial questions to his satisfaction, Patterson would sometimes lay off executives just to “break their self esteem”, and then hire them back once they clearly knew he was alpha bastard.

Patterson had promoted Watson to NCR’s sales manager, and told him to go out and set up businesses pretending to be independent buyers and sellers of used cash registers. These fake businesses would then offer prices the competition couldn’t match, buy NCR equipment to take it off the market, and so on. The used cash register market was ruined, and stores were left with no alternative but to buy new equipment from NCR.

Unfortunately for Patterson, he had capriciously fired several senior men who knew of this illegal scheme, and they were hired by his chief competitors at the American Cash Register Company. This inevitably led to a lawsuit, a full Sherman antitrust investigation, and convictions for 30 NCR execs including Watson. They were only saved because Watson arranged emergency relief for flooded areas in Ohio, and public opinion started to turn in NCR’s favor as a result. Once the antitrust problems started to blow over, Patterson wanted to go back to business as usual, but Watson apparently had the temerity to disagree with him.

Patterson had a way to deal with executives who particularly displeased him. in a previous case, he had the businessman’s desk and chair dragged out onto the lawn, where they were set on fire. Apparently Watson’s desk was similarly dragged out and burned, and the man himself was dismissed. When other employees asked where Watson was, Patterson simply said “Fired.”

Another interesting historical tidbit concerns IBM’s famously restrictive alcohol policies. (Basically, even today it’s not allowed during working hours unless provided by the company.) This dates back to when Thomas J. Watson was a traveling salesman selling sewing machines. One day he made a really big sale, so after lunch he went into an inn for a celebratory drink.

When he staggered out several hours later, someone had stolen his horse and cart and all his remaining merchandise. And that’s why I’m not allowed to drink beer at lunchtime… 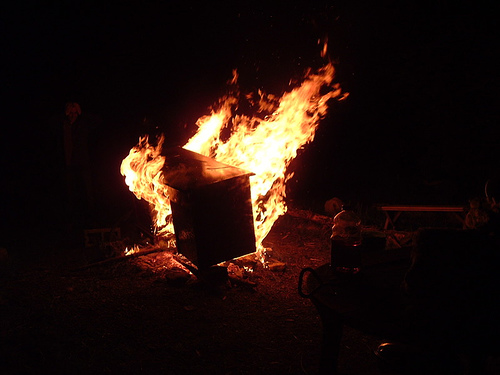