If you tried to develop a game specifically to rile gamergaters, you might come up with something like “Sunset”. Consider:

Unfortunately, few are likely to make it past the first few days to discover the true message of the game. Expecting a straightforward point-and-click adventure, they will become frustrated and bored in no time. Meanwhile, the dedicated art game fan won’t become bored until much later…

Tale of Tales have set out to tell the story of a civil war from the point of view of a civilian, rather than a soldier. Their point: that for most people there is no excitement in violent political struggle. Normal life goes on in its banality. Yet the effects of the conflict are felt nevertheless, gradually grinding down the protagonist. She seeks escape from her worries in the mundanity of the chores she was initially employed to perform. Eventually, though, the various stresses make her crack, and she asks in a mixture of anger and despair how much longer her situation must go on.

There’s something brave to the point of stupidity about this game. Less determined game designers, upon realizing that their message required making the player feel bored to the point of anger, would have tried to come up with a different story. Tale of Tales plowed right on regardless. That section of the game makes me think of the historically accurate pistol duel in Kubrick’s “Barry Lyndon” — it’s painfully slow, it’s tense, it’s irritating, it’s unbearable, and that’s exactly the point.

It’s rare for a game to elicit an actual emotional response from me. Video games are still in something analogous to the world movies were in during the 1950s. Action! Adventure! Monsters! The first game to make me care about a protagonist was LucasArts’ “The Dig”. For all its flaws, “Sunset” managed that same trick, and for that minor miracle alone it deserves high praise. The fact that it dares to tackle issues of race and class in a serious way, as well as critique capitalism, makes it a highly unusual game. On which note, I should mention that Tale of Tales is now defunct. Their finances didn’t work out. So the game’s musings on art take on a whole new level of significance. 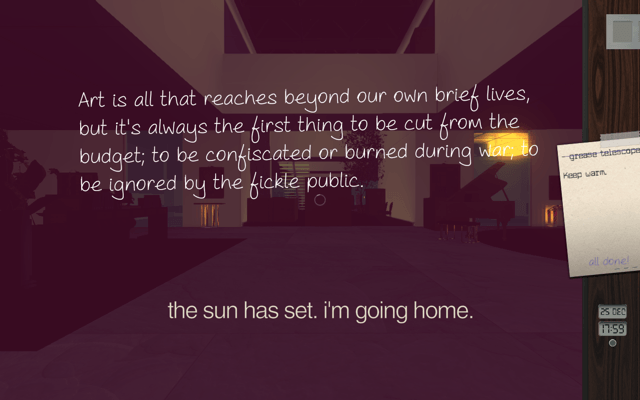 Yes, the game has technical flaws. There are some graphical glitches, some typos, and it crashed once. It’s also a game only a select few will enjoy, and I can’t quite recommend it as a full price purchase considering the other games out there at the same price point. You need to be an explorational roleplayer, have a great deal of patience, and it would probably help to be into mid-century modern design. If that sounds like you, I’d suggest picking up “Sunset” whenever you see it on sale. (At the time of writing, it’s available as part of the Humble Weekly Bundle at a steal of a price.)