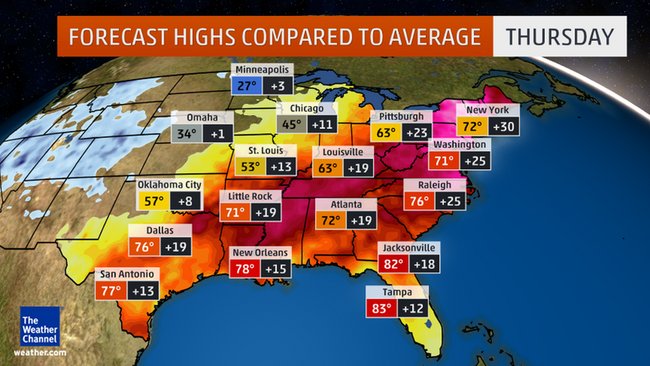 Of course, that’s just weather, not climate. When you average over the entire globe, for the entire year, things don’t seem so crazy. The global climate anomaly is around +1°C. At the Paris climate talks, politicians committed to keeping it well below +2°C. To do that, they’ll need to somehow turn carbon emissions negative, so good luck with that. Yet by focusing on the global climate, the (probably empty) promise is skipping some important details.

For starters, temperatures are already at +2°C across most of the Arctic, and at +3°C in some areas. Peak ice levels are at an all time low, and 70% of that ice is fresh first year freeze. Overall, Arctic temperatures are rising more than twice as fast as temperatures for the rest of the planet.

Meanwhile, studies suggest that scientists have been dramatically underestimating the effect of arctic methane release. Methane is 25 times more potent than CO₂ when it comes to global warming effects.

Unexpected new craters in Siberian permafrost are suspected to be the result of methane deposits being released. The Arctic Methane Emergency Group say that the tipping point has already passed; we’re in a feedback loop where the warming we’ve caused has triggered the release of methane from lakes and tundra, which will cause more warming, which will release still more methane, and so on.

None of this was accounted for in those IPCC estimates, which have turned out to be overly optimistic. Back then, 2 meters of sea level rise by 2100 was considered to be a worst case scenario. Now James Hansen — who, let’s remember, was right — says we’re looking at 3 meters in 50 years, maybe worse. Along with the sudden exponential ocean rise will come jet stream disruption, acidification, and massive species die-offs.

But forget about all that for a moment, and focus on the water levels and the ever-increasing severity of storms. My advice to anyone who leaves near sea level, or near a flood plain, is very simple: move. If you don’t, then in the next decade or two you’ll be flooded out at least once.

You live in New Orleans or Newark? Get the hell out of there over the next few years, before the situation gets too bad to be denied and your real estate becomes worthless. A three meter sea level rise means those cities are fucked, they’ll be half underwater even before the storms hit. Go check a map if you don’t believe me.

If I’m wrong, well, come back in 10 or 20 years and have a laugh at this post. Consider it my gift to you. If I’m right… Well, let’s hope I’m not right, and that James Hansen is wrong, and that the scientists studying Arctic methane release are wrong too.