I woke up to a faint buzzing noise and the voice of the suit computer telling me that the life support systems were online. A bright sun shone through my visor as the computer continued its restart routine. I got up and looked around the landscape. It didn’t look good.

My Rasamama S36 scout ship was a few meters away in the middle of a plain of what looked at first glance like assorted crash debris. There was a tattered marker flag of some sort — had this location been picked to be a trading post or habitat in the past, but never made it? 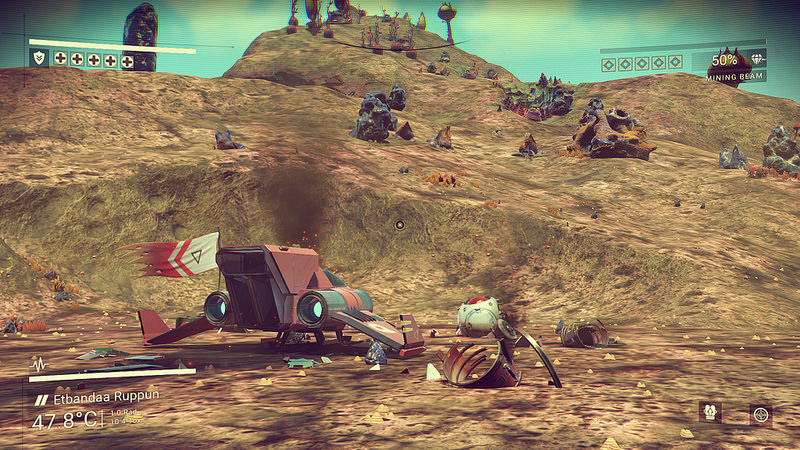 The computer told me that detailed scanners were offline, but that the planet was dry, hilly, rich in flora and with moderate numbers of living creatures. The temperature outside my suit was a punishing 47.8 celsius. I decided to rename the planet New Texas.

My multitool, with its miniature mining laser, had survived the crash. I was soon able to find some outcrops of iron ore and extract enough metal to patch up my exosuit. As I did so, the suit warned me that cooling systems were already down to 75% energy. I gathered some more iron and climbed into the ship to assess the situation.

The metal I had collected was enough to make some carite sheets to get the launch thrusters repaired. No fuel, though; I was going to have to find that. I cooled off in the ship for a while, then set off to scavenge some more.

I found the distress beacon that had led me to this disaster zone, and activated it. A strange red spherical polyhedron emerged and spoke to me. Maybe it was the heat, but it didn’t seem to make much sense — either it was called Atlas, or it wanted me to find Atlas? Either way, nobody else seemed to be around to help me out, so I agreed to follow its enigmatic guidance. 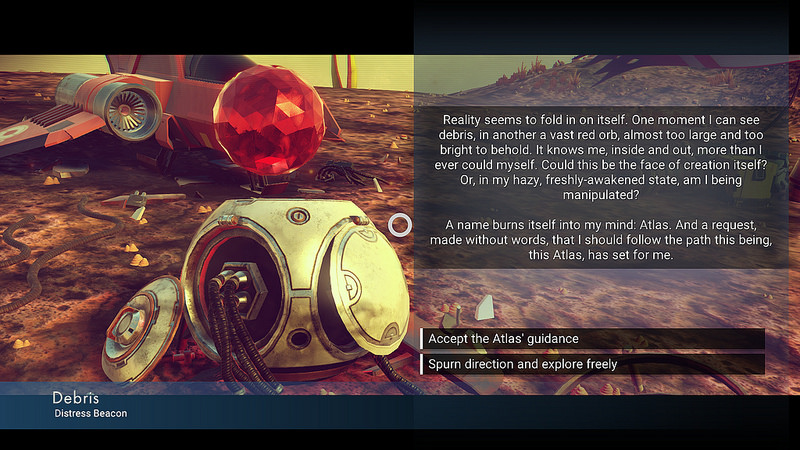 By now the sun was setting, and the temperature quickly dropped to something merely unpleasant. I wandered a little further afield, zapping red cactus-like plant nodules with my hand laser to harvest the carbon locked inside them. I soon had enough carbon to repair my suit scanner, and began cataloging a few of the strange plants nearby. As I was doing this, I was suddenly attacked by some sort of scuttling spidercrab. I backed away from it and tried to scare it off with my laser, but it was surprisingly persistent at tracking me down. I realized that if I turned and ran I might not make it back to the ship without being pincered to death, and focused the laser on it for several seconds at full blast. Finally the heat got through to it and it started scurrying rapidly away in tight loops. I managed to limp back to the ship before sunrise and recover.

Once I had healed and recharged my suit’s life support I struck out for an unknown resource my suit scanner had picked up. I found my way down to an abandoned survey station on the Jukish Plains, where I could hide from the merciless heat for a while. On a hill above the station I finally found what I was looking for — the massive outcrop of heridium ore I needed to fuel up my ship for takeoff. 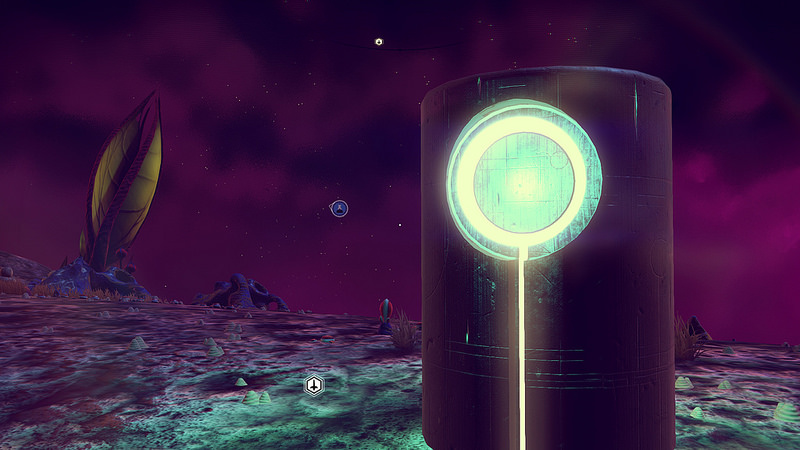 Now that I could at least jet around the planet more easily, I explored further afield. I found an ancient Vy’keen monument, and learned some words of their language from its mysterious knowledge stones. If this was a Vy’keen system, I would need to know as much vocabulary as possible for trading…