In part 1 I covered quick and easy things to do (albeit mostly requiring money). In part 2 I covered privacy and protection against authoritarian government.

Now for the part where it gets dark: thinking about how to protect yourself in the longer term, through and past the Trump regime and its effects.

I’ve seen people say they’ll move to another state, or another country. I believe that’s a bad move, for two reasons.

Firstly, if you leave then you are abandoning the people who need your protection but who don’t have the money or other resources to leave.

Secondly, you can’t run from fascism. It spreads like cancer.

In case you haven’t been reading the international news, the UK has a hard-right-wing authoritarian government led by a post-truth politician bent on forcing foreigners out of the country. France has Marine Le Pen, leader of the Front National, who is likely to gain power in the next elections. Holland has Geert Wilders, who wants to ban Muslims from immigrating. Canada? Yes, Canada has racism too, particularly against the Indigenous population. Germany is probably your best bet in Europe right now, because so much effort was spent clearing out fascism after World War II; however, it’s expected that Angela Merkel will face trouble getting reelected. Australia? Amazingly inhumane racist policies.

Yes, there are places you can go which lack anyone like Trump in government, but they’re harder to find than you might think.

Having said all that, it’s not a bad idea to make sure that you can leave the country in a hurry if things get really bad. Make sure you have at least one up-to-date passport, for example, and enough money saved for plane tickets. If you have kids, make sure you’ve got passports for them too.

Prepare for a recession

Since 1900, a recession has happened every single time a Republican has been in the White House. That’s not from some leftist publication, that’s according to S&P Capital IQ, quoted in Fortune magazine. Since 1947, there have been 8 recession under Democratic presidents, but 41 recessions under Republican presidents, according to Politifact.

So, expect a recession, and maybe a full-on depression. Try and make sure you have money saved away.

As far as 401(k) investments go, a Trumpublican government will be good for big corporations, what with deregulation and massive corporate tax cuts, and quite likely attacks on workers’ rights. You’ll notice that the S&P 500 has continued to rise quite nicely since the election. A recession may hit that, but don’t imagine that bonds are the answer — the Republicans already showed in 2015 that they were willing to risk the US defaulting on its debt in order to get concessions from Democrats. Trump himself suggested letting the economy crash and then doing a deal with creditors or just printing more money, and while he tried to reframe his comments, his history on paying his own debts when things go badly is well known. That’s probably why unlike stocks, bond markets took a major tumble when Trump was elected.

Overall, I think the usual advice continues to apply — go for index funds, and make sure you’re well diversified.

Trump said climate change was a myth invented by the Chinese, and his choice of an infamous climate change denialist to head the EPA makes one thing very clear: America now plans to extract all the remaining coal and oil it can from the ground, and burn it all.

This means that the predictions of the more pessimistic climate scientists are likely to be correct: sea level rise is probably accelerating. The graph of sea ice area shows quite clearly that we’ve hit a discontinuity: 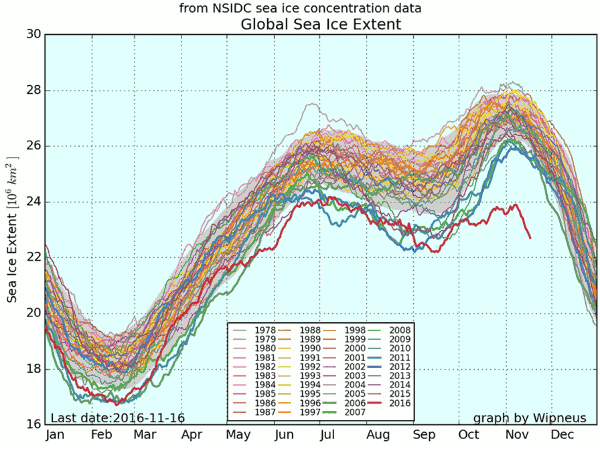 So, expect the number of days of coastal flooding to start to go up exponentially. Expect more and stronger hurricanes. Also expect more wildfires, and expect California’s drought to be permanent.

People are already being forced to move because of climate change, and you probably don’t want to be one of them, so avoid buying property on a flood plain or near the coast. I’m guessing 3′ or more of sea level rise by 2050, so plug some assumptions into the Climate Central Surging Seas Risk Finder before moving.