At the start of 2016, I was a legal permanent resident alien, married to a US citizen. When Hillary Clinton was chosen as the Democrats’ candidate, I had a hunch Trump might win. I hurried to become a full US citizen, and did so over the summer.

Given Trump’s friendliness to groups like NumbersUSA, I had a hunch that legal immigrants would no longer be safe. I suspected that Republicans would turn a blind eye to abuse of legal immigrants, or even approve of it. Sure, I wasn’t a Muslim, I wasn’t likely to be in the first round of targets. But still, why take the risk?

Again I was right. Again I wish I hadn’t been.

I know this is all depressing and you’d rather have pictures of kittens. Well, here’s something better than a kitten: 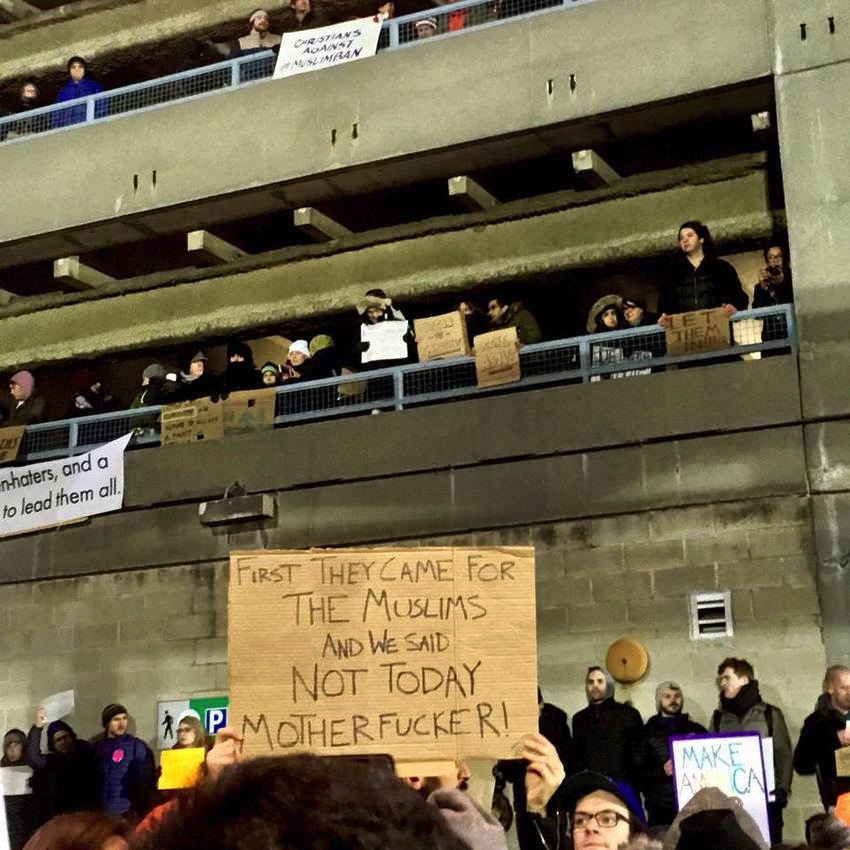 Nevertheless, the Department of Homeland Security has put out a defiant statement, and Trump’s determined to keep harassing legal immigrants:

Let me explain something about how the green card process works, from personal experience: You don’t get a green card unless you have already been evaluated and deemed not to pose a security threat.

The green card process involves having your fingerprints, mugshot and identity information sent to Interpol and the FBI for a full background check. If there’s anything questionable, you get asked about it in a formal interview. (In my case, they queried some of the border crossing dates from my passport records, so yes, they do pay attention to details.) Furthermore, this security evaluation process is repeated every time you get the green card renewed, which you have to do at least every 10 years. So the idea that green card holders need a security evaluation before travel is garbage.

The Republican talking point is that it isn’t a Muslim ban, but Rudy Giuliani carelessly admitted that Trump asked him how they could get away with a Muslim ban legally.

The White House is now proposing ‘asking’ foreign visitors for all their social media info and all their cell phone contacts. If they don’t comply, they would be denied entry to the US. They’ve also quietly made it a crime to help undocumented immigrants. As I write this, people are reporting on social media that some airport immigration staff are defying the ACLU-obtained court orders and detaining and deporting people anyway.

We have to get white nationalist Steve Bannon out of the White House. He’s said he wants to destroy the state. It was Bannon who overruled the Department of Homeland Security and insisted that the ban should apply to legal permanent residents.

I’m convinced Bannon is the one whispering all the other undemocratic and racist plans into Trump’s ear. Removing all mention of Jews from the President’s statement on Holocaust Remembrance Day, and following up with a massive ban on refugees, is exactly the kind of antisemitic dog-whistling he’s known for, and he’s the one writing Trump’s executive orders.

Worse still, Trump has now put Bannon on the National Security Council, and removed the Chairman of the Joint Chiefs of Staff and the Director of National Intelligence. This means that the broader intelligence community and the military will not be involved in national security discussions unless specifically invited.

This is fishy as hell, and likely a first step towards Trump setting up his own internal security apparatus or internal intelligence service, bypassing the military and most of the existing intelligence community. Remember, he already has his own private security force instead of relying on the Secret Service. Does he want to put Bannon in charge of his internal security organization to root out ‘traitors’? It wouldn’t surprise me.

I know there’s a lot of stuff we need to fight for right now, but I seriously think that getting rid of Bannon should be priority #1.