The big news this weekend is obviously the Women’s March. Or perhaps I should say, the Women’s Marches, because there were marches in cities across the world. This was not an urban event or a “blue state” thing. There were well-attended women’s marches in the “red states” of Arizona, South Carolina, and Utah. There were marches in Australia, South Africa, even Antarctica. There was a Women’s March in Lubbock, Texas, even though there was a dust storm. (I fact checked, and Lubbock actually lost its claim to being the ##2 most conservative city in the US, but only because it didn’t have enough population to make the revised list.)

One thing that seemed to be common to many of the marches was that the number of people attending drastically exceeded the number expected. In Chicago, they initially expected 40,000, then revised the estimate to 75,000. On the day, 250,000 turned up, so many that the actual march had to be canceled.

In Austin, I knew things were up when I arrived at the bus stop and saw how many people were standing waiting. I live quite close to downtown, and realized that the bus might be pretty full before it even got as far as our stop. Rather than risk not being able to squeeze in and get to the event in time, I walked all the way to the Texas State Capitol.

I arrived at the gates around 11:30. The grounds were already totally full, along with the streets for at least a block in every direction, and people were still arriving. The organizers had obtained 30,000 stickers to use to count attendance, but they had already run out. The march began promptly at noon, and I joined as quickly as I could make my way to the flow of people. I got back to the west entrance of the capitol grounds around 13:40, and as I left a few minutes later people were still starting out. 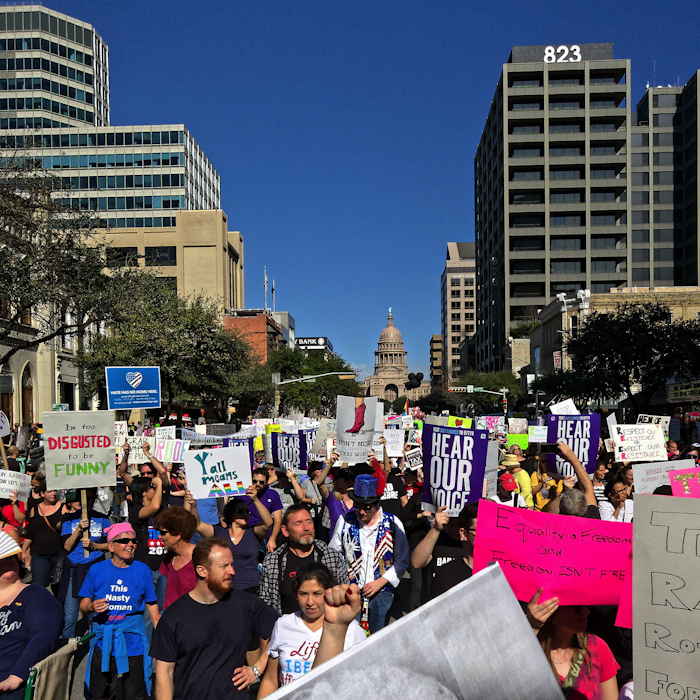 All told, it seems that the marches were the biggest protests in US history. The last time a President’s inauguration was met with such massive protests was the anti-Vietnam-war protests against Nixon in 1973 — and by the following year Nixon had been forced to resign, after being caught descending into paranoid authoritarian dirty tricks.

I saw a lot of Trump supporters responding to the Women’s March. Most of their responses could be placed in one of the following categories:

I consider all four responses to be so patently stupid that I’m not even going to respond to them. However, there was a much less frequent fifth criticism:

I’ve seen anti-Trump people make this comment too, so I thought I’d point out a few things the Women’s March achieved.

It helped us feel sane

The 2016 elections were a miserable, grueling experience. When I woke up early on election day to go work the polls, one of my thoughts was that at least it would all be over soon. Sadly, it was just beginning. Before long the nightmare cabinet nominations started, more and more corruption was uncovered, and there was a continuous stream of revelations about Russia’s ties to Wikileaks and the Trump campaign. Before long, I started to feel like I was in some kind of crazy movie; The Manchurian Candidate meets Whoops, Apocalypse, with a side order of Bob Roberts.

The Women’s March reassured me that no, I’m not crazy, I’m not alone, there are actually a huge number of people who agree that we’ve let a narcissist con artist into the White House. It’s one thing to read that most Americans reject much of the racism of the Trump campaign and reject Republican plans to repeal the Affordable Care Act without a replacement; it’s another thing entirely to see real people actively coming together to protest against racism and against eliminating people’s healthcare.

One way authoritarian regimes win is by making people feel dispirited, isolated and helpless. Getting together with a group of fellow activists is an important way to fight back and regain inner strength.

It got people talking

I’m not as chatty as a native Texan, but even so I got talking with several groups of people. We discussed things we had learned about Trump’s links to Russia, ideas for next steps after the protest, which organizations we thought were doing good work, and so on. I even explained to some confused people what the “snowflake” thing was about.

This sort of meeting and talking is good not just for strategic reasons, but because the marches were an intersectional event. Everyone had their own spin, their own particular thing they wanted to put on their protest sign. For some it was the importance saving healthcare for as many people as possible. For some, it was reproductive freedom. For some, it was the Trump administration’s corruption. For still others it was transgender rights, fighting sexual assault, or the Black Lives Matter campaign. We all got together, saw and considered each other’s messages, and put aside differences to work towards important shared goals.

If you’re not on the political left, you might not understand how incredibly rare it is to see so many different liberal and leftist constituencies working together. I found myself snapping photos just to try and capture the diversity of viewpoints. Trump did say he was going to bring the country together, maybe in a way he was right. 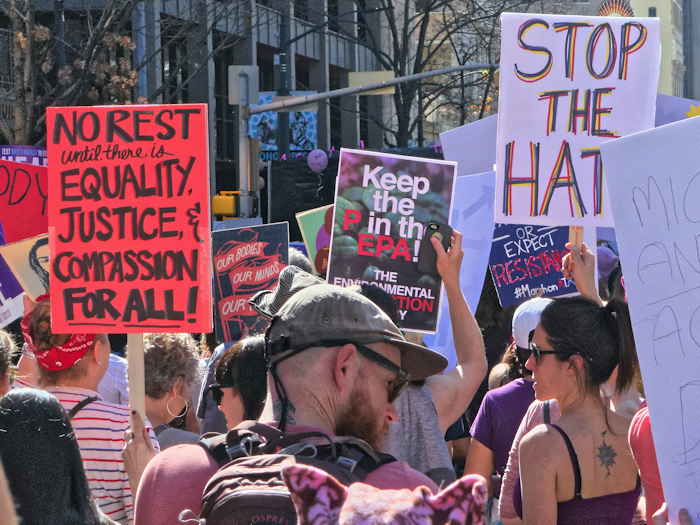 It helped organizations fundraise and recruit

Related to the above, a number of organizations had a presence at the Austin Women’s March. Planned Parenthood were fundraising, at least until the credit card machine got overloaded and they had to start taking cash donations, and they were also collecting contact details for their mailing lists.

Other organizations active at marches across the US included the ACLU, the Council on American-Islamic Relations, Amnesty International, the NAACP, and dozens more.

So if nothing else, the march has given important progressive organizations an influx of updated contact details. This is extremely valuable — if you work in business, you probably know that around a quarter of contact details change every year. For organizations trying to recruit millennials and students, it’s probably even worse than that.

There has been a common right wing talking point that all of the violence at Trump rallies was instigated by protesters, and that the left is generally violent. People making this argument have generally pointed to Black Lives Matter protests, the Seattle riots, the Dakota Access Pipeline protests, and other similar events as their evidence.

The Women’s March has blown that argument out of the water. We just had the biggest protest in history, and the DC protest went off without a single arrest. Next time someone tries to tell me that the left is violent, I’ll just point at Saturday’s marches as proof that there’s nothing inherently violent about left wing protests. Yes, there was some violence at the inauguration, with 217 being arrested. Yet 24 hours later, ten times as many protesters spent a day marching and shutting down streets, with zero arrests.

How could this be? I’ve a hunch it has something to do with my observation that the Austin Women’s March had practically no police presence given the size of the event. There were police directing traffic and showing marchers the route, yes. There were also a few police here and there on the sidewalks, watching for any criminal activity. But I’ve been to other protests, as well as anarchist rallies, and I was very surprised at the low key policing.

Another factor is likely that this was billed as an event for women, and that it was a very white event. Riot police beating white women just doesn’t make for good press coverage. Clearly we need more white presence at Black Lives Matter protests to keep the police from charging in.

I didn’t see many people out to make trouble either. There was one Alex Jones Infowars troll, and someone with an “All Lives Matter” sign, and that was it. No doubt right now James O’Keefe and his cronies are trying to come up with a plan to cause trouble at the next march, but it’s looking to me as though white women in pussy hats might be the secret weapon we’ve needed. 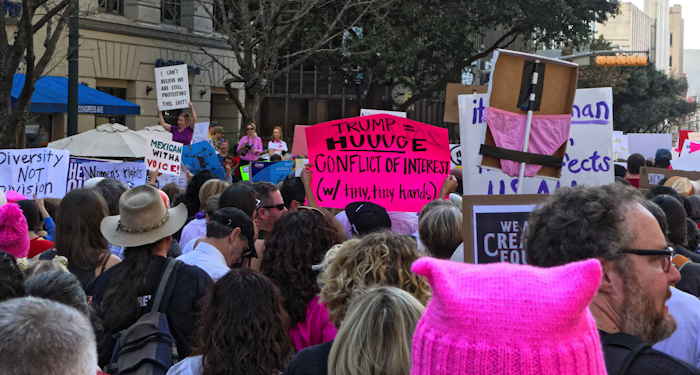 It showed the media whose side they should be on

During the 2016 election campaign, news media gleefully broadcast everything Trump said, often with no attempt to verify it first. As election day neared and pollsters confirmed how deluded some “low information voters” were, the media belatedly started flagging Trump statements as untrue in their TV chyrons, and calling out falsehoods in written articles.

Now the election is over, and the media find themselves facing an extremely hostile Trump administration. In press conferences, Trump and his press secretary have made it clear that he plans to pick and choose which questions he will deign to answer, and even deny access to media outlets who displease him.

In this environment, it’s important for the media to be reminded that the vast majority of people — even many Trump voters — oppose his key policies. Sure, polls say he has the lowest approval rating any President has ever held at inauguration, but everyone’s a bit skeptical of polls now. The Women’s March and the comparison to the inauguration crowds will hopefully have dispelled all doubt that Trump is the most disliked President in living memory — before he’s even had much of a chance to enact any of those policies he favors which his supporters are going to hate.

Which brings me to my final point…

Trump is reportedly hypersensitive about the idea that he isn’t viewed as a legitimate president. Like most bullies, he uses swaggering braggadocio to try to hide his inner insecurity. That’s why he goes on Twitter rants. It’s at the point now where his staff try to keep him from watching TV in case the poor snowflake gets triggered.

In six short months we’ve gone from Trump supporters wearing fuck your feelings T-shirts, to the President’s Press Secretary whining about how demoralizing it is for Trump when people are mean about him and his tiny inauguration.

Sure, one day of marching isn’t going to change much if we don’t follow up with more action. Yes, there’s a very real danger of people feeling like they’ve done their bit and sitting back and doing nothing else. But don’t buy the idea that the Women’s March achieved nothing.