What triggered this recent set of “Deep State is trying to take down Trump” articles? The answer seems to be (drum roll please):

That alone should give you pause: the White House’s main propaganda site started pushing the idea based on a Trump campaign talking point. But let’s go back further, to the origin of the meme.

The term “deep state” had been around in conspiracy circles for quite a few years, but was popularized in Turkey as derin devlet. From there, the New York Times identified it as a new term in 2013, specifically referring to the Turkish phenomenon.

Then in 2014, Peter Dale Scott introduced the term “Deep State” in the context of US politics, in his book “The American Deep State”. Scott’s American Deep State built on the Egyptian concept. His was steered by oil companies and Wall Street. Those are exactly the people Trump has packed his administration with, and exactly the people who are rumored to be pulling his strings.

So given the original meaning and Peter Dale Scott’s use of the term, “Deep State” would seem to apply perfectly to Trump.

Recently [the term] has been enhanced by a new meme, “the ’deep state’ versus Trump,” a theme that promoted Donald Trump as a genuine outsider, and entered the electoral campaign as early as August 2016.

Trump reinforced this notion when he expressed opposition to America’s international defense alliances and trade deals that both traditional parties had long supported, as well as by his promise to “drain the Washington swamp.” It was encouraged again post-election by Trump’s longtime political advisor Roger Stone, formerly of the Washington lobbying firm Black, Manafort, Stone, and Kelly, once a major feature of that swamp.

What seems to have happened is that in 2016, Trump’s propaganda masters saw that the “Deep State” idea could harm Trump, so they set out to use their standard arsenal of tricks to try to neutralize the term by rendering it meaningless. They were eventually given a big boost by Glenn Greenwald’s article “The Deep State Goes to War With President-Elect, Using Unverified Claims, as Democrats Cheer”, which laughably implied that the Orbis dossier was all “fake news” while urging the left to reject the intelligence services. Greenwald’s article then triggered similar thinkpieces in all the mainstream liberal media outlets. 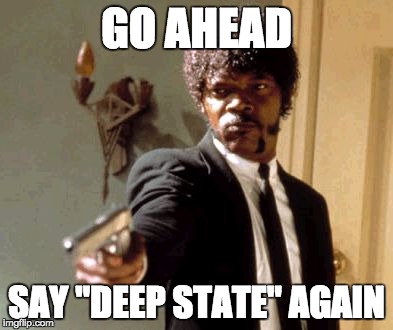 This is, of course, patently ridiculous — as is the idea that the US intelligence services are engaged in a unified conspiracy against Trump. I mean, maybe I’m gifted with an extraordinary memory, but I seem to recall that way back in November 2016, the intelligence services got Trump elected by suggesting — contrary to standard procedure as well as contrary to fact — that there might be some sort of e-mail evidence of Hillary Clinton doing something criminal. Just before the election sites like Zerohedge were telling us that the Deep State was destroying Hillary Clinton in order to install Trump. You might even have a reminder of the distant past on your phone, in the guise of the Signal instant messaging app which everyone started installing after the election so that the intelligence services couldn’t tap instant messages to round up anti-Trump protesters.

The new neutered meaning of Deep State, and the articles warning liberals to oppose it, clearly serve the Breitbart/Trump agenda. Steve Bannon would surely love it if the left listened to Greenwald and started opposing intelligence leaks for the sake of “democracy”.

Believe me, I know that the CIA and NSA are not my friends. I’ve been writing about that for decades. But while the CIA might go rogue every now and again, they haven’t stated that they want to destroy the state and start a religious crusade, as Trump’s chief adviser has.

Yes, ideally it would have been handled via a proper investigation, rather than intelligence leaks and public outrage. But in case you haven’t noticed, the Republican Party isn’t exactly in the mood to investigate or prosecute anything right now, and they control the Senate, House and Presidency. Without leaks, Flynn would still be in the White House and we’d be none the wiser. The reason why the intelligence services didn’t want that has nothing to do with globalist conspiracies, it’s much simpler:

What’s going on was explained lucidly by a senior Pentagon intelligence official, who stated that “since January 20, we’ve assumed that the Kremlin has ears inside the SITROOM,” meaning the White House Situation Room, the 5,500 square-foot conference room in the West Wing where the president and his top staffers get intelligence briefings. “There’s not much the Russians don’t know at this point,” the official added in wry frustration.

Members of the intelligence services take an oath to the nation, not to the President. Apparently some of them are sincere.

So yes, Glenn Greenwald, the intelligence services are not my friend. But you know who else isn’t my friend? Vladimir Putin. As with angrily writing in Bernie’s name on your election ballot, ignoring or rubbishing intelligence leaks and angrily holding out for Republicans to do their jobs is not going to benefit anyone but Trump and the Republican party. Stop being their useful idiot.