This is an attempt to catalog Donald Trump’s apparently worsening mental condition, because I couldn’t find any other web pages doing the job.

Remember, Trump’s father Fred suffered from Alzheimer’s during the last decade of his life, and it’s genetic.

Check out the Alzheimer’s Association list of 10 early signs and symptoms of Alzheimer’s. Note that a very common symptom of Alzheimer’s is disturbed sleep, with sufferers waking up upset and angry in the small hours. Recall that Trump’s 3am Twitter rants have become a running joke.

Again, as with the Russia stuff, I’ll leave it to others to make any definitive claims. This is just a timeline of events which may be evidence. Make up your own mind.

21 Mar 2016: Trump offers a rambling response to questions about nuclear weapons use and ISIS:

RYAN: If you could substantially reduce the risk of harm to ground troops, would you use a battlefield nuclear weapon to take out ISIS?

TRUMP: I don’t want to use, I don’t want to start the process of nuclear. Remember the one thing that everybody has said, I’m a counterpuncher. Rubio hit me. Bush hit me. When I said low energy, he’s a low-energy individual, he hit me first. I spent, by the way he spent 18 million dollars’ worth of negative ads on me. That’s putting [MUFFLED]…

RYAN: This is about ISIS. You would not use a tactical nuclear weapon against ISIS?

TRUMP: I’ll tell you one thing, this is a very good looking group of people here. Could I just go around so I know who the hell I’m talking to?

29 Aug 2016: Trump campaign insiders comment that he tends to echo the policy positions of whoever spoke to him last.

31 Jan 2017: Trump can’t recognize Rudy Giuliani, even though he’s sitting right in front of him.

17 Mar 2017: Trump has to be told repeatedly that the US can’t do a trade deal with Germany alone, and has to negotiate with the EU.

31 Jan 2017: Fails to recognize Rudy Giuliani, who’s sitting right across from him.

31 Mar 2017: Wanders out of an executive order signing ceremony, apparently forgetting that he hasn’t signed any documents yet. Mike Pence grabs the documents and follows him.

12 Apr 2017: Forgets which country he just bombed, calling Syria “Iraq”, but can remember the chocolate cake he ate.

14 Apr 2017: The Washington Post catalogs a number of sudden policy changes apparently based on who Trump last talked to.

15 Apr 2017: Jared Kushner is revealed to be involved in almost all policy issues, acting as Trump’s surrogate.

17 Apr 2017: Confused about the leader of North Korea, can’t remember either of their names and thinks they’re the same person.

11 May 2017: Says he invented the expression “prime the pump” recently.

27 May 2017: Staggers and wanders off looking confused in the middle of a meeting with Netanyahu.

4 Jul 2017: After exiting Air Force One talking to himself, fails to recognize the limo waiting for him at the bottom of the steps, and wanders off. Looks surprised as he is directed back to the limo.

11 Oct 2017: White House insiders tell a reporter that the president is increasingly unfocused and prone to dark moods.

16 Jan 2018: Trump supposedly gets a perfect score on a test for dementia.

18 May 2018: Bill Gates reveals that Trump confused HPV and HIV.

15 Jul 2018: Trump absent-mindedly forgets the Queen of England and walks in front of her.

24 Oct 2018: Trump forgets to sign his opioid crisis bill and starts to wander off until Melania reminds him why he’s there.

11 Nov 2018: It’s revealed that during a meeting in April, Trump confused the Baltics with the Balkans and accused leaders of the Baltic states of breaking up Yugoslavia.

18 Nov 2018: After wildfires hit Paradise, CA, Trump seems under the impression that the town is called Pleasure.

3 Apr 2019: Trump (again) confuses his father with his grandfather, claiming that his father was born in Germany.

28 Apr 2019: People on Twitter note that a symptom of frontotemporal dementia (FTD) is loss of balance and progressive supranuclear palsy (PSP), which causes recurrent falls that are often backwards. Sufferers often try to compensate for this by adopting a forward leaning stance. 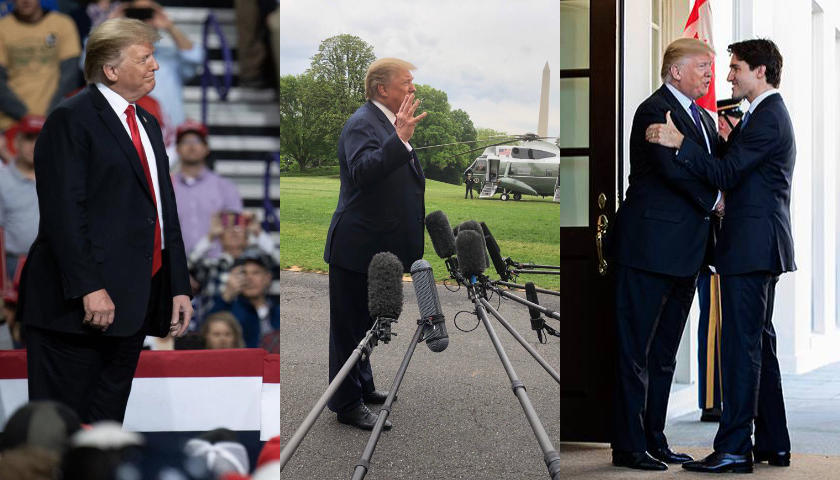 STAT magazine has reviewed decades of Trump speech, and concluded that his language has become noticeably more simple and confused.

I’m no doctor, but it seems plausible to me that Trump has the early stages of dementia. In a way this would be a positive thing, because it would suggest that his constant lying and reversing himself isn’t malice or cynicism, but simply an inability to remember anything. On the other hand, the idea of a President prone to paranoia and angry outbursts isn’t comforting at all.