So, another mass shooting at a school, and the same memes go around. I mostly have nothing to say — wake me when Republicans decide that there’s something more important than NRA money. However, there’s one small point I’d like to make regarding memes going around about Republicans and Trump making it easier for the mentally ill to buy guns. Memes like this: 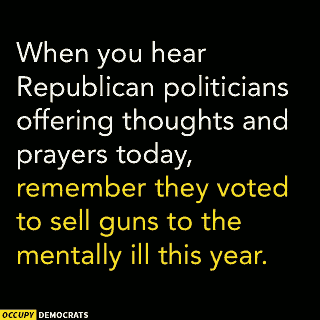 Let me start with some positioning:

Now, on to the Obama-era attempt to restrict access to guns by the mentally ill.

The text is long and dull, but basically it identified several classes of people receiving payments from Social Security who had a medical diagnosis of mental illness. One key instance was people who had been found not competent to manage their own affairs by reason of mental illness.

The intention was that this particular subset of the mentally ill be placed on the NICS background check list, and prohibited from buying guns. It was estimated that around 75,000 people would have been placed on the list.

The rule was a terrible idea for all kinds of reasons, not least because it likely wouldn’t have had any effect on gun violence, for the reasons mentioned above. It was opposed by the ACLU as well as groups advocating for the mentally ill, and rightly so. It was as bad an idea as the idea to turn the appalling no-fly list into a no-guns list.

The Republican vote is a much easier read — three paragraphs. You can find it as H.J.Res 40. It simply says that the SSA rule shall not take effect, as of 2017-02-28. That’s before the Obama rule’s mandatory compliance date.

“Reason” magazine and some other right-wingers are trying to claim that in fact, Republicans and/or Trump did not vote to make it easier for the mentally ill to buy guns.

Let me get some more nit-picking out of the way:

However, that nit-picking aside, and no matter how bad the original Obama rule might have been, it remains true that Republicans did vote to make it easier for those 75,000 affected mentally ill people who would have been covered by the Obama rule, to buy guns.

The Snopes article reaches the same conclusion. So the “Reason” article is a classic example of the headline claiming something which is not supported by the actual article.

A lot of text to make a very small point, right? If we’re talking tragic mental afflictions, the urge to point out bullshit must be one of the worst.

One final point: If you want to make pro- or anti- gun arguments online, start by watching Jim Jefferies’ standup routine on the subject. If your point has already been decisively mocked by an Australian comedian, maybe consider not making it.