On 2nd April 1865, Jefferson Davis and Confederate troops fled Richmond, Virginia and fled south, abandoning what had been the capital of the Confederate states.

As they left, troops were ordered to set fire to bridges, the armory, warehouses and other supplies. The New York Times reported:

The evacuation of Richmond commenced in earnest Sunday night, closed at daylight on Monday morning with a terrific conflagration, which, was kindled by the Confederate authorities wantonly and recklessly applying the torch to Shockoe warehouse and other buildings in which was stored a large quantity of tobacco. The fire spread rapidly, and it was some time before the Fire Brigade could be gotten to work. A fresh breeze was blowing from the south, and the fire swept over great space in an incredible short space of time. By noon the flames had transformed into a desert waste that portion of the city bounded between Seventh and Fifteenth streets, from Main-street to the river, comprising the main business portion. We can form no estimate at this moment of the number of houses destroyed, but public and private they will certainly number six or eight hundred.

A photograph was taken of the aftermath of the fire: 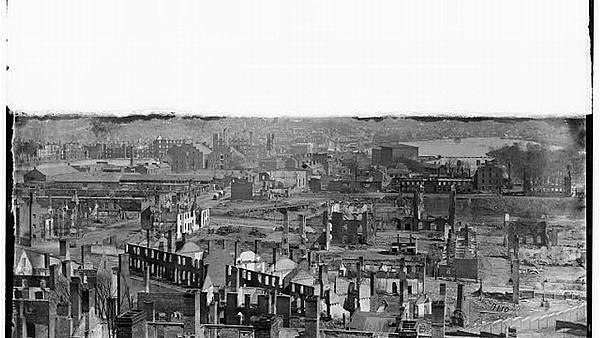