On 3 April 1865, Johnston Livingston de Peyster raised the US flag over Virginia following its capture from Confederate forces. He later wrote to his mother:

My dearest mother,— This morning, about four o’clock, I was got up, just one hour after I retired, with the information that at six we were going to Richmond. At six we started. The rebs. had gone at three, along a road strewn with all the munitions of war. Richmond was reached, but the barbarous South had consigned it to flames. The roar of the bursting shells was terrific.

Arriving at the capitol, I sprang from my horse, first unbuckling the stars and stripes, a large flag I had on the front of my saddle. With Captain Langdon, chief of artillery, I rushed up to the roof. Together we hoisted the first large flag over Richmond, and on the peak of the roof drank to its success. 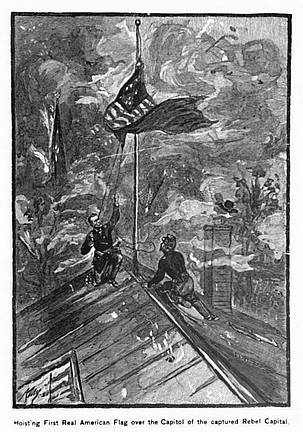