How to explain NECCO wafers to a European?

Back in the 1800s, Union soldiers fighting in the Civil War used to carry “hub wafers”, a cheap and durable candy substitute manufactured in Boston, a city which Oliver Wendell Holmes had nicknamed “The Hub of the Universe”. In 1901, the company making hub wafers became the New England Confectionery Company — NECCO® — and the wafers were rebranded accordingly.

During the Great Depression, NECCO Wafers were one of the candies cheap enough that pretty much anyone could afford to buy them as a treat. They didn’t need expensive refrigeration to keep their taste, they’d basically be the same if you shipped them across the country by steam train then left them on a shelf for a year.

During World War II, the US army again needed something vaguely like candy which was robust enough to survive the rigors of extended ground warfare, and NECCO Wafers became part of US soldiers’ rations.

So it was that NECCO became a nostalgia candy, unchanged for a hundred years, something grandparents could give their kids in order to prove that things were tougher and more authentic in the old days.

Once I moved to Cambridge, Massachusetts in the late 1990s, I’d occasionally find myself walking past the NECCO wafer factory with its jolly striped water tower. The candy was ubiquitous in local stores, so inevitably I decided to try it.

Imagine a large Alka-Seltzer antacid tablet, about 2cm in diameter. Take away the fizz, and make it harder to chew. Give it a faint powdery coating and a hint of color. Finally, imbue it which the sort of artificial fruit flavor you normally find in cough syrup. That’s what a fruit NECCO wafer is like. The “chocolate” ones are even worse.

By the 2000s, Americans had started to realize that nobody under the age of 40 wanted anything to do with NECCO wafers. In 2009 they changed the ingredients — gone were the chemical flavorings and colorings, replaced with natural ingredients that tasted a bit like fruit. They even added glycerine to make the texture a little less like drywall, and put some cocoa flavor in the “chocolate” candies. Fans were outraged, and after two years the company switched back to the Civil War era formula.

Still, the company wasn’t done trying to expand its market, and in 2012 they launched tropical flavor NECCO wafers and sour NECCO wafers. Then in April of this year, they went bankrupt. For a while people were panic-buying NECCO wafers to hoard, presumably reasoning that they’d be the only candy likely to survive a pre-emptive nuclear strike by North Korea. Don’t worry, though — a few days ago NECCO was purchased from bankruptcy. 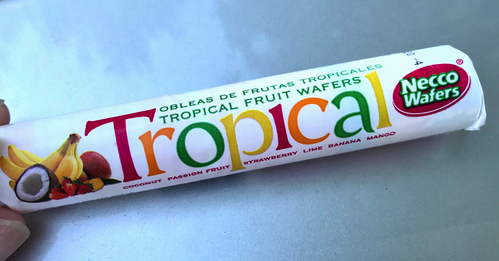 Anyhow, all of that is by way of introduction to the fact that on Sunday, I saw some tropical fruit NECCO wafers on sale. I decided to taste test them. While I never intend to taste “classic” NECCO wafers again voluntarily, the tropical flavors aren’t bad. The mango is pretty feisty, and even has a certain nose to it. If the idea of chewing on a hardened coconut flavored antacid appeals to you, definitely give ‘em a try.