I’m generally skeptical about health gadgets, even more than I am about gym membership. Call me a cynic, but I don’t think sauna pants are going to get you slim just by wearing them for an hour a day, or that the thigh toner is going to melt the fat off your ass. Even if the device works, we’ve all been to someone’s house and seen the exercise bike that’s been converted into a coat rack. So I probably wouldn’t have looked at gadgets at all, if work hadn’t encouraged it. Like most people in the US, I get my healthcare through insurance paid for by my employer. Since people tend to work for IBM for decades, the company has a particular interest in persuading employees to look after their long term health. Routine checkups have zero copay, so that there’s as little incentive as possible to skip them. There are also various optional health programs to participate in; this year, one of the options was to get a free Fitbit. All I had to do was agree to connect my account to the corporate wellness site. I’d be able to earn points for meeting exercise goals, and then later in the year I would be able to spend the points to get gift certificates and other goodies.

I thought about it, and decided to go for it. Yes, it meant that Big Blue might know how idle I was, but I figured that might just be what I needed to keep me exercising. I’d been curious about Fitbit anyway, and this was a chance to try it for free.

I should emphasize that with Fitbit, your data is kept totally private by default. You can add friends to compare progress, but even then by default they only see how many steps you’re taking per day — nobody sees your logged weight or what you’re eating. Firstly, our house has two floors and is on a hill. The Fitbit One has an altimeter, so it can measure how many flights of stairs you climb and how many hills you climb, and give you credit for that.

Secondly, I wanted to try the sleep tracking, and the Fitbit One slips into a soft fabric wristband. I decided that would be more comfortable than the rubberized plastic band of the Flex, particularly on hot sticky Texas nights.

Thirdly, the Fitbit One works fine in the pocket of your jeans; you don’t need to have it visible on your wrist the whole time.

It’s also handy to have a display on the device, so you can check your stats without needing to sync with your phone or computer.

Yes, it’s a glorified pedometer. I already had a regular pedometer, but it had ended up in a drawer collecting dust. Somehow the continuous tracking and automatic logging of the Fitbit makes all the difference. 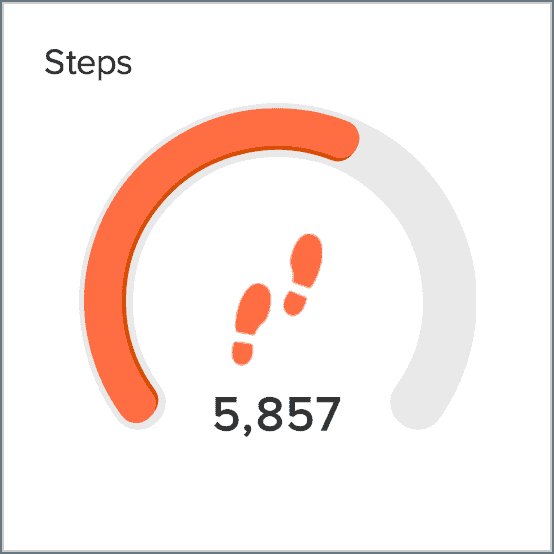 Because I’m being tracked the whole time, I’m motivated to be more active whenever I see an opportunity — whether it’s parking a couple of blocks from my destination and walking the rest of the way, or getting up and pacing and doing knee raises while I’m listening to a long conference call.

I think it’s like backing up your computer. Sure, everyone knows they should, but if they have to plan it and do it, it never happens. (And that’s why my web site gets backed up automatically every night, without my having to do anything.)

In previous years I’ve tried exercising regularly, but it’s been planned, something on my calendar that I have to do and then record that I’ve done. It was a thrice-weekly chore that I quickly lost interest in. With the Fitbit, I’ve found myself determined to hit my activity target every day, without exception — and I’ve been doing so.

The sleep tracking also proved surprisingly useful. This year has been terrible for my allergies. I’d often have vague memories of waking up repeatedly, but with an actual graph I could see the difference between a good night and a bad night much more clearly. By comparing my sleep logs after different doses of a couple of different antihistamines taken at different times of day, I was able to work out the most effective route to a good night’s sleep.

Once I saw that the Fitbit One was working for me, I decided to spend the money it would have cost me, if I hadn’t been given it by my employer. I bought the Fitbit Aria scale. I admit, the scale is definitely harder to justify as a purchase. It’s pricier than the trackers, and it’s not really going to motivate you to exercise. It’s also a pain to set up — it makes some questionable assumptions about your home network, and it took me some fiddling around with laptop DNS settings to get the thing configured.

Once it’s set up, though, it works like a dream. Every morning I get up and step on it, and it measures my weight. It’s very accurate — far better than the cheap mechanical scale we had before. It also uses electrical conductivity to estimate my body fat percentage. Everything is logged automatically, so once I’m downstairs and the morning coffee has kicked in I can pull up my data via the app on my phone or the Fitbit web site and look at how I’m doing.

Again, by default all the data is completely private. I guess theoretically the NSA might snoop on my data, but as sensitive information goes, I don’t consider my weight to be a big deal, so I don’t mind having my data in the cloud.

As with the activity tracking, the accuracy and the automation are key. Seeing myself steadily losing a little weight every day was a fantastic motivator. And now that I’m at my target weight, the lack of effort required means that I’ll carry on logging my weight every day, and will hopefully catch any future weight gain trend before it becomes a problem.

That said, you can get accurate scales with fat estimation features for half the price of the Aria, so it really comes down to whether you have the extra $50 to spend and like the idea of a scale that will automatically log your data to your phone and to a web site.

If you have the money for a Fitbit, I’d definitely recommend it. The Aria scale, perhaps not so much, particularly not if your existing scale is accurate. It’s more of a “nice to have” device.

I ended up buying a second Fitbit for my wife, so the company’s promotion really worked out well for them as well as for me.