I bought a new keyboard for my work computer. Let me tell you about it.

There are a lot of “ergonomic” keyboards out there. They tend to have fancy shapes:

However, over the decades I’ve come to the conclusion that the precise shape of the keyboard is relatively unimportant. What’s absolutely critical is the feel of the keys.

The “free” keyboard you get with a generic PC these days is usually a full-travel membrane keyboard. The keys push down on a flexible membrane, which touches another layer underneath, completing a circuit. A rubber or silicone dome is inserted between the key and the membrane to provide some “feel”; as you push down, initially the dome deforms slightly, then at some point it “pops” and the membrane is touched, making contact and registering the keypress. The rubber then cushions the key against further pushing.

The first step up from a plain rubber dome membrane keyboard is the scissor switch mechanism. Lenovo used to use scissor switches in their ThinkPad laptops. The scissor mechanism gives the keys a more guided and precise feel as they are depressed, and reduces how far you have to press them to register a keystroke.

For a while I had a Kensington Slim Type scissor switch keyboard which I found very comfortable. Unfortunately, the labels on the keys started to wear off: 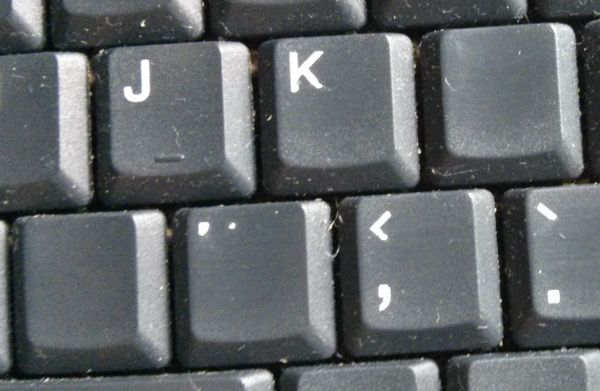 I’m a touch typist, but still, this was aesthetically annoying. So next I bought a keyboard from their competitors at Logitech, the redundantly named Logitech Ultrathin Illuminated Keyboard with Backlighting. This felt a bit nicer than the Kensington, and the illuminated keys were attractive and occasionally useful.

Whereas the Kensington had the symbols marked on the keys with ink, the Logitech proudly featured laser-etched keys: the symbols were cut into the keys with lasers, apparently. It’s commonly believed that this means they don’t wear out. 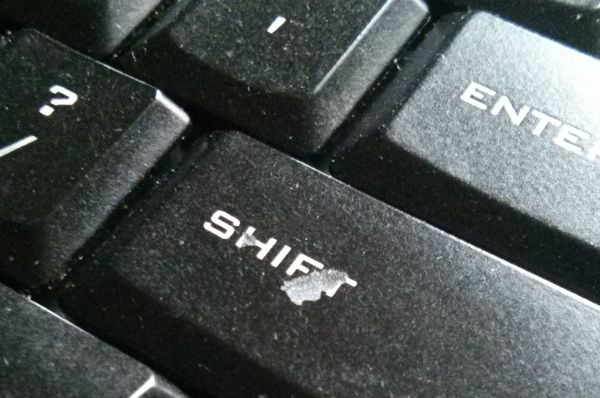 Commonly and falsely believed. When my right shift key lost a chunk of its engraved markings, I threw a hissy fit and went back to an IBM Model M. 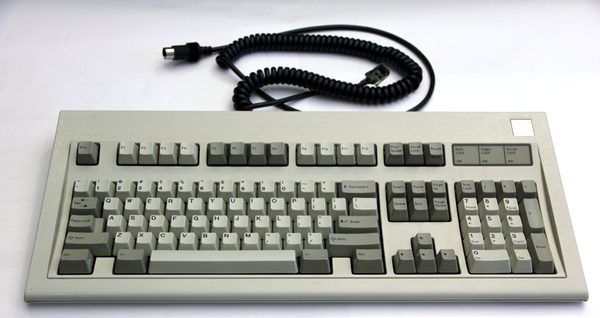 The Model M uses buckling spring keys. There’s no rubber to wear out; when you push the key, you get high resistance from the metal spring inside, and then suddenly there’s a click as the spring buckles. With a buckling spring mechanism, an experienced typist never needs to “bottom out” and push the key until it hits the end of its range of travel. This is important because when you’re typing on a keyboard, you want to avoid physical stress to your fingers, joints, muscles and tendons. The “clicky” feel of the buckling spring means that you can type more gently, because you can feel with certainty when the keystroke has registered.

The Model M is legendary for its build quality. There are plenty of Model Ms from the 1980s that are still in perfect working order. The key labels aren’t merely printed on the top; they are etched into the material of the keys using dye sublimation, so they don’t wear off even after decades of use. Vintage Apple keyboards are labeled the same way.

My Model M was made in 1997 in Scotland, a year or so before production was shut down. I got it from a fellow IBM employee who was throwing it out because it was big and noisy. It certainly is both of those things. You can get entire laptop computers that are smaller than a Model M, and when I typed on it you could hear the noise at the other end of the house. During conference calls I’d have to go on mute if I wanted to take notes.

None of those issues were deal-breakers, though; I’ve got a nice big desk, and when I’m on a group call I have to stay on mute most of the time anyway so that my parakeets don’t get to participate. The keyboard noise was clearly audible to me over any reasonable level of ambient music, but my brain had learned to tune it out.

What was more of a problem was that the Model M used a PS/2 connector, and around 2010 Lenovo had started shipping “legacy-free” laptops with no PS/2 connector. So I got a PS/2 to USB adaptor, and connected the keyboard via that. So the keyboard scan codes were turned into PS/2 signals, which were turned into USB HID messages, which were sent to the Linux kernel, which turned them back into keyboard scan codes and passed them to X, which turned them into keystrokes and sent them to my applications. It all kinda sorta worked, mostly, except that every now and again some random combination of keystrokes would mysteriously turn into a completely different combination of keystrokes.

The worst was if I hit Shift and Insert with the wrong timing, which for some reason seemed to make the USB converter send an infinite number of Print Screen keystrokes to X. Hundreds of KDE snapshot utility windows would start appearing on the screen. Sometimes I’d have to go and find another machine and SSH in and kill them all in order to regain control of the computer. Eventually I ended up disabling ksnapshot. Still, other random glitchy behavior surfaced a few times a week.

I considered getting a different USB adaptor, but looking for a USB keyboard adaptor with guaranteed Linux support proved pretty fruitless. Unicomp make and sell Model M keyboards with USB connectors, but it wasn’t as if I actually wanted something as big as a Model M hogging my desk. I just wanted a keyboard with a good mechanism that wouldn’t wear out in a year or two.

There are a number of different color-coded varieties of Cherry MX switch, each with slightly different mechanical characteristics. I decided I wanted something which had the “clicky” feel of a buckling spring, but which would require as little force as possible to push the keys and be as quiet as possible. That meant Cherry MX brown switches.

I also decided I wanted a tenkeyless keyboard. I never use the numeric keypad, so it’s just a waste of desk space. I did, however, want a proper Esc key in the right place for vi, and the Home/End/PgUp/PgDown cluster. I began searching online for tenkeyless keyboards.

I almost bought a Cooler Master CM Storm QuickFire Stealth keyboard. While I am a touch typist, I’m still a little wary of keyboards which have no markings on whatsoever. Having hidden markings on the front of the keys seemed like a good solution — no markings to wear off on the top, and I’d still be able to look at the labels if I really needed to.

But then I found something better: the new Max Blackbird keyboard. What makes this different from the other fancy mechanical keyboards on the market is that it has the holy grail of keycap manufacture: double-shot injection molding. Each key is really like two keycaps, one on top of the other. The inner keycap has the symbol on top, raised up from the surface; the outer keycap is then molded around that. 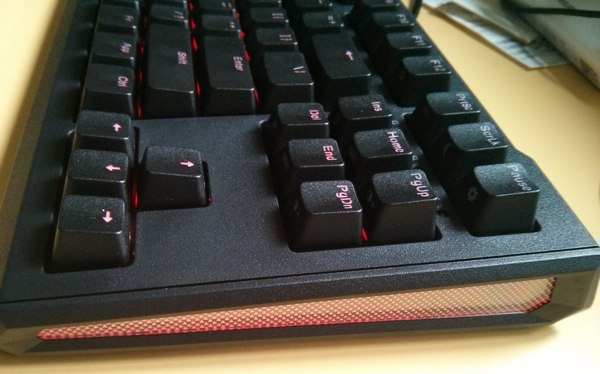 If I had to pick the keyboard which it most feels like, I’d say that from a tactile point of view it’s like the Apple Extended Keyboard II, another legendary keyboard. The sound is slightly softer and deeper than I remember the Extended II being.

If you’re into gaming, you can disable the “Windows” key (which has a Max logo on it). There are various LED modes, including a programmable mode where you can decide exactly which keys you want illuminated, and a pulsing mode for showing off.

It has no Windows logo anywhere on it, and it works perfectly with Linux. The multimedia keys and application menu key just work. Build quality is good; it’s heavy, and feels solid. Weight plus rubber feet means it doesn’t slide around at all on my desk. The USB cable is the thick braided type, the connector is gold plated. 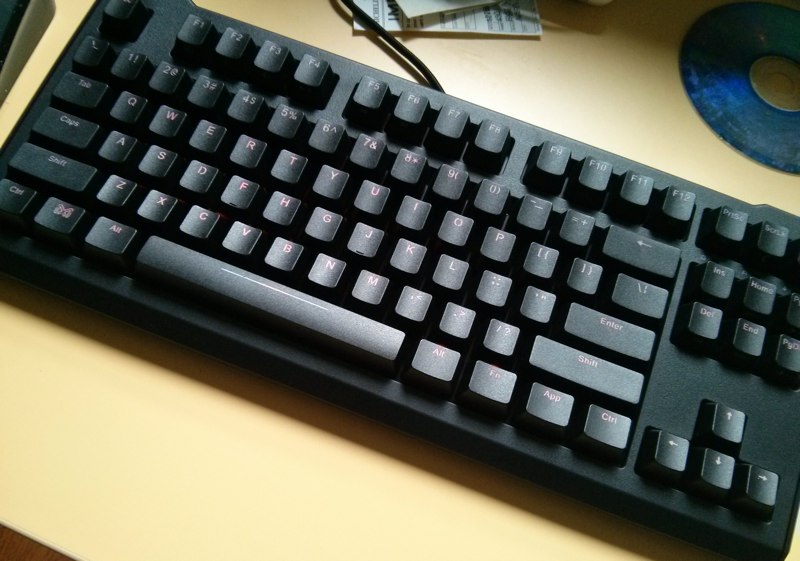 In short, someone has really paid attention to every detail. Assuming it keeps working — and I’ve no reason to think that it won’t — this is pretty much my perfect keyboard.