I think I was about 10 years old when I decided I wanted to visit Colorado. I had read about a city called Boulder, where you could spend a warm and sunny morning in town and then drive an hour or so and be on a snow-covered mountain. I had never experienced an actual mountain, and that sounded like a good way to do it.

In the mean time, I’ve had 15 years of South Park to mould my perceptions of Colorado. In retrospect, it maybe wasn’t the best idea to watch two entire seasons of the show right before the vacation? But on that note, I might as start by mentioning things we didn’t do.

We also didn’t go to Casa Bonita. I have an aversion to queuing, and an even bigger aversion to wasting food, so the prospect of lining up for an hour to pay $14 for inedible processed “cheese” enchiladas was about as appealing to me as a root canal.

What we did do was see a lot of art, eat good food, and experience mountains. We started off in Denver — population now 650,000 or so, altitude 1,609 meters. 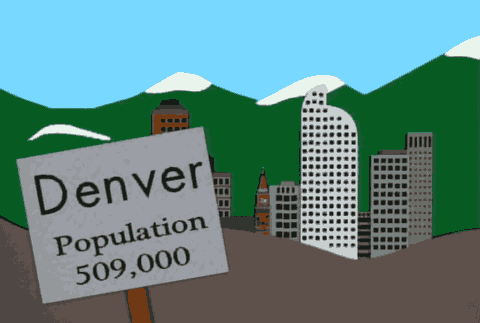 In 1988 the people of Denver voted for a tax increase: 75% of them approved the creation of a “Scientific And Cultural Facilities District”, to be funded by a tax of 0.1% added to retail sales tax in Denver. This scheme was reauthorized in 1994, and again in 2004. As a result, downtown Denver has a number of high quality museums, as well as a zoo and extensive botanical gardens. 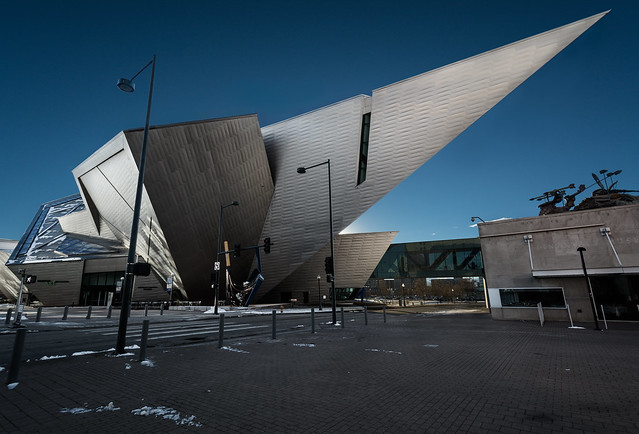 The Denver Art Museum inhabits a pointy metal building that looks like it fell out of an episode of Buck Rogers in the 25th Century. We toured the Modern and Contemporary Art collection, because that’s what interests us most. I’m not sure about my wife’s reasoning, but to me it seems as though the invention of photography rendered most western art prior to the 20th Century obsolete, freeing artists to go beyond literal photorealism and find something far more interesting and meaningful. Yes, John Constable could paint a really nice picture of Salisbury Cathedral that looks almost as if a camera made it, but we needed Pablo Picasso and Max Ernst to express the horrors of the 20th Century. 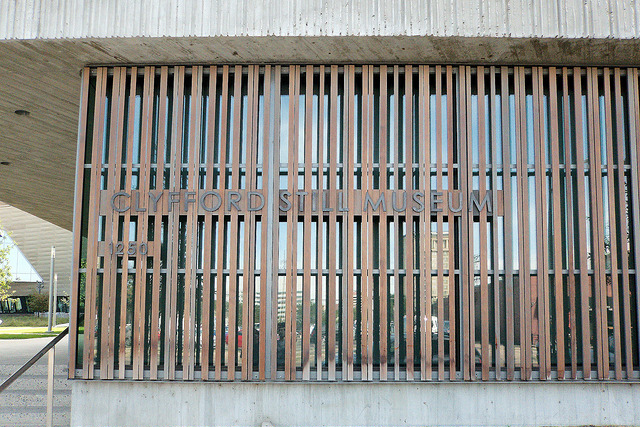 Denver also has an entire museum devoted to the work of Clyfford Still, an uncompromising artist who was one of the key figures in the abstract expressionist movement. Robert Motherwell once said “Still was the most original, a bolt out of the blue”, while Jackson Pollock said “Clyfford Still makes the rest of us look academic.” But in the 1950s, Still had a legendary falling out with Mark Rothko, accusing Rothko of being a bourgeois sellout. Still cut all ties with the commercial art world, moving from New York to a farm in Maryland, and becoming almost reclusive. Over the remainder of his career he gave or loaned his own choice of his works to museums and exhibitions, always insisting on rigorous contracts prohibiting their commercial exploitation through further loans or reproductions. When he died, he still owned over 90% of his work, and left it all in his estate to any “American city that will agree to build or assign and maintain permanent quarters exclusively for these works of art … with the explicit requirement that none … will be sold, given, or exchanged.” The museum was also to have no auditorium, no restaurant or café, and no gift shop; just art. All Clyfford Still’s art, in one place. And Denver is that place.

It’s tempting to see Clyfford Still as a control freak, yet at the same time he was adamant that the meaning of his work was what the viewer got out of it, and not what he had intended. “People should look at the work itself and determine its meaning to them,” as he put it. So I see him not so much as autocratic, but as an artist who was genuinely disgusted by the commercial exploitation and degradation of art, and simply wished to make sure he had no part in it. (He described the New York Museum of Modern Art as “the Great Gas Chamber of culture on 53rd Street”.)

What Still clearly wanted was for all his art to be preserved in one place, not split up into private collections belonging to the ultra-rich. He wanted any ordinary person to be able to see all of his work in its proper context. If that’s artistic arrogance, I think we could use more of it. And sure, he was acerbic and difficult to get on with, but that’s not exactly unusual for a great artist.

And his paintings are incredible. Most are massive fields of color, the surfaces thick and textured in a way you can’t possibly appreciate in a photograph (though here’s an article which has some tiny photos). The textures often resemble natural world textures like rusted metal, wood, rock formations, or soil, emphasizing the organic forms in the paintings; sometimes the colors shift depending on your angle of view.

Still’s break into pure abstraction came around 1944. One of his paintings from that year is a field of black slashed with two jagged blood red scars; a form resembling an abstracted human figure stands next to what appears to be a rip in the blackness, behind which there’s a dawnlike orange glow — or is it fire? Bottom right a second form suggests something demonic. While Still said that he didn’t consider black to be a cold or negative color, the painting struck me as profoundly angry and violent; just thinking about it makes me feel tearful. And even in his later years when he “mellowed”, Still produced paintings which I found brought to mind disasters like forest fires or volcanic eruptions. If there was any sense of hope amidst the malevolence, it was from the birdlike or angelic abstractions which seemed to be leaping into the sky in escape.

So if you’re passing through Denver and have any interest in 20th Century art, you owe it to yourself to visit the Clyfford Still museum. 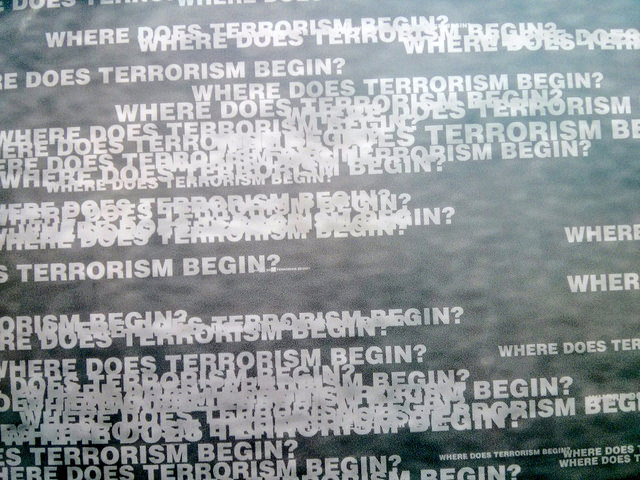 A different kind of disturbing exhibit is featured nearby at the CELL, or Counterterrorism Education Learning Lab. “Where does terrorism begin?” asks the exterior decor repeatedly. All too often with American bombing or drone strikes, I’d say, but I suspect that’s not the answer they present inside. We didn’t go in, but the CELL “is an entity of the Mizel Institute”, the non-profit foundation run by Larry Mizel, a member of the board of directors of the American Israel Public Affairs Committee (AIPAC), so I think I can take a guess at the broad outlines of their position. They’re having a little soirée on September 11th where guests can meet ex-CIA director and Iraq war general David Petraeus and admire the center’s collection of WTC artifacts. Tickets are sold out, but if you want the kids to have an education, the CELL has a partnership with the Boy Scouts of America where your offspring can learn how to spot a terrorist.