In the wake of Facebook’s recent behavior, I see people once again saying they wish there was an alternative.

Well, there is. There’s a social network with 4.7 million users that’s free and open and not controlled by any single company. I’m going to tell you how to join it.

In case you have missed the major news stories about Facebook’s misdeeds, Facebook has…

…continued to promote posts it knows are “bad for the world”, because it increases engagement.

…allowed another right-wing site PragerU to publish false information about climate change without getting fact checked.

…announced that it will promote Breitbart as a trusted news source.

…been criticized by the UN for allowing incitement of genocide in Myanmar.

…obstructed investigation of the genocide it incited.

…donated to Steve Scalise, who described himself as “David Duke without the baggage”, and other far right politicians.

…allowed the spread of dangerous misinformation about diabetes.

…brought in The Daily Caller to fact-check articles.

…lied outrageously about how many people were watching their video channels, causing many independent publications to pivot to a largely nonexistent video audience.

…algorithmically marked children as interested in gambling and alcohol.

…allowed Australian politicians to lie throughout their 2019 elections.

…taken in $1.6 million from anti-LGBT and anti-Muslim hate groups.

…been found guilty of allowing employers to target job ads so that women and older workers wouldn’t see them.

…been caught lying about when they knew Cambridge Analytica was abusing user data, and tried to obscure the fact that they sold data to the company.

…used data from Facebook apps to track users the company considers a threat.

…allowed Trump to run over 2,000 ads comparing immigration to an “invasion”.

…refused to delete a doctored video of Nancy Pelosi.

…tweaked their algorithm to increase engagement, boosting Fox News to the top.

…blocked people of color from talking about racism.

…paid teenagers to install VPN software that spied on them.

…blocked transparency tools designed to monitor what ads are being shown to users on Facebook.

In addition, Mark Zuckerberg has hosted a series of dinner parties with far right pundits, and not invited any left wingers. In leaked audio, he said that he considers Elizabeth Warren an existential threat to Facebook.

And all of that is only the stories I encountered in 2019.

So what’s the alternative?

There are dozens of interconnected social network servers running right now. They’re federated. Instead of a single company like Facebook owning and controlling the entire network, anyone can set up their own server, and the servers all talk to each other. The system is known as the Fediverse.

Think about how e-mail works. You might use Apple Mail on your iPhone to connect to the mail account from your ISP, Time Warner. Your friend might use Gmail in a web browser and Google’s servers. Perhaps your dad still uses a Yahoo! web mail account. Millions of companies have Microsoft Exchange mail servers, and access mail using Outlook. 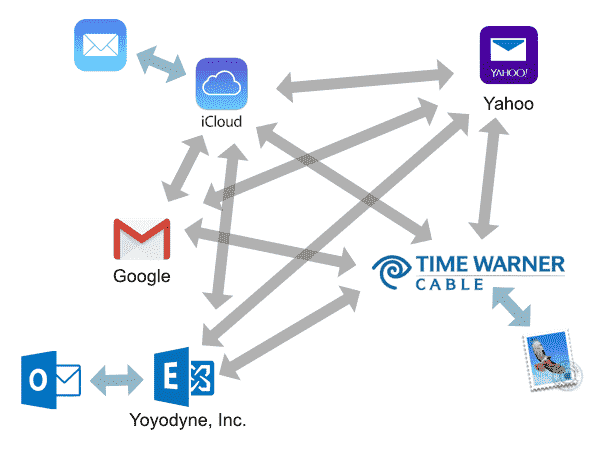 So there are many places you can get an e-mail account, and many different interfaces to e-mail, yet all these different systems are able to talk to each other.

The Fediverse is like that, but for social network posts and replies.

Because anyone can set up a server, you can choose a server whose policies reflect your values. You can also switch server without losing contact with your friends. There’s no corporate censorship team, and there’s no algorithm messing with your feed of updates from your friends. If they post it, you’ll see it, in chronological order. And of course, there are no ads.

Sound good? Read on to find out how to get started.

Because there are multiple different pieces of software that make up the Fediverse, the first thing you need to do is decide what kind of social network experience you want, and pick software accordingly. It’s like picking whether to use Apple Mail, Exchange, Thunderbird, or web mail.

The good news is, I’ve basically tried all the open social network software, so I can make some recommendations.

If you want something that looks like Facebook, your best option is Friendica. The second best option is Diaspora, but some people have told me that Diaspora confuses them.

One reason I like Friendica is that it has a feature to let you set an expiry time on your posts — you can have everything automatically delete itself after a certain number of days. It also has events, photos and videos sections like Facebook; Diaspora currently lacks those.

If you want something that looks like Twitter, the best options are Mastodon and Pleroma. Pleroma has a simpler default layout; Mastodon uses more columns.

Since this is about leaving Facebook, for the rest of the article I’m going to assume you’re picking Friendica or Diaspora.

Once you’ve picked your software, you need to pick a service provider. This is like deciding whether to get your e-mail from Microsoft, Google, Apple, your ISP, fastmail, or whoever.

As mentioned before, you can always change your mind later and not lose track of all your friends, so don’t feel like you have to agonize over the decision.

There is one warning I feel obliged to give you: One of the biggest Mastodon instances is Gab, which offers a safe haven to neo-Nazis, white nationalists, and other right wing extremists. It has been blocked by many other Fediverse servers, so if you sign up for Gab you will likely have trouble interacting with non-Gab users. Of course, if you are a Nazi, you’ll want to head over to Gab and sign right up.

The web site fediverse.party can help you to find a server. Click on the software you’ve chosen, and you’ll get a page of information about the software. Scroll down to the Join The Network section and there are links to lists of servers, and a button to bring up a “wizard” to help you choose a server.

For Friendica, you might want to check out the official list of servers. For Diaspora, try the Pod Uptime site.

Once you’ve got an account, you’ll want to tell all your friends how to find you.

Because the Fediverse is like e-mail, addresses have two parts — user@example.com, not just a username.

In Friendica, you can find your Fediverse address by going to your profile page. Click on your profile icon, and in the drop-down menu choose Profile.

On the left hand side of your profile page, you’ll see your user icon, and your Fediverse address underneath.

In Diaspora, the procedure is the same — click on your user icon to get the menu at top right, choose Profile.

Your Fediverse address will be in the main column, after your name, in gray.

When your friends give you their Fediverse addresses, you can add them.

On Friendica, you can either use the same top right menu and select the entry Contacts; or you can click the icon of people on the top row of the page.

On the contacts page itself, there’s a box on the left site labeled Add New Contact. Paste your friend’s address in there and click the Connect button.

In Diaspora, click the same top right menu and choose Contacts. Above your list of contacts, on the right side of the page, is the contact search box. Paste their address into there and hit return, and Diaspora will guide you through adding them as a contact.

You are now on the Fediverse. There’s a lot more to learn, but at this point you should be able to post updates and have your friends reply to them.

My friends aren’t on the Fediverse.

So invite them. Or make new friends.

Of course not. I’m just suggesting that perhaps you should post your own updates on the Fediverse, and only go to Facebook as a last resort. Maybe post a link to your Fediverse profile on Facebook periodically to remind people where they can go to read your updates.

Please consult the list of reasons at the top of the article. Your continued use of Facebook will be taken by Zuckerberg as consent for everything he’s doing.

If you care about democracy, no longer providing all your content to Facebook for free is about the easiest, least painful thing you can do. It’s literally free, you can do it while sitting at your computer, and it can actually have an impact.

This Fediverse software is too complicated.

Facebook’s settings area is a complicated rat maze of confusing things to tweak in comparison. You weren’t born knowing how to use Facebook groups, pages, friend groups and status updates either, you had to learn. I’m sure you can still learn.

If we all leave Facebook it’ll just turn into a bubble of far right propaganda.

Good. Nobody will be fooled into thinking they’re getting balanced news, and Facebook’s position will be indefensible if we ever get another Democratic government.

What about free speech?

Facebook is already censoring, I’m just pointing out that they’re doing so with a particular agenda, and making bad choices.

You’re just trying to censor anyone you disagree with.

Not at all. I’ve no problem with the Wall Street Journal being considered a trusted news source, for example. My issue is with publications that publish lies, conspiracy theories, trolling and propaganda as if those things were news. And if you like those things, go sign up on Gab like I suggested.