Once upon a time there was a talented Irish comedy writer named Graham Linehan. He wrote for acclaimed comedy shows including Harry Enfield and Chums and The Day Today. For The Fast Show he co-created the characters of Ted and Ralph, an impoverished closeted gay English aristocrat and his Irish estate worker. The characters were carefully observed and affectionately and positively portrayed. Linehan also wrote for Brass Eye, a satirical show which, among other topics, took aim at homophobia and media hysteria over pedophilia.

In 1995 Linehan started to become famous, as the co-creator of Father Ted, a surreal comedy about three misfit Catholic priests on a remote island off the cost of Ireland. The series was universally loved, and eventually ranked second in a list of greatest British sitcoms (after Fawlty Towers). Although Linehan is an atheist, the priestly characters in the show were carefully and affectionately observed. Sadly, actor Dermot Morgan, who played Father Ted, died of a heart attack the day after series 3 finished filming.

Next, Linehan created a series of his own: The IT Crowd. It followed the day-to-day adventures of two IT support guys and their tech-clueless female manager, shut in the basement at a large corporation. While it never became as beloved as Father Ted, it was a cult hit. People who worked with computers were drawn in by the authenticity and attention to character detail.

Then came an unfortunate incident that changed the trajectory of his life.

In December 2008, The IT Crowd episode “The Speech” first aired. The main plot arc has IT guys Moss and Roy pranking manager Jen by building a box with a switch, that they convince her is the Internet. But in the secondary plot arc, psychotic corporate CEO Douglas Reynholm falls for April, a female reporter who is writing a profile of him. Spoiler alert: She’s transgender. She comes out to him before they start dating, but he mis-hears her. They proceed to start a whirlwind romance, the joke being that she still enjoys a lot of stereotypically male things like drinking beer and playing darts, and so for once Reynholm is able to get past his misogyny (seen in other episodes) and actually date someone as something other than just a sex object. However, towards the end of the episode he learns that he misheard her, and breaks off the relationship. She confronts him at work, and they fight, in what Linehan intended as a parody of the Bourne movies’ fight scenes (Reynholm having mentioned earlier that he thinks “The Bourne Identity” is a movie that describes what he’s like). April is thrown through a window, and literally thrown into the main plot arc.

Now, I don’t believe Linehan’s intention at this point was transphobic. Reynholm is consistently a psychopath throughout the series, and the satirical point in this episode is about his misogyny, and that his homophobia and transphobia ruin his happiness. The fight was wedged into the plot to poke fun at a movie, and the resolution is cartoonish violence. Throughout the episode, April is portrayed positively, including her disclosing her status to Reynholm before they start dating.

But, looking at it from the other side, the joke relies on the idea that April is not performatively female; that is, she looks like a woman, but she behaves like a man. (Or rather, she behaves like a sitcom man, because sitcoms are a world where women don’t like to eat pizza, drink beer or play darts.) That’s a problematic portrayal. It’s also unfortunate that the episode aired shortly after the Transgender Day of Remembrance. So a lot of people viewed the plot as incredibly transphobic. Maybe you do, maybe it is, I’m not here to argue that point; my concern is with what happened next.

People started to describe the episode as problematic or worse, and attack Linehan on the Internet for the transphobia and implicit misogyny. This was unfortunate, as it soon became clear that Linehan was extremely thin-skinned about even the mildest criticism.

Nevertheless, Linehan started to get heavily into Twitter, and was active in the opposition to the misogynistic trolls of “Gamergate”. But the criticism of that IT Crowd episode kept coming, and in 2013 he started responding online. He started getting more frequently involved in other random battles, including a spat where someone compared a Giles Coren article to a mumsnet blog post.

So The IT Crowd spread slowly across the world, as cult TV tends to do, and Linehan became more of a Twitter celebrity. The criticism over that unfortunate episode became more pointed, and it seems that Linehan gradually went through some motivated reasoning, something like this:

He started to get involved in more arguments about trans rights and representation, such as an incident where an issue of National Geographic came in for heavy criticism. And he found a group of people who were eager to support him: so-called Trans-Exclusionary Radical Feminists, or TERFs, who for some reason are particularly prevalent in the UK, including on mumsnet, which Linehan had apparently started reading regularly. 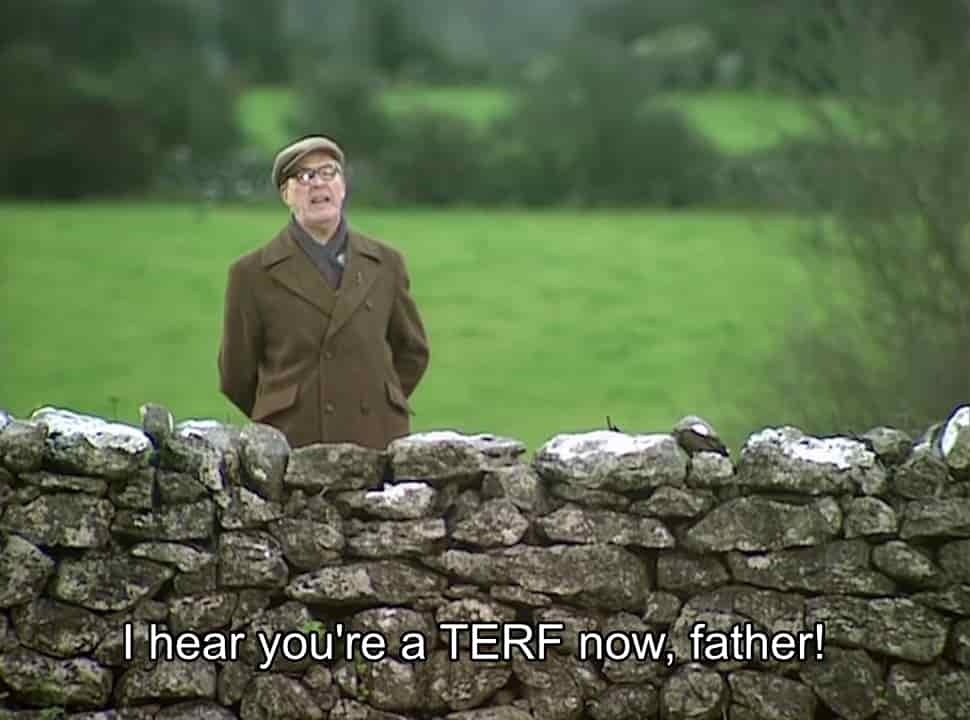 By 2018 Linehan had started posting links to anti-trans YouTube opinion videos as “proof” that he was correct. His harassment and doxxing of a transgender activist was bad enough that he was given an official police warning.

By 2019 he was vocally supporting Magdalen Berns, a self-described Internet transphobe also followed by JK Rowling. He started campaigning — on mumsnet — to prevent a trans charity from receiving lottery money.

Linehan next began advancing the theory that trans women were just men looking for an excuse to sneak into women’s toilets, and that the transgender rights movement was all about “grooming” children — that is, that transgender people were secret pedophiles. People started trying to deplatform him over his extremism and hate. He started his own social network, Glindr, a Fediverse instance, apparently expecting that he might get thrown off of Twitter. He decorated it with a cartoon of himself as a knight in shining armor riding into battle.

In 2020 Linehan upped the ante again, deciding to compare doctors who treat trans kids to Nazi doctors experimenting on people in concentration camps. He defended JK Rowling’s transphobia, and told women they weren’t doing feminism properly. He wrote an opinion piece for the Daily Mail, describing his pariah status and how he was losing all his friends. He began trying to drag other comedians and celebrities into his battles, including Josie Long, Billy Bragg and Frankie Boyle, by mentioning them in his Twitter rants. His relatives started distancing themselves from his views. He decided that actually, “Gamergate” made a lot of valid points. He claimed that the idea of gender as something distinct from biological sex was a “form of societal grooming”, rather than scientific fact. Having rejected the idea of gender entirely, I saw him expand his claims to encompass the idea that the entire LGBT community was a “grooming” operation.

And then on Friday, Linehan’s Twitter account was finally permanently suspended for repeatedly breaching the platform’s rules on hateful conduct and for using sock-puppet accounts. He has posted on mumsnet asking for support in this difficult time.

It’s a common story: A smart but sensitive man finds his way onto a social network that monetizes outrage. He starts spending too much time there, getting involved in lengthy feuds. He accidentally makes a few enemies, and falls into the classic mental trap of motivated reasoning. He finds a group who welcome him with open arms, and adopts their us-versus-them mentality. He starts watching his new friends’ YouTube videos, and is slowly drip-fed more and more extreme content. He begins accepting and repeating crackpot theories, falling victim to the Dunning-Kruger effect and rejecting mainstream science. He loses more and more friends. He starts believing conspiracy theories, and his obsession starts damaging his career and driving a wedge between him and his own family.

You see this progression all the time in the world of QAnon followers. Ordinary well-meaning people get sucked into these (mostly online) hate-cults, and they ruin lives.

Linehan was once a beloved figure who got nominated for comedy awards practically every year. Now he’s a pariah who apparently hasn’t had a TV series since 2017. There are rumors that he has quietly divorced; his wife has gone back to using her maiden name. So having alienated practically everyone in the UK comedy scene, what’s the next move for Glinner? He has started appearing on right wing YouTube channels, so maybe he’s going to move full time into wingnut welfare and write opinion columns? I’d rather see him reevaluate his life goals and return to comedy, but it’s hard to come back when you’ve burned so many bridges.

Twitter has made me, he once said. Now it has arguably ruined him. I think there’s a lesson there for all of us.